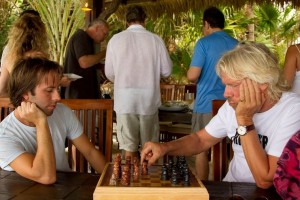 Sir Richard Branson is famous for many things. The billionaire founded the Virgin Group and his passions are risk-taking and innovating in as more areas than you can count, from telecommunications to space tourism to extreme sports. Now we can add to his passions the game of chess thanks to this tweet and a remarkable entry on his personal blog!

He met Garry last year at the Liberty Science Center’s “Genius Gala 2.0” where they were both award recipients. We are delighted to have the support of this powerfully placed Knight! He would make an ideal sponsor for chess in schools programs, don’t you think? Extreme chess?! 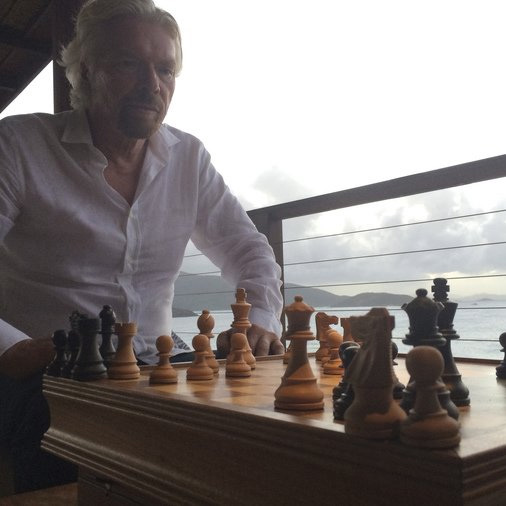 What is the best game in the world?

With the World Cup just days away, people around the globe are reaching fever pitch for the historic sporting event in Brazil. But before the big kick-off, I wanted to put forward another candidate for best game in the world. While my favourite sport is kitesurfing, closely followed by tennis, I think chess may just be the best game in the world. It combines the greatest aspects of many different sports – tactics, planning, bravery and risk-taking – plus you can have a cup of tea and often a stimulating conversation while you play!

I play a lot of chess myself and must have competed in thousands of games in my lifetime. Every game is different, and every player has their own strategies that make for a unique contest. I’ve found lots of entrepreneurs, in particular, are always keen for a game.

Perhaps it’s the need to take calculated chances to succeed that appeals – as well as the necessity of learning quickly from mistakes.

The game is believed to have originated in India around 1500 years ago; I often wonder who the genius was who invented chess. One of the most talented chess players of all time is Garry Kasparov, who became the youngest World Chess Champion aged 22 and famously took on the supercomputer Deep Blue. I was hoping some of his talent may rub off on me when we met and shook hands last year! As well as running his non-profit foundation to promote the benefits of chess in education, Garry is currently campaigning for the Presidency of the International Chess Federation, with a focus on the educational benefits of chess for kids and adults. It makes perfect sense for chess to be taught to young people, especially as the game is a great fit for mobile and remote learning.

It would be wonderful if everyone in the world could enjoy the competition and sense of achievement chess can provide. Do you agree it’s the best game in the world?

Don’t worry, I’ll be watching the World Cup along with the rest of the planet, but there’s more than one beautiful game!