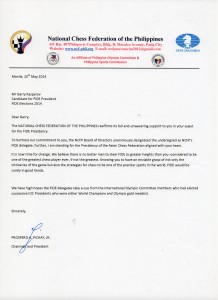 The NATIONAL CHESS FEDERATION OF THE PHILIPPINES reaffirms its full unwavering support to you in your quest for the FIDE Presidency.

To buttress our commitment to you, the NCFP Board of Directors unanimously designated the undersigned as NCFP’s FIDE delegate. Further, I am standing for the Presidency of the Asian Chess Federation aligned with your team.

It is now time for change.  We believe there is no better man to steer FIDE to greater heights than you — considered to be one of the greatest chess players ever, if not the greatest. Knowing you to have enviable grasp of not only the intricacies of the game but also the strategies for chess to be of the premier sports in the world, FIDE would be surely in good hands.

We have high hopes the FIDE delegates take a cue from the International Olympic Committee members who had elected successive IOC Presidents who were either World Champions and Olympic gold medalist.