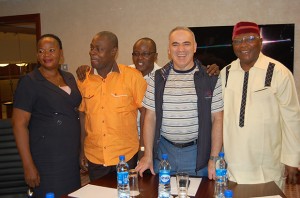 During all of his campaign and chess promotion travels, Garry Kasparov returns to a central message: “Politics, business, and education mix when you have the right recipe, and that recipe is chess!” His plan, to fund chess in education programs, national chess federations and FIDE itself with the balanced cultivation of commercial sponsorship and public investment. Instead forcing the federations to pay onerous fees to FIDE, the international federation will leverage its global profile to support and develop the federations.

“It’s an obvious win-win,” says Kasparov. “It’s relatively inexpensive to fund rapid growth at the grassroots level. In turn, the larger base of players and nations creates more commercial opportunities that improves conditions for the tip of the pyramid as well.”

That public-private model for chess in education and chess promotion was in full display during Kasparov’s recent visit to Nigeria. In fact, the opportunities seem so ripe, it’s left everyone on all sides wondering why FIDE had never taken an interest in such programs before. African chess has tremendous potential to change the global profile of the game as a dynamic educational tool and also as a truly global sport.

Garry Kimovich Kasparov arrived Nigeria on the 30th of January at about 8pm local time at the Nnamdi Azikiwe international airport Abuja. On arrival at the Transcorp Hilton hotel he met with the board members of the Nigerian Chess Federation. The meeting which lasted about 2hrs and was meant to inform the NCF board members on his plans for chess development in Nigeria. 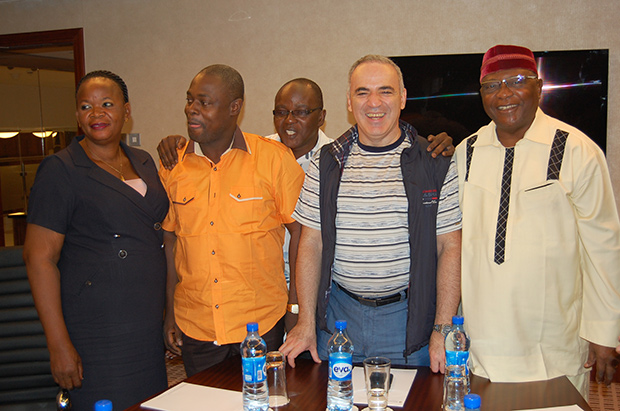 A celebratory atmosphere with the leadership of Nigerian chess!

On Friday, the 31st of January, Kasparov met with the officials of the National Sports Commission at about 10 am. The Honorable Minister for Sports, Mallam Bolaji Abdullahi, ably represented by the At. Director General of the National Sports Commission, was on hand to receive him. At 2 pm he was also received by the Honorable Minister for Education also represented by the Director of Higher Education at the Ministry, Mrs Omotowa. She on behalf of the Education Ministry pledge to support the plans of chess development in schools by the Kasparov Chess Foundation.

Kasparov and the KCF team departed Abuja for Lagos at about 7.45pm on Friday.

On Saturday at 11 am, Kasparov met with business tycoon Aliko Dangote and got his pledge of full-fledged support for KCF’s dreams in Nigeria. Business mogul Tony Elumelu also gave his unflinching support to the cause when he met with Kasparov at about 4.30 pm on the same day. On the 2nd of February Kasparov had a meeting with stakeholder of chess in Nigeria and also a press briefing at the intercontinental hotel, the Victoria Island Lagos. Afterwards he departed Nigeria via the Murtala Mohammed International Airport in Lagos.

By taking the game of chess to schools in under-developed nations, especially in Africa, the Kasparov Chess Foundation has brought a new world of possibilities to the African continent. His visit to Nigeria was a great show of his commitment to the game and to the realisation of his dream to develop chess at the grassroots. He also highlighted his ambition for the office of President of the World Chess Federation (FIDE). At the same time as the Russian Grandmaster made his historic visit to Nigeria, many pundits were of the opinion that the Lekan Adeyemi-led board of the Nigeria Chess Federation (NCF) looked set to lead the nation out of the doldrums with the formal introduction of chess in public schools. 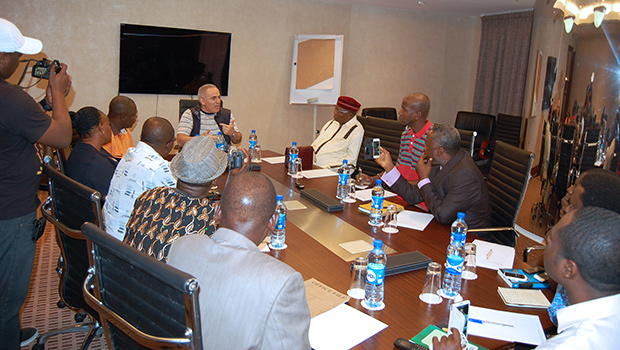 Adeyemi said that the entire board of the federation was delighted to receive the chess icon and that his team had opened formal discussion with Kasparov on the possibility of his Chess Foundation coming to play a key role in chess development among pupils in Nigerian schools. 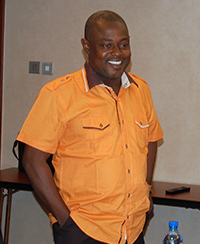 “We (the board) are glad that Kasparov and his team have come to work out the modalities for his Chess Foundation to operate here, considering its success in other developing chess nations. This Foundation has been in operation since 2012 and we are glad to be a beneficiary of this great icon’s intellect in chess,” the chess boss said.

The success of the separate meetings with the National Sports Commission (NSC) and the Ministry of Education officials in Abuja no doubt gladdened the heart of Kasparov, as he intends to return in September about a month after the election for the new FIDE president.

Kasparov said, “Although part of my mission here is to seek the support of Nigeria in my quest to lead the affairs of FIDE; my desire to see African nations develop in chess is also dear to me. My meetings with sports and education officials were fruitful. They were amazed that the project will not cost them any sum and all that the Foundation requested of them is the platform to succeed.”

Before he came to Nigeria, he had been having conversation with several prominent businessmen in the country and the visit was to conclude all negotiations towards the smooth take off of the project later this year. 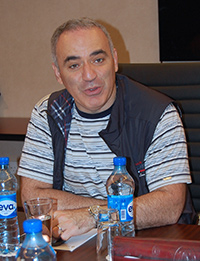 “I met with several prominent individuals here in Nigeria. It will be too early for me to start mentioning their names but at the appropriate time they will make official statements either collectively or individually. But one thing that is certain is,every money sourced would be spent in each of the countries. There will be no capital flight,” he asserted. “My mission is to elevate the game of chess from the grassroots level, to spread the game to schools as a cultural touchstone as well as a successful commercial success.”

The chess icon, if elected, has something special for Nigeria. He wants the President of NCF, Mr. Lekan Adeyemi to become the next African Chess Confederation (ACC) President. “Nigeria has a strong role to play on the continent and your President Adeyemi will fit into that position. I admire his vision for Nigerian chess and his talents will help develop and put in place a structure for the continental body,” he contended. Garry Kasparov’s visit brings with it enormous prospects for chess in Nigeria and Africa. 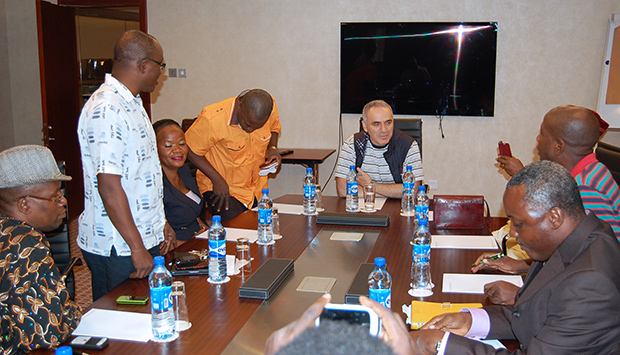