Kasparov’s Visit to the Philippines

Garry Kasparov’s Asian tour landed in the Philippines and it was a long and busy day indeed! He received a great welcome in the chess-mad nation, and spent a full day of meetings and events. Full report below by one of the Philippines many Grandmasters. (You may not guess how many!)

Former world chess champion Garry Kasparov, considered to be one of the most brilliant players of all time, together with the current FIDE secretary-general and ASEAN Chess Confederation president Ignatius Leong – who is now running as a member of Kasparov’s ticket – were welcomed at the airport by National Chess Federation of the Philippines (NCFP) president Prospero “Butch” Pichay Jr, Asia’s First Grandmaster Eugene Torre, and NCFP Executive Director GM Jayson Gonzales. 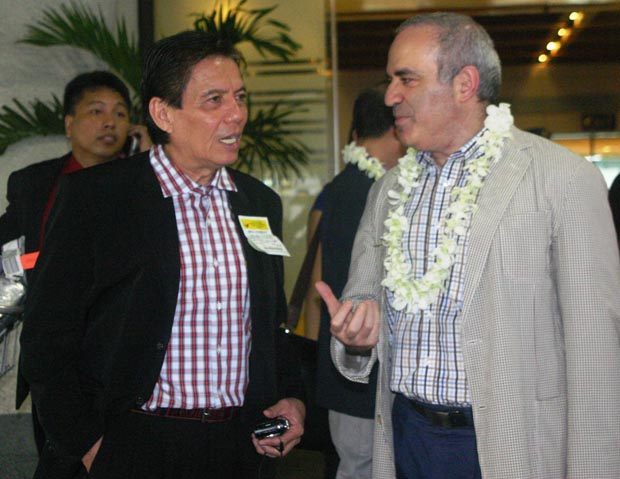 Kasparov had visited Indonesia, Singapore and Thailand, where he discussed his chess program and agenda in the Asian region as well as his candidacy in FIDE’s election next year. The last time Kasparov visited the Philippines was in 1992 during the Manila Chess Olympiad. At the age of 22, Kasparov emerged as the youngest undisputed World Chess Champion in history in 1985 by dethroning then-champion Anatoly Karpov. Kasparov is known by many as a writer, business speaker and human rights activist in his native Russia. 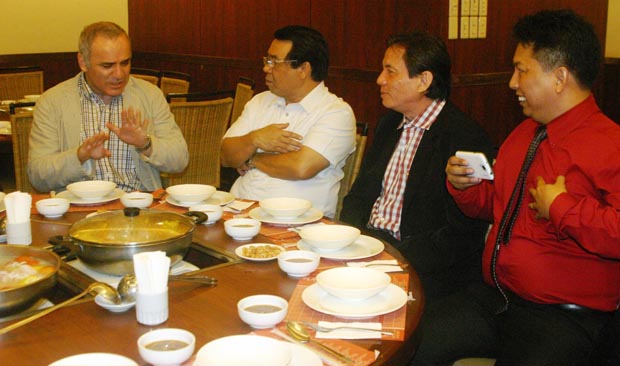 Now, the 50-year old Kasparov, whose name is synonymous with greatness in the chess world, is determined to broaden the interest of the sport. Queried if he is supporting Kasparov’s presidential bid for FIDE, Pichay said: “At the end of the day, you have to look at the program which shall really improve and popularize chess not only in the Philippines specifically but all over the world in general.”

Kasparov plans to reinvent, initiate major reforms and make chess more popular if he wins his bid to become president of the International Chess Federation (FIDE). “I’m not just here to campaign. I believe that if I should win, and I believe my goal is to carry through the reforms and treasure my reputation. And I will not let my reputation to be damaged by unsound promises,” Kasparov said shortly after yesterday’s one-day visit. “As of this moment, FIDE does nothing to promote the game and boost its prestige and I will definitely change that.” 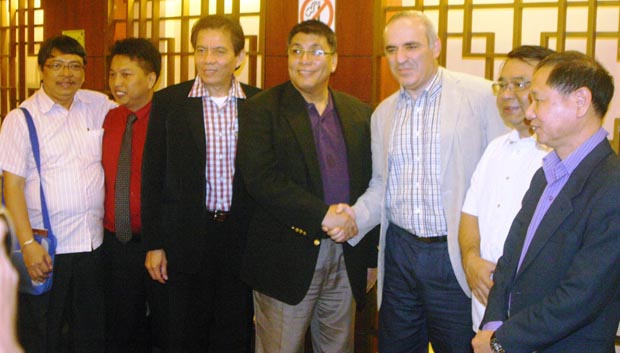 The FIDE elections is set for August next year in Norway, which coincides with the World Chess Olympiad. “I still believe we have obligations to the long-term future of the sport and that is why I wanted to come here and meet the Philippine chess federation to discuss things that of mutual interest along with important issues in the Asian region,” said Kasparov.

Aside from trying to convince the world to join his cause, Kasparov also declared that he will donate $10,000 from his own pocket to the victims of the devastating super typhoon Yolanda (Haiyan). 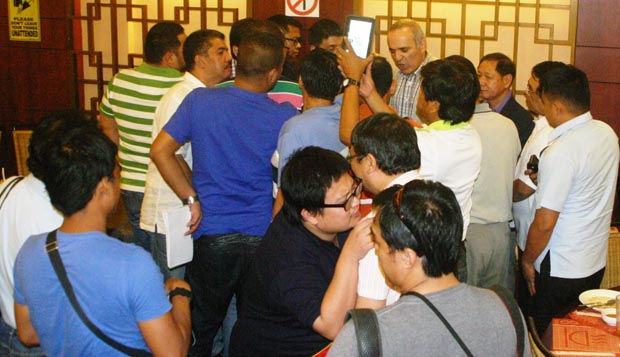 GM Garry Kasparov intently expounds with Philippine Media his agenda and program for FIDE, as he will run for FIDE General Assembly in August 2014.

Kasparov had lunch with the National Chess Federation of the Philippines Chairman/President Prospero Pichay Jr. together with Congressman Neri Javier Colmenares NCFP Vice- President for Visayas and NCFP Committee Chairman for grassroots and promotions, Judge Gonzalo Mapili NCFP Auditor, GM Jayson Gonzales NCFP Executive Director, and Asia’s first Grandmaster Eugene Torre. He conducted a press conference with the Philippine media expounding his platform for the FIDE presidency and the mission and vision that he wants the chess world to attain.

Then in the late afternoon, Kasparov went to the Philippine Senate to pay a courtesy call to Senator Aquilino “Koko” Pimentel III, who happens to be an avid and strong chess player and supporter. Likewise, he made his official visit to Philippine Senate President Franklin Drilon, both of whom wished Kasparov success in his Presidency bid at the 2014 FIDE Election General Assembly. 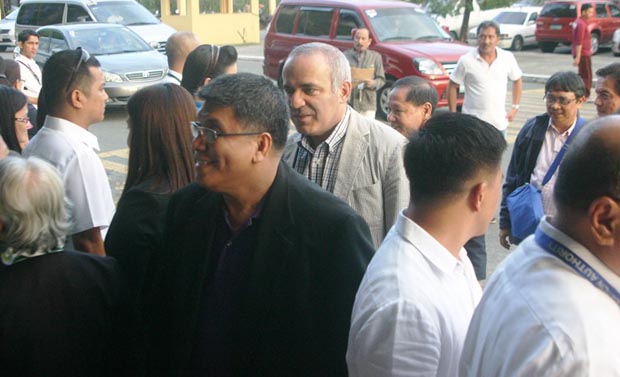 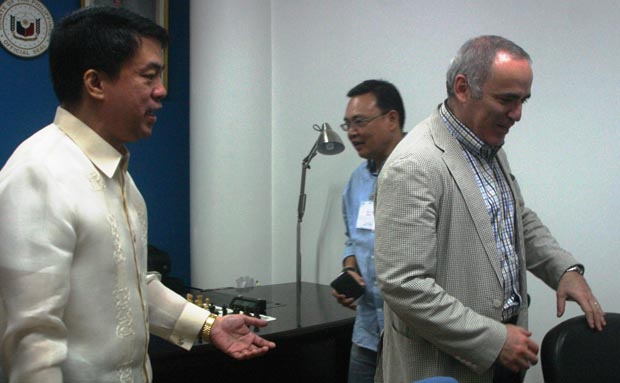 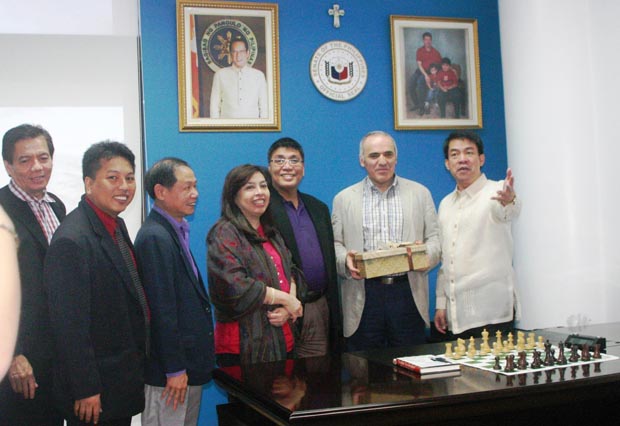 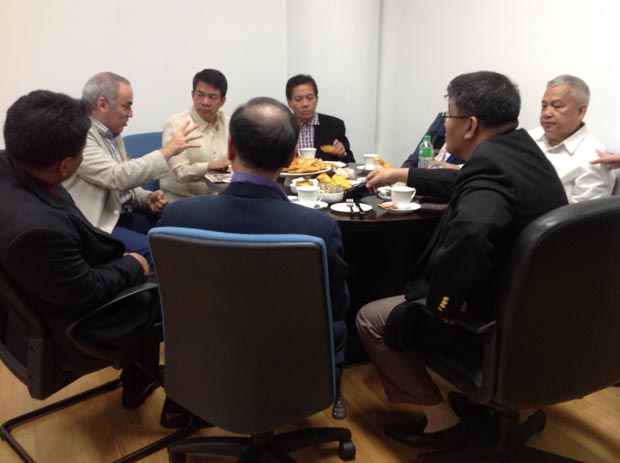 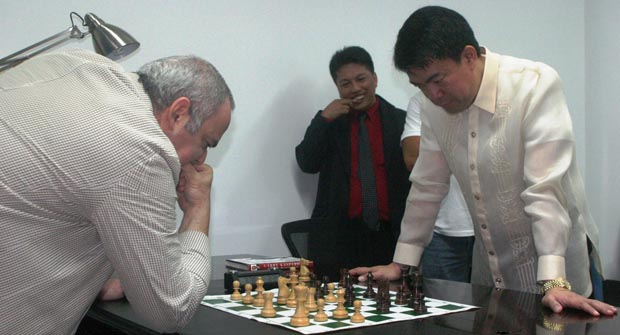 GM Garry Kasparov plays a 5 minute Blitz game with Senator Pimentel III. The former world champion won the match with the beautiful queen sacrifice; indeed, it was a very exciting and thrilling game! 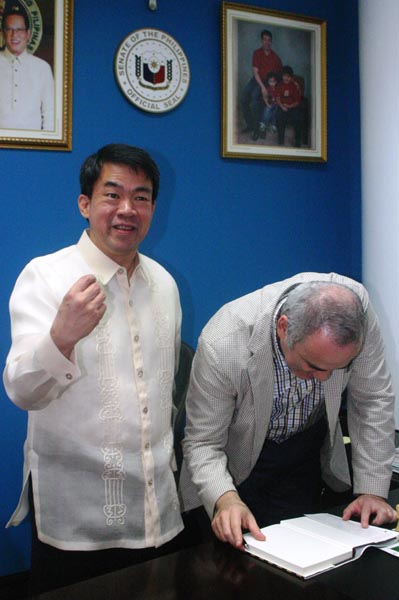 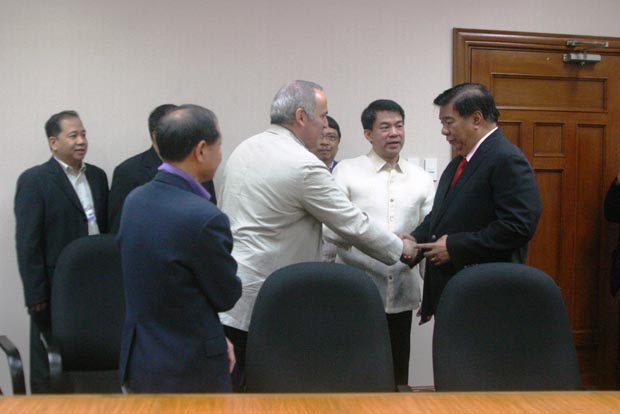 Afterwards, Kasparov had dinner with the Philippine National Chess Team, hosted by Senator Pimentel III together with the presence and additional appearance of other NCFP officials; Lawyer Ruel Canobas NCFP Vice-President for Luzon and Red Dumuk NCFP Deputy Secretary General and treasurer. A one-day visit but a long and fruitful day, indeed, for energetic and visionary Garry Kasparov!

[ That’s just a few of the Philippines’ 15 Grandmasters! ]