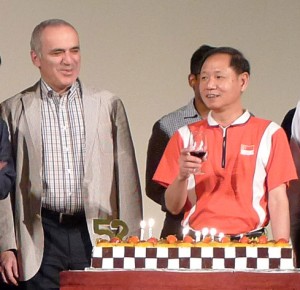 Garry collected some remarkable souvenirs along with endorsements during his first swing through East Asia on the campaign trail. He was received in very impressive and gracious fashion in Singapore and Thailand, as you’ll see below. Kasparov’s tour then continued to the Philippines, Macau, and Hong Kong and a full report on those visits will be published here soon. The launch of his tour in Indonesia was covered here.

Sponsorship, Education, and Technology the Focus for Kasparov in Singapore

The legendary former World Chess Champion Garry Kasparov was the Guest of Honour at the Singapore Chess Federation Awards Night on 16 November 2013. Kasparov, a candidate to become the president of FIDE (World Chess Federation), was on his second stop on his first tour of Asian countries that have pledged their support to the charismatic Russian, who is based in New York, USA.

The Grandmaster was a major draw, helping raise funds via the auction of his acclaimed book series “My Great Predecessors” and game collection “Garry Kasparov on Garry Kasparov”. 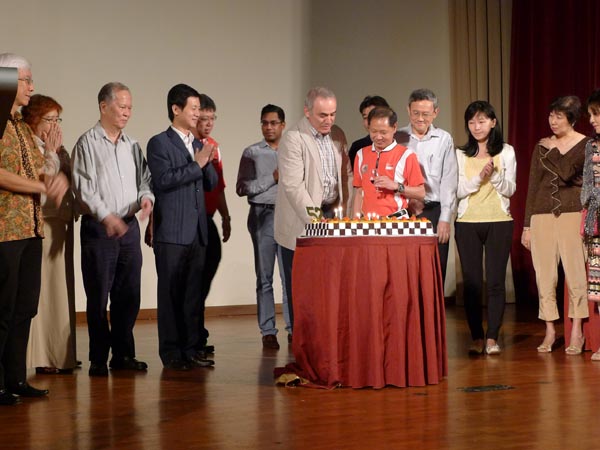 It was also a chance to celebrate the Singapore Chess Federation’s 52nd Birthday. Here Kasparov and Leong cut the cake. 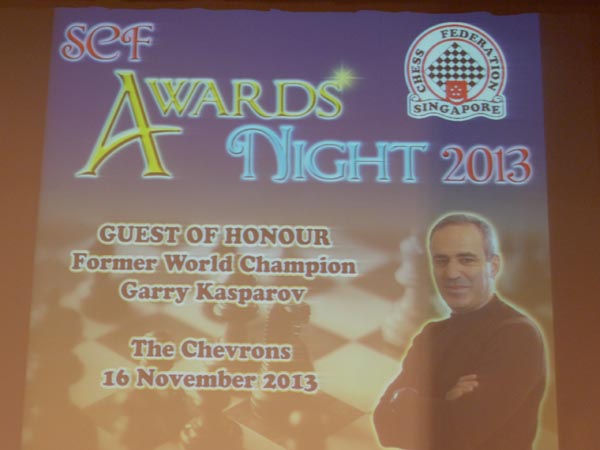 At his keynote address, Kasparov articulated a vision of chess that would bring Education up to the level of Sport in the focus of the World Chess Federation while at the same time ensuring that chess would duplicate the efforts of other sports in the adoption of interactive mobile technology that can fully engage and viewers and unite them into a global social network.

He was not only the big attraction but also proved to again be a major fundraiser. Garry impressed all present with his ability to articulate a well thought-out vision that is completely doable while also game-changing for world chess. 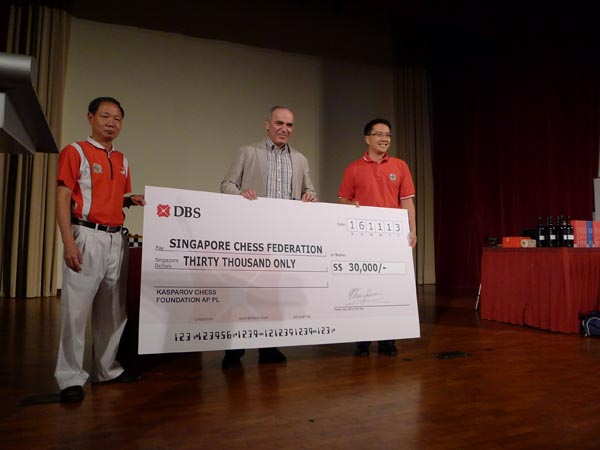 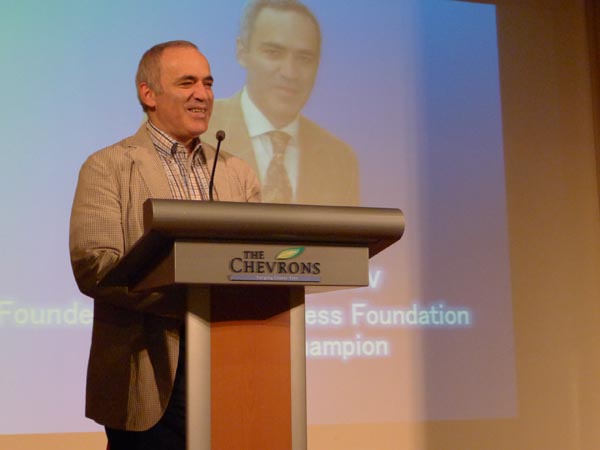 For Garry, teaching kids critical thinking skills is the greatest challenge facing governments, parents, and employers, and chess is a great tool to help educators in this mission. In the FIDE he hopes to lead, education will be one of the key strategic thrusts. It is not merely about chess in schools as a defined and formal program but chess as a means of contributing to child development and helping him or her reach their fullest potential.

A second focus will be proving that chess can indeed compete for eyeballs and be attractive to the media. The answer is using interactive mobile technology displayed on the now-ubiquitous devices that provide a user engagement equal to if not better than what another sports experience on a larger screen.

Ultimately Garry believes that the third and final component of this vision will be achieved by developing chess into a social network connecting the hundreds of millions of chessplayers globally. 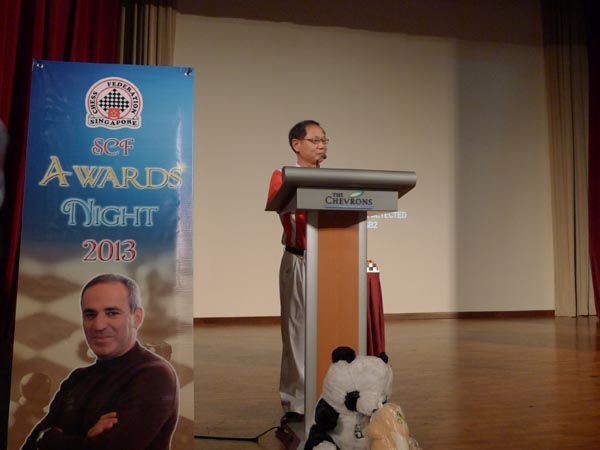 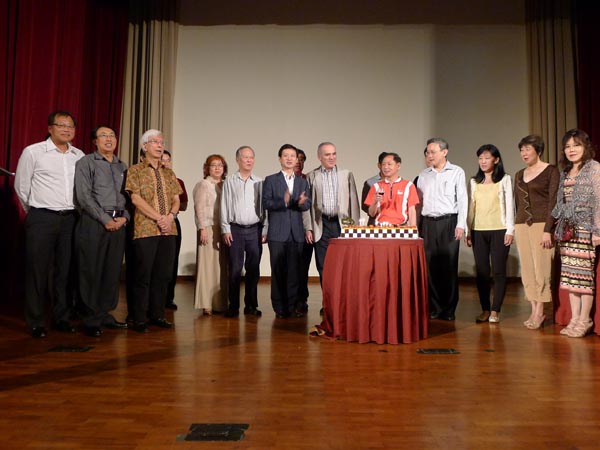 Kasparov Sees Chess of All Kinds in Thailand

FIDE Presidential Candidate Garry Kasparov and running mate Ignatius Leong arrived in Bangkok, Thailand, on the 19th November and received VVIP reception at the airport by the Secretary and Delegate of the Thailand Chess Association (TCA) Mr Panupand Vijjuprabha.

Immediately after checking into the hotel, they were whisked off to the Ministry of Finance where they made a call on Deputy Prime Minister and Minister for Finance, Mr Kittiratt Na-Ranong, who is also President of the Thailand Chess Federation. Kasparov and the Deputy Prime Minister shared their views on chess in Thailand, the region and the world. Mr Kittiratt agreed with Kasparov on how and why chess could play major roles in education and social networking. Mr Kittiratt endorsed the TCA’s support for the candidacy of Kasparov for FIDE President. The one-hour meeting concluded when Mr Kittiratt presented Kasparov with a Thai Chess Set and briefly explained the rules of the game.

Meeting at the Ministry of Finance with Mr Kittiratt 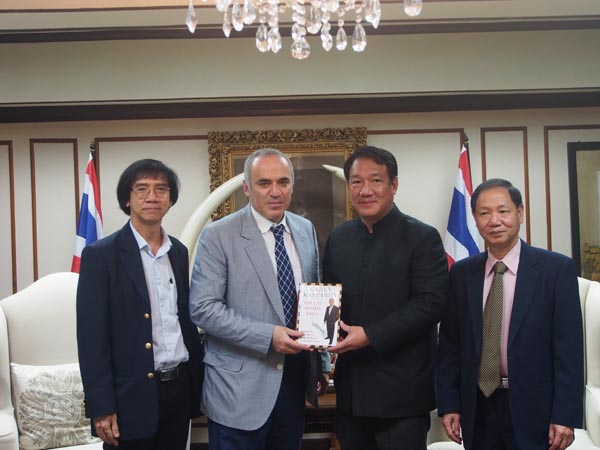 Kasparov presents his book to Mr Kittiratt; with Mr Panupand and Ignatius Leong (r) flanking them 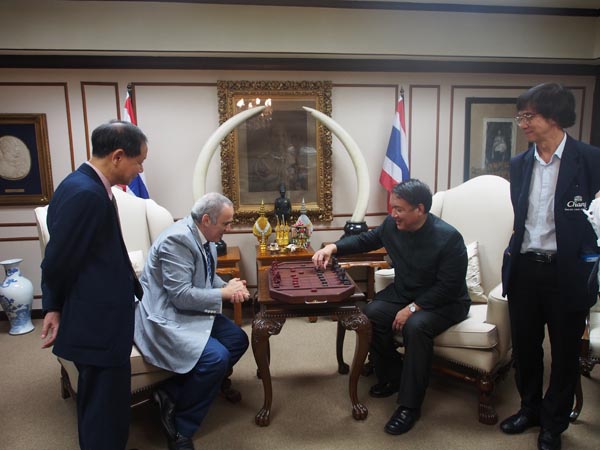 Kasparov then visited the Thai Chess Team in their Training Camp in preparation for the SEA (South East Asian) Games due to take place in Myanmar in December. TCA Vice President and Camp Commandant Mr Nararat Limnararat explained that the 26 players were selected by its National Olympic Committee to compete for the 18 gold medals available for Chess, Fischerandom Chess, Transfer Chess, ASEAN Chess and Myanmar Traditional Chess, which would be held in different time controls. They have been given time off from school and work to train there for 2 months and all the expenses are being funded by the National Olympic Committee. 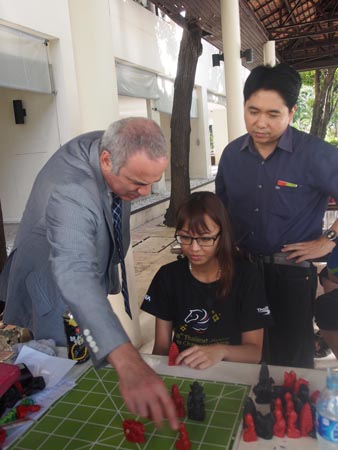 Kasparov: “I’m delighted to have the chance to learn about these different forms of chess, and also to see how popular they are. I can definitely see the potential of embracing different forms of the game to bring more players into the FIDE family. Top players of western chess play Fischerandom tournaments, after all.” 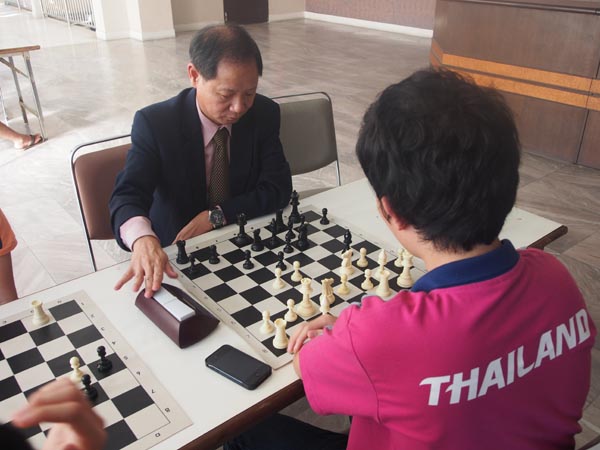 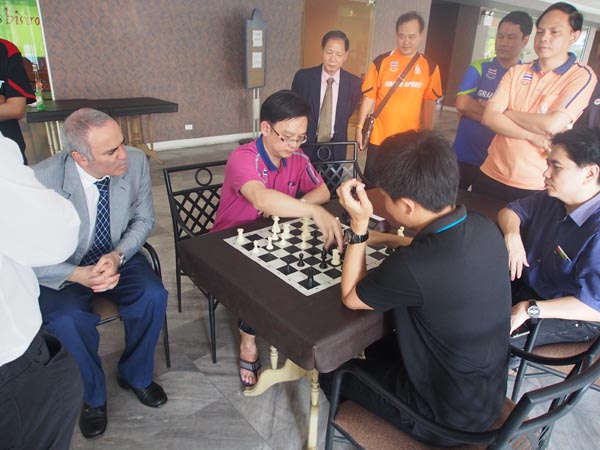 Kasparov watches as the players played a ASEAN Chess Blitz game. (Played with a standard western chess set, as many variants are.) 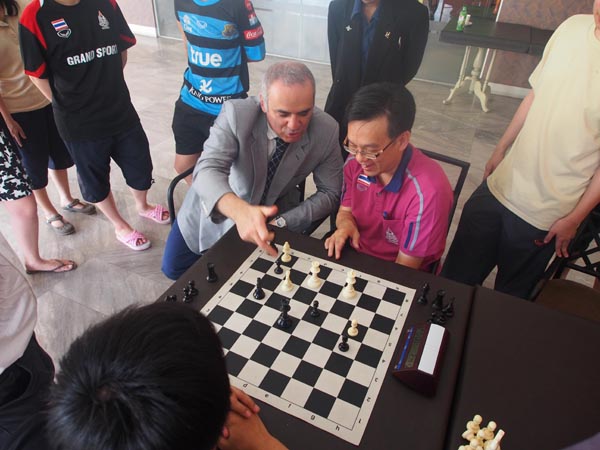 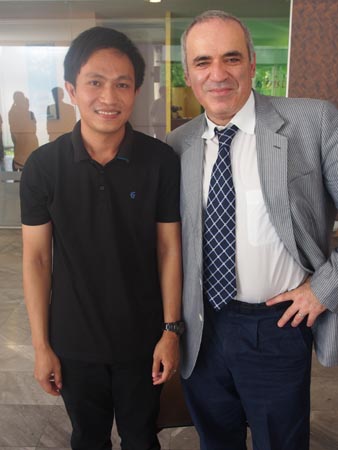 Uaychai Kongsee, the National Champion for Chess and Thai Chess! 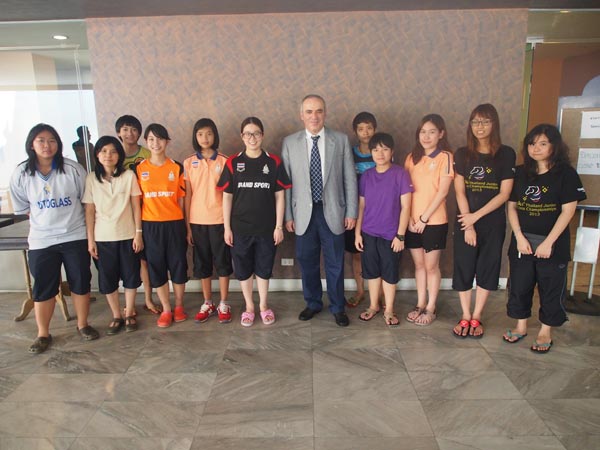 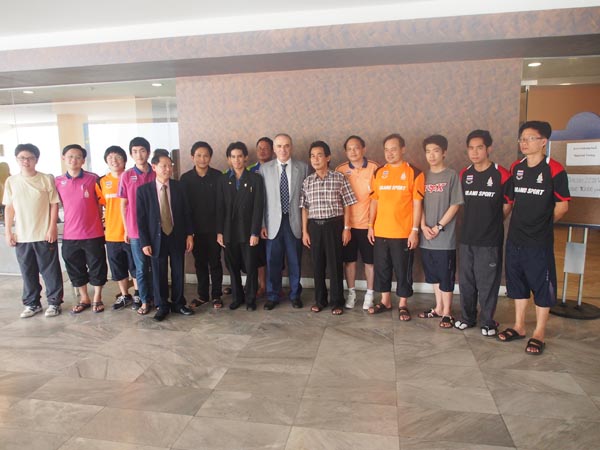 At the dinner hosted by Mr Kittiratt, Kasparov was introduced to several Board members of the TCA. They included Treasurer Sahapol Nakvanich, Rating Office Kai Tourila, Mr Mrirk Vanikkul (Governor of the Central Bank), Mr Kamolnai Chaixanien and Dr Palphol Rodloytuk. The TCA paid intensive interest in Kasparov’s plan to implement reform on the policies of the future of FIDE as well as on the roles of how key national federations in various regions could play to support the global activities in FIDE and the Chess in Education programs.

He added that the newly launched Kasparov Chess Foundation Asia-Pacific will help multilateral cooperation among regional federations depending on common needs and goals. Kasparov received resounding applause when Mr Kittiratt re-assured the support of Thailand for Kasparov for the FIDE Elections next year. 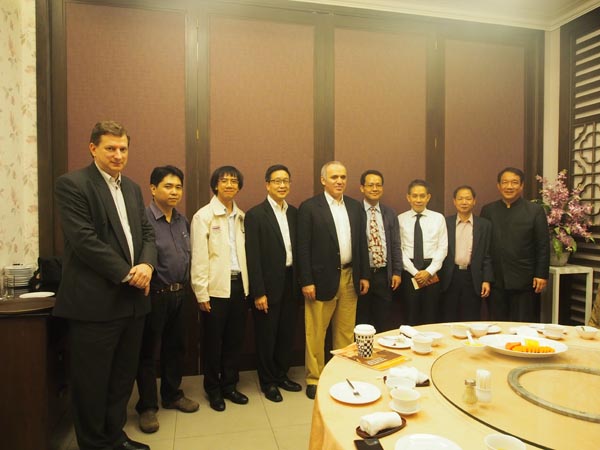 Dinner with the officials of the Board of Thailand Chess Association