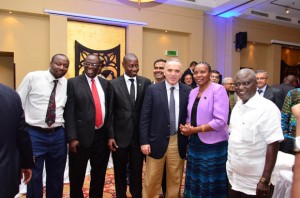 Garry Kasparov was very impressed by his hosts in Tanzania. Not only their kindness and hospitality, but their general level of preparedness and knowledge of chess in education. In many places, chess is seen as “just a game,” that can be used to give kids an incentive. But many studies, as well as the Kasparov Chess Foundation’s own results, show it is much more than that. It teaches logic, concentration, and also rewards hard work and preparation. For kids, gaining a sense of intellectual achievement is a lifelong boon. Kasparov and his team very much look forward to working with the experts and officials in Tanzania. There is also one more special reason…

“When I was a child, my father and I would read the stories of the great explorers and adventurers. One name always stuck in my head as a distant and magical place: Zanzibar! To be honest, when my plane was coming in to Dar es Salaam and the announcement said it would be continuing to Zanzibar, I was tempted to stay aboard. But now that I know just where it is, and how welcoming are the people of Tanzania, and how well our chess programs will perform here, I am sure I will have a chance to return soon to fulfill this childhood dream.” — Garry Kasparov

Legend Grandmaster Garry Kasparov , the former World Chess Champion and the Chairman of Kasparov Chess Foundation arrived in Dar es Salaam on 3rd February 2014 at Mwalimu Julius Kambarage Nyerere International Airport around 1:00 p.m. He was welcomed by the Chairman and Board Members of both Tanzania Chess Association and Tanzania Chess Foundation. 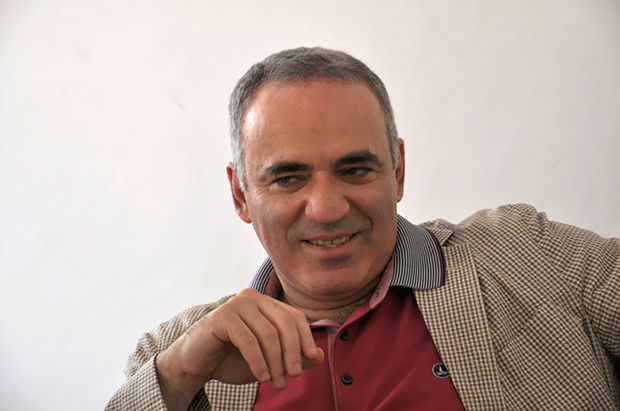 The Legend was on his tour to promote the game. especially Chess in School programs in Africa. It was a blessing to the Tanzanian Chess Association to host such a talented and most keen person on the development of chess around the Globe.

GM Garry Kasparov on 3rd February 2014 around 13:00 hours visited the Students and Management of 10 different Schools who were gathered at the Shabaan Robert Secondary School. The Grandmaster in his speech mentioned the many advantages of playing Chess and how it improves the academic standards of students. 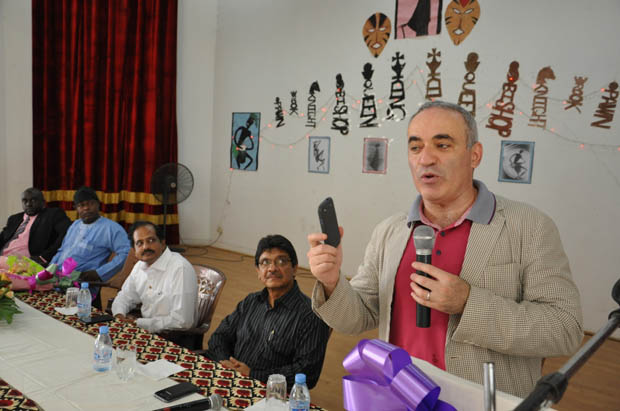 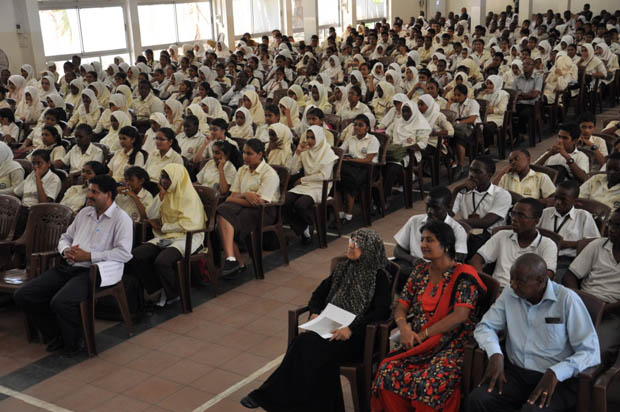 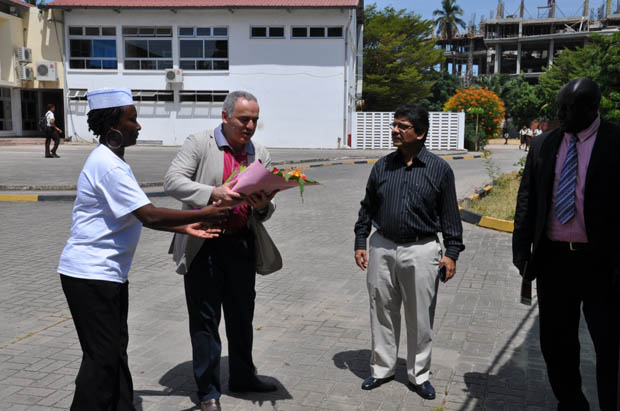 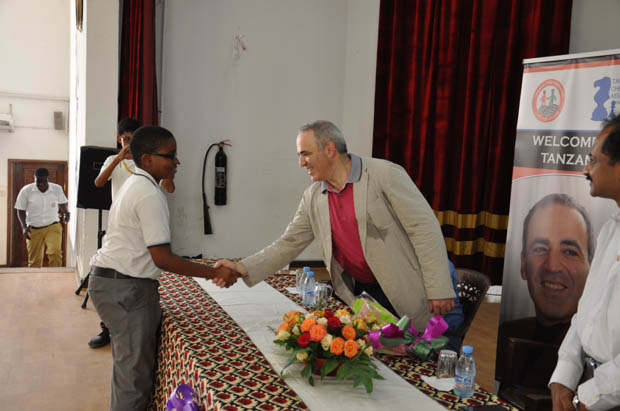 At 19:30 hrs, the Grandmaster attended the historic Corporate Networking Gala Dinner that was organized by the Tanzania Chess Foundation with the intention of promoting chess in schools under a project dubbed ‘Chess for Grades’, which was officiated by the Minister for Information, Youth, Culture and Sports Hon. Dr. Fenella Mukangara and Mr. Dioniz Malinzi, the Chairman of National Sports Council and Mr. Ali Nihat , the Chairman Commission for Chess in School Program-FIDE . The event was also attended by CEOs and heads of various organizations in the country and the Presidents and Board Members of the Federation of Nigeria, Ethiopia, Kenya, Uganda, Malawi, Rwanda, Burundi.

Chess for Grades is an initiative by the Tanzania Chess Foundation dedicated to promoting the game at schools as a way of enhancing students’ intellectual level as well as enabling the country to have professional players who can participate and win in international tournaments. GM Kasparov promised to provide his full support to Tanzania in development of this game. 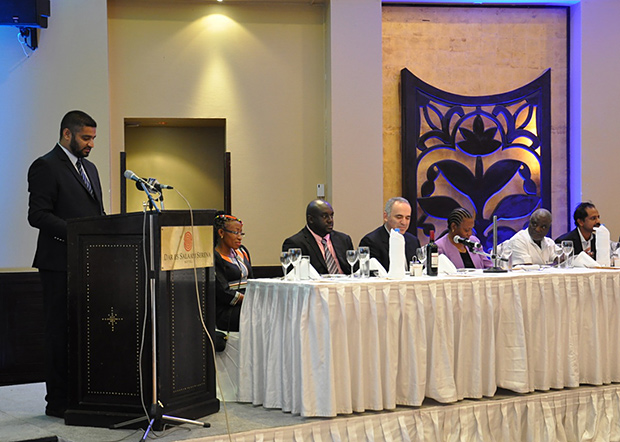 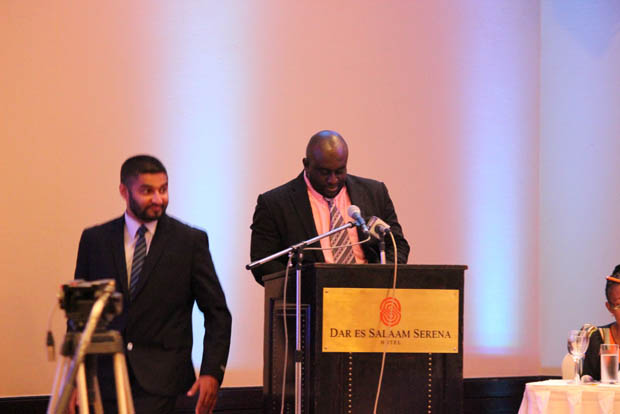 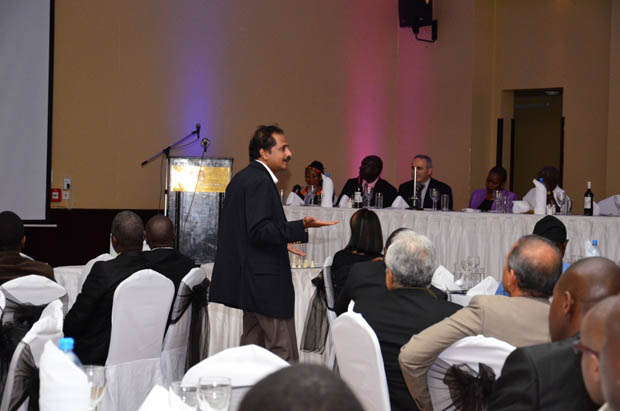 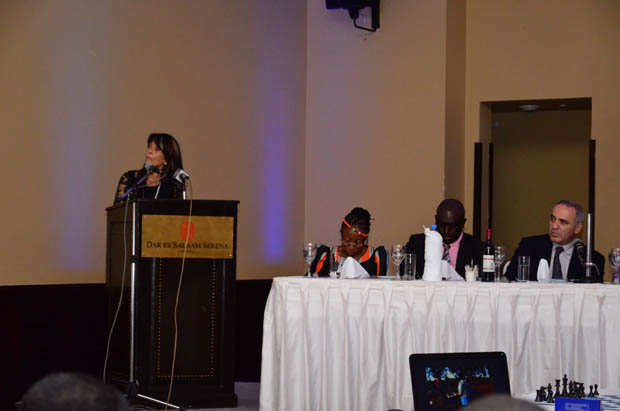 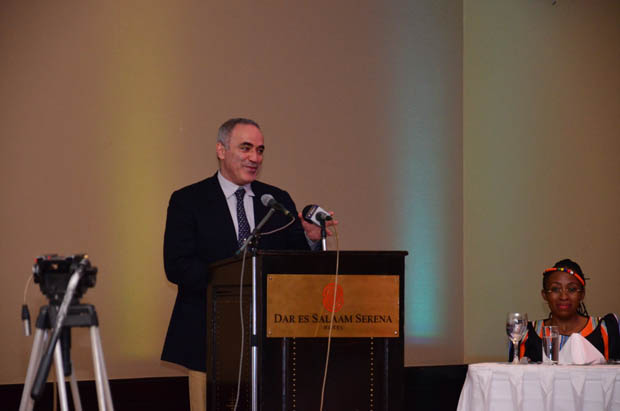 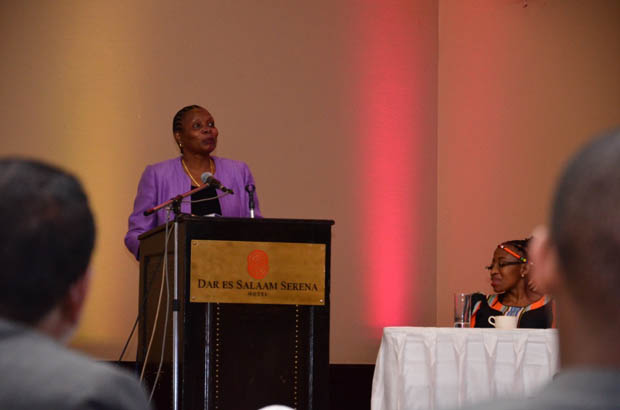 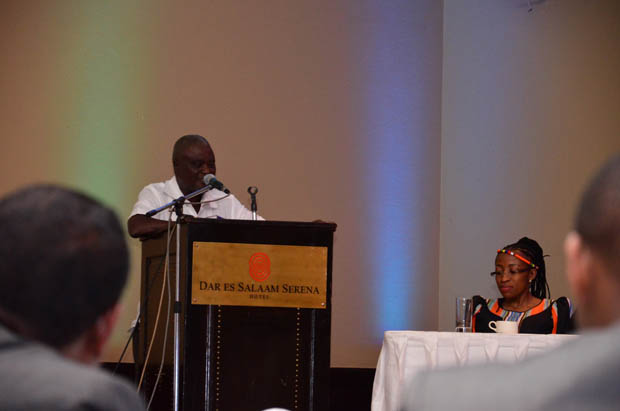 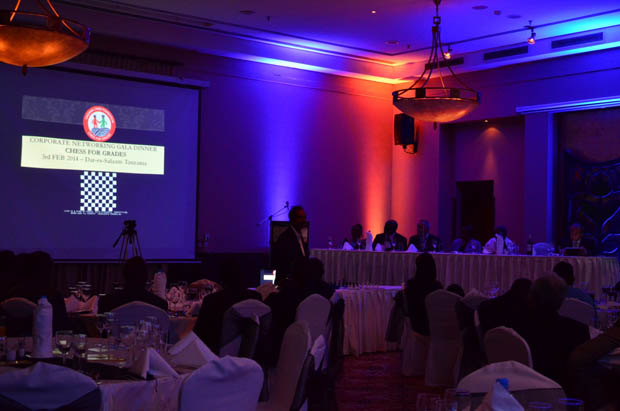 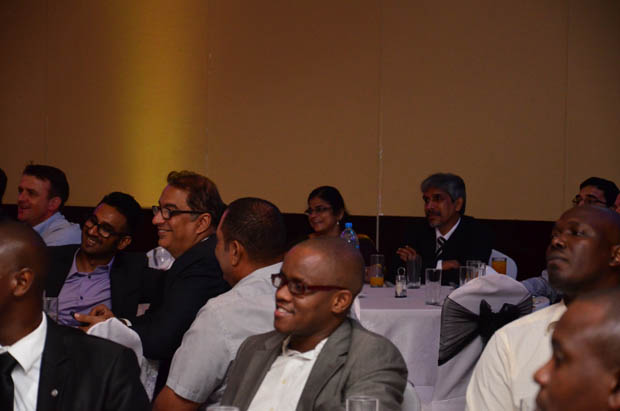 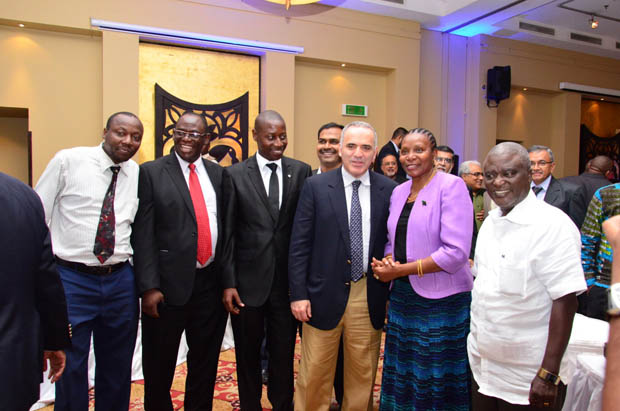 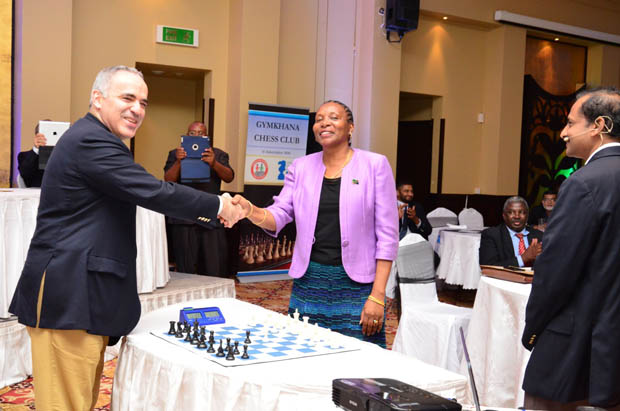 Opening of Chess for Grades Project 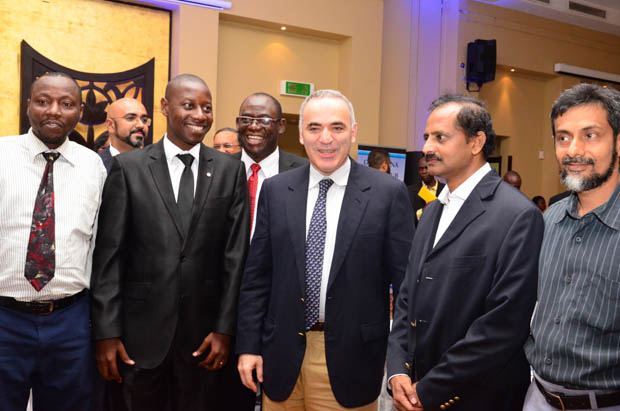 GM Kasparov with Board Members of Tanzania Chess Association 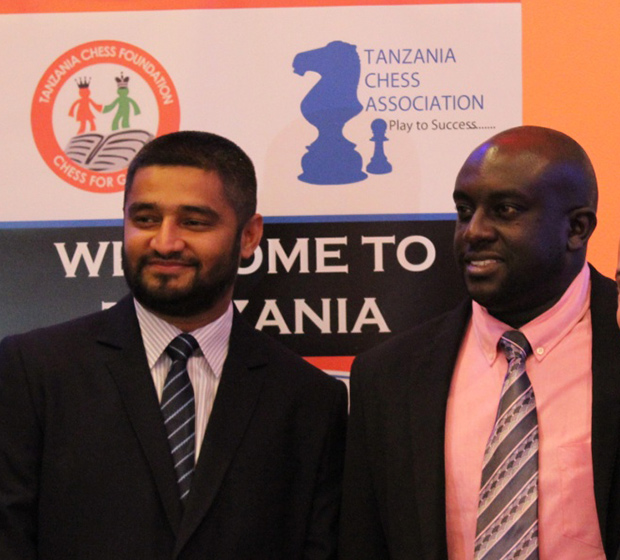 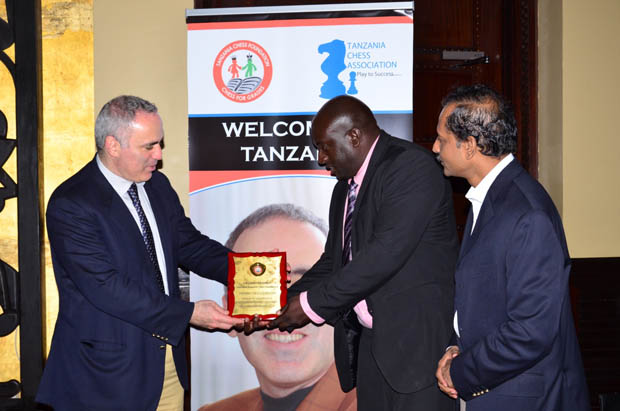 Token of appreciation by TCA and TCF 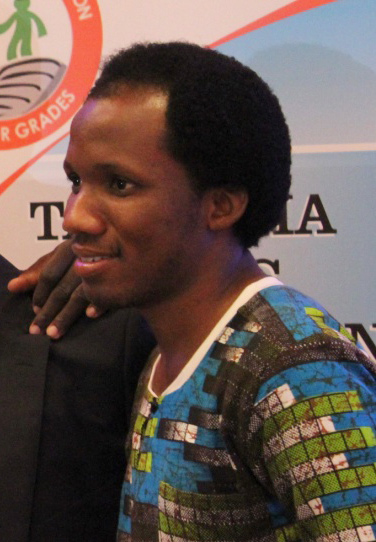 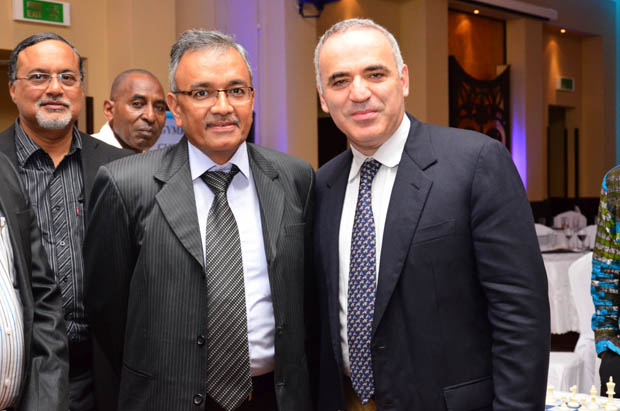 GM with CEOs and dignitaries 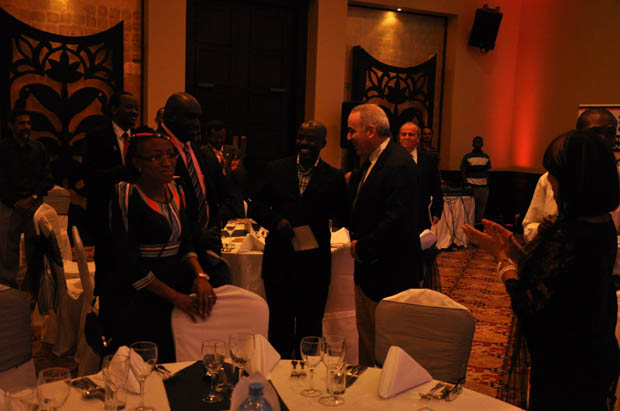 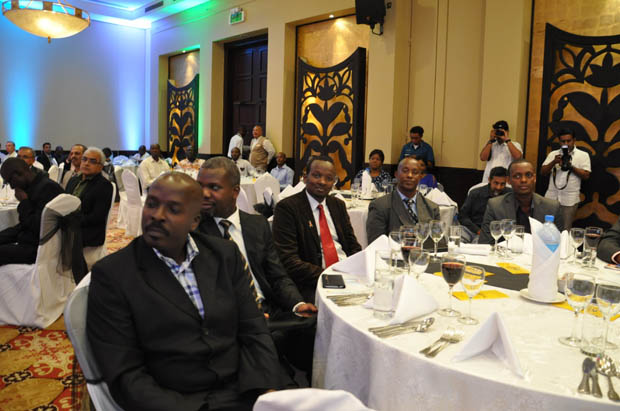 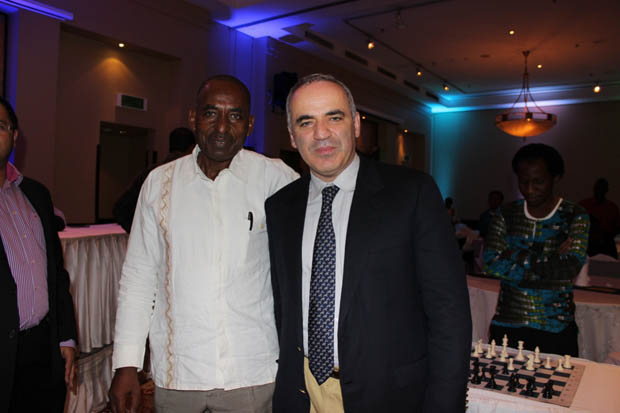 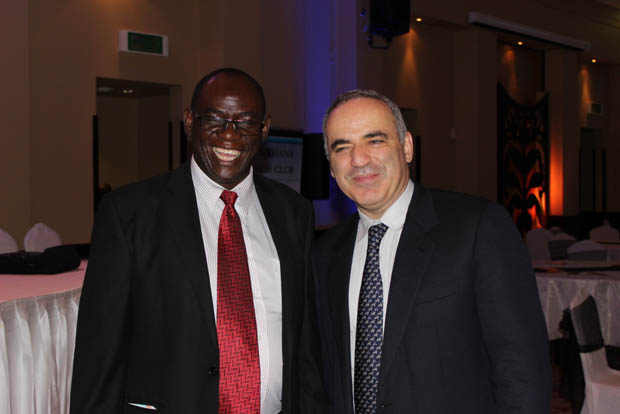 Both Hon. Mukangara and Mr. Malinzi where very much impressed by the initiative taken by Tanzania Chess Foundation and Association toward the development of this game.

On 4th February 2014 at 10:00 am, Garry Kasparov attended a meeting with the Presidents and Board Members from Chess Federation of Malawi, Uganda, Kenya, Rwanda, Ethiopia, Burundi. The main agenda was how to develop the game in the Continent of Africa.

On 5th February 2014 at 5:00 am the Grandmaster Kasparov flew to South Africa to his onward journey for the Chess in Schools project.