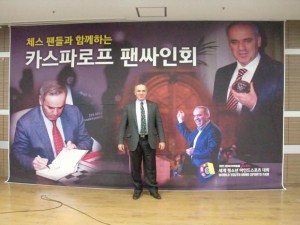 Kasparov Reaches Out in Korea

Garry Kasparov continued to break new ground and reach across many different boards during his campaign for FIDE president. As in Thailand, where Kasparov talked about how various forms of chess should work together to promote our classical western form of the game in places where it has yet to become as popular, in Seoul they talked with organizers of Baduk (G0) and eSports, both of which are very popular in Korea.

Kasparov: “It’s silly to ignore the locally popular mind sports when we have so much to learn from each other when it comes to sponsorship, education, and many other things. For example, Baduk is the dominant board game in Korea but it has not made any inroads into education. They don’t have the algorithm to make it useful to kids and teachers in schools. Here, chess has much to offer. And the way Baduk uses patterns, and how the team and team training concepts of eSports work, it’s all very interesting for the chess community.” 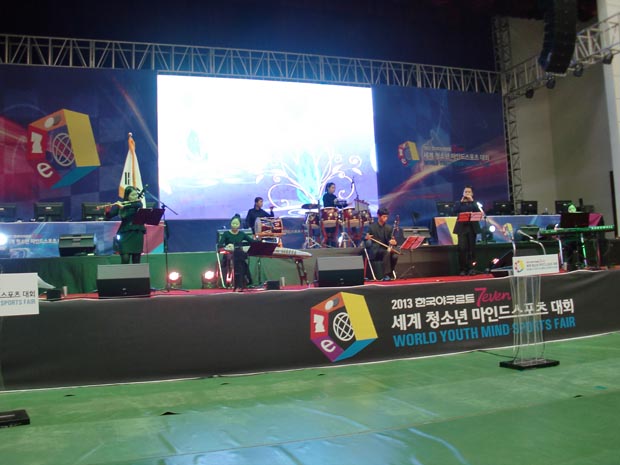 A Korean traditional musical performance at the Opening Ceremony of the World Youth Mind Sports Fair.

eSports are better known to many as video games, but the professionals play at an incredibly high level, with extensive training and preparation that rivals chess. Kasparov recently discussed eSports with fans and even some pros on Twitter from Korea. He admitted most of his knowledge comes from his teenage son’s obsession with World of Warcraft. The dominant game in Korea is League of Legends, with five players on each team. As in Baduk, Korea is the dominant global force in eSports, with many professionals living and training together! Of course chess is also an eSport in a way, with millions of online players.

When the news came out from Tallinn that Garry Kasparov announced his candidacy and his team for the FIDE Elections 2014, Mdm Hyun In Suk, President of Korea Chess Federation, immediately sent an email to Mr Ignatius Leong to extend her invitation to Kasparov to visit Korea on 26-28 December. Mr Leong responded immediately that Mr Kasparov had accepted the invitation but he would have to inform his mother, wife and three children as they had already planned to spend Christmas in Tallinn. Most urgently was that he needed to change his entire itinerary for that period.

After a long and tiring journey from Tallinn, he checked into his hotel and within 30 minutes, attended the Press Conference at the Seoul Foreign Correspondents’ Club. WGM Almira Skripchenko of France and Mr Leong were members of the Kasparov entourage. 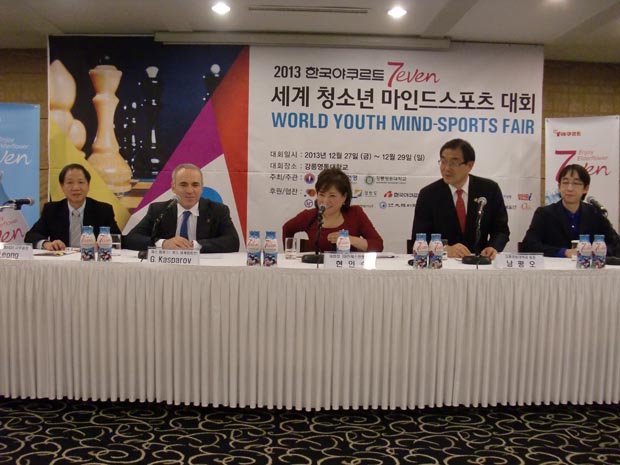 Early next morning, they took a 3 hour drive to Gangneung City. They were distinguished guests of the World Youth Mind Sports Fai organised by the Gangneung Yeongdong College of which Mdm Hyun is the Chief Director. The other distinguished guests were members of the Korean National Assembly and top professional Baduk (Go) players in Korea. The three day Fair includes only Baduk, Chess and E-sports. 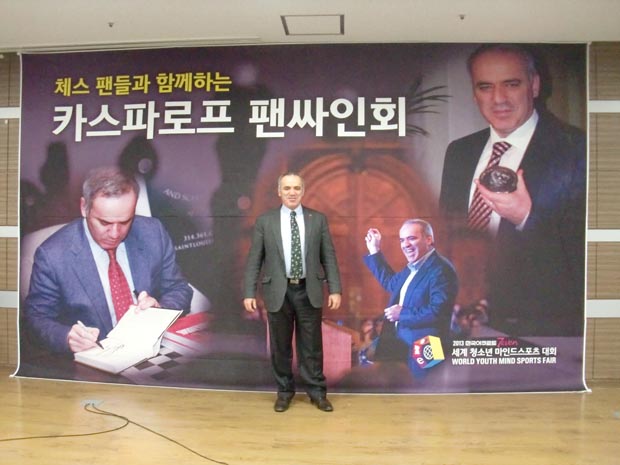 Kasparov in front of himself!

After the Opening Ceremony, more than 150 kids queued to have their books autographed. They also had the opportunity to get close up photographs with the King, who enjoys enormous popularity in Korea although Chess is not so popular compared to many other sports. 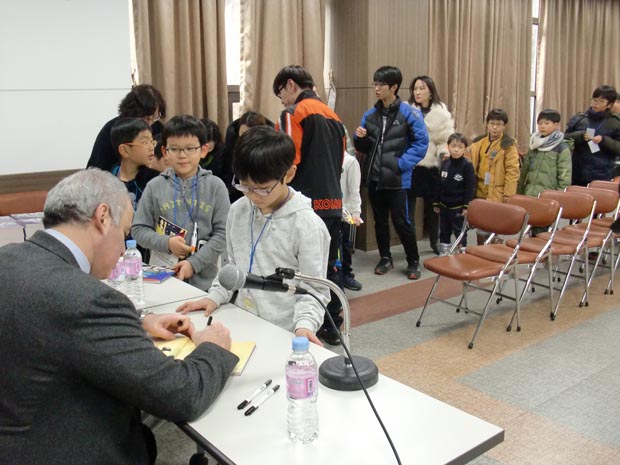 More than 150 kids queuing for their books to be autographed.

The meeting with Korea Chess Federation centred on how to develop Chess in Education. While Baduk has more than 300 professional players (almost all of whom don’t go to the university!), it has not been used as a tool in education. Mr Kasparov offered ideas and suggested joint efforts between the Chess and Baduk federations so that the program will mutually benefit the two mind sports. He also encouraged the Korea Chess Federation to play an active role in the region – and that administrative and technical support will come through both the new FIDE administration and the Kasparov Chess Foundation Asia Pacific. 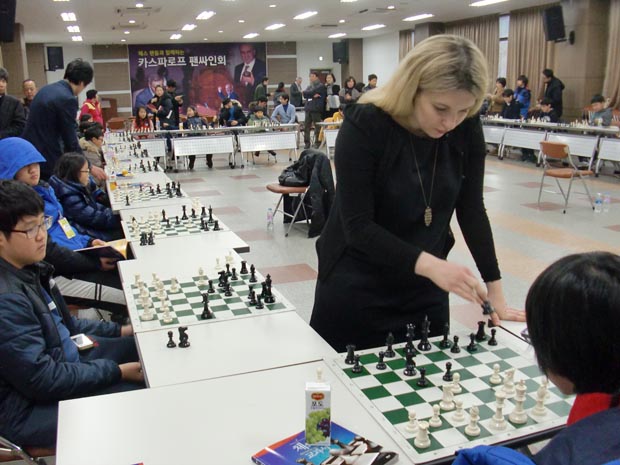 Mdm Hyun thanked Mr Kasparov for his visit and invaluable advice as well as encouragement. She also thanked Mr Leong who keeps REGULAR contact with our federation EVERY year for the past 10 years. She expressed gratitude to Mr Leong for his constant advice and long-time friendship which she said cannot be built once every 4 years. At the end of the meeting, she presented Mr Kasparov with her letter of support for the FIDE Elections! And acclaimed to Mr Kasparov that “We are all part of your Team”. 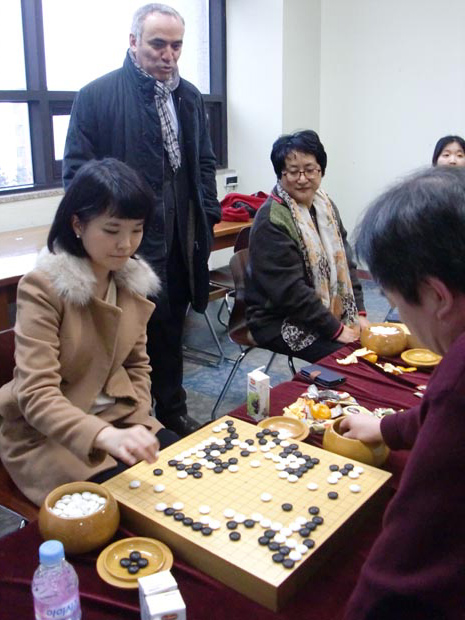 Watching the winner of 2 golds for Baduk (Go) at the Guangzhou Asian Games in 2010.