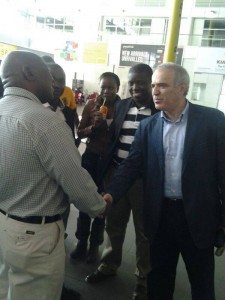 Visiting Russian Chess grandmaster Garry Kasparov says Zambia has a huge potential in the development of the sport as he lobbied the country to support his International Chess Federation presidency bid.
Kasparov said during a meeting with Chess Federation of Zambia executive committee members at Lusaka’s Radisson Blu Hotel yesterday that he is also confident of scooping the International Chess Federation (FIDE) presidency at the forthcoming elective congress slated for Norway in August.
“I know that Zambia is probably one of the strongest chess nations in the continent and definitely in the region. I know about the potential because I spoke to some of the players. I have got some impressions. I have also visited some countries in your neighbourhood, so I can compare,” he said. “I don’t think we should compare on the low level. Huge potential here, you only have a good starting position you have to do more.”
FULL STORY 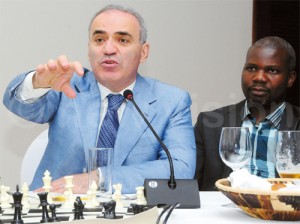 Kasparov talks to corporates and UCF officials during a dinner at Serena Hotel. Photo by Mpalanyi Ssentongo

UFOS, CORRUPTION, AND CANADIANS ARE AT THE HEART OF A WORLD CHESS FEDERATION ELECTION

A small group of Canadian chess aficionados have found themselves smack-dab in a geopolitical power struggle, at odds with the West’s efforts to isolate Russia, and allied with a UFO-fearing, millionaire mini-Putin.

This theatre of the absurd comes amid a hotly contested race for president of the World Chess Federation (FIDE). The race pits 19-year incumbent Kirsan Ilyumzhinov, an eccentric and repressive ex-President of a Russian enclave, against Garry Kasparov, a human rights campaigner and arguably history’s greatest chess player.

After several unsuccessful bids to unseat Ilyumzhinov, Kasparov is the best shot to wrest control of the organization away from Vladimir Putin, who critics say uses FIDE as an outpost to negotiate trade deals, and legitimize Moscow-backed autocrats. 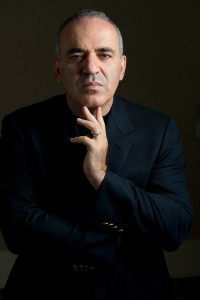 Kasparov, a Russian, said his engine was not the will to win, but his drive to make a difference.

He was addressing players in the third national qualifier hosted by Southern Chess Club.

Kasparov said winning should not be a player’s only motivation.

“To stay almost 20 years at the top, you have to have a desire to make a difference,” he said. 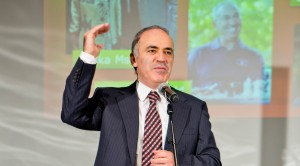 Garry Kasparov on hand to enforce the touch-move rule.

The long-overdue caucus, formed this spring, is co-chaired by two Missouri congressman, Republican Jason Smith and Democrat William Lacy Clay Jr., and is meant in part to highlight the emergence of St. Louis and the city’s Chess Club and Scholastic Center of St. Louis as a world-class venue for the game

. The U.S. Junior Championship, which kicks off Thursday, is just the latest national event to be hosted by the beautiful St. Louis site. 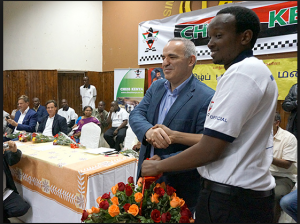 The 5,000 chess sets- worth Sh7.5 million -promised by the Kasparov Chess Foundation (KCF) finally arrived at the port of Mombasa last week. Chess Kenya (CK) in con- junction with the Ministry of Sports, Culture and the Arts, and the Ministry of Education will distribute them to 1,000 primary and secondary schools in all the 47 counties.

According to the CK chairman Mr. Githinji Hinga, “This massive 3 tons of chess equipment will transform the minds of thousands of children in Kenya, and the impact will be felt for decades to come.” He thanked the KCF for the generous sponsorship, and added that chess is on its way to becoming the game of the nation.

Russian world chess champion Garry Kasparov has announced that the Kasparov Foundation is interested in implementing programs to help introduce the game in Macau’s schools. During his third visit to the city, Garry Kasparov is participating in seminars held during the 2014 Asean Chess Championship, which is taking place in Macau between June 3 and 12. 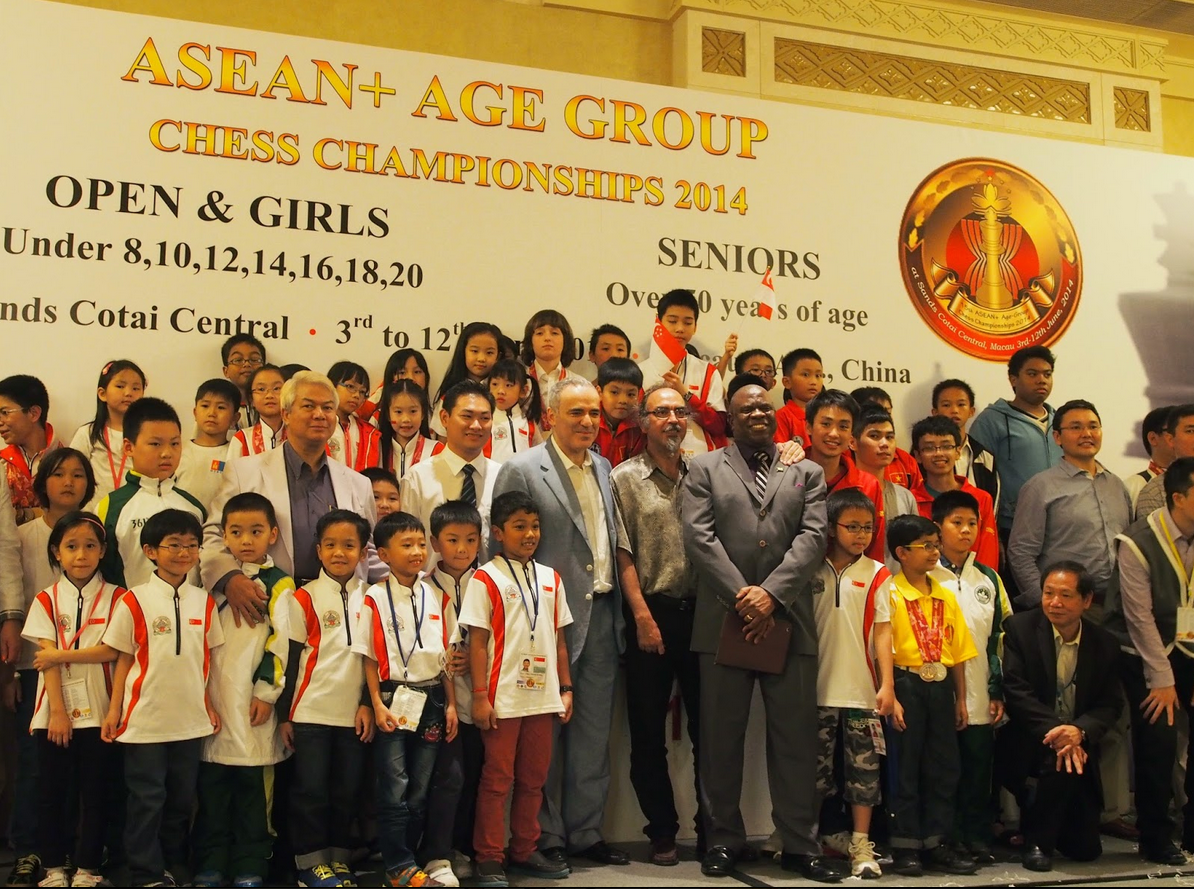 “The last time I was in Macau, we were able to hold good meetings and I think we can move forward [with our programs here] as we have experience, good programs and the right materials,” he told the Times, adding that the Kasparov Chess Foundation believes in the Macau government’s aim to “make a difference in the educational system.”

Garry Kasparov explained that they would be pleased to sign a memorandum of cooperation with the authorities and to start working towards introducing chess in local classrooms – one of the main goals of the Kasparov Chess Foundation.Although he recognizes that there is a language barrier, the former world champion believes that such a goal could still be accomplished in the MSAR.

“We are happy to go to any place in the world where people have an interest in our programs. I believe chess belongs in the educational system and in years to come will be a part of the curriculum,” – the Russian chess master declared.

WHAT IS THE BEST GAME IN THE WORLD? 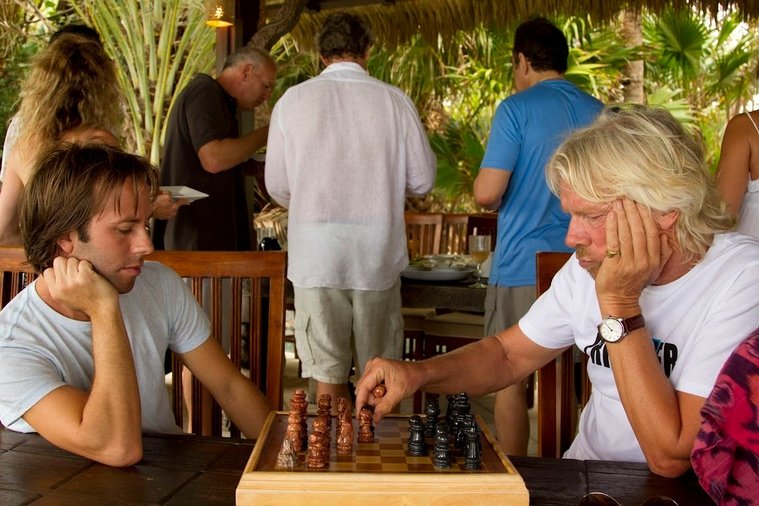 With the World Cup just days away, people around the globe are reaching fever pitch for the historic sporting event in Brazil. But before the big kick-off, I wanted to put forward another candidate for best game in the world. 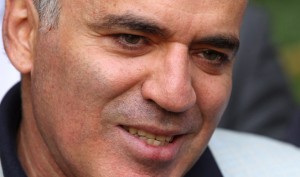 While Ilyumzhinov says he has poured his own fortune into chess development, Kasparov contends the chess leadership has failed to attract corporate support and that he would address this “fundamental problem” if he wins the votes of most of the world’s 160 chess federations. At stake, Kasparov says, is the profile of an ancient game that has struggled for mass appeal at times despite the growth of Internet chess and school programs.

“This could be a breakthrough moment because there is no shortage of sponsorship money or charitable donations in the world,” Kasparov said in the interview last month. 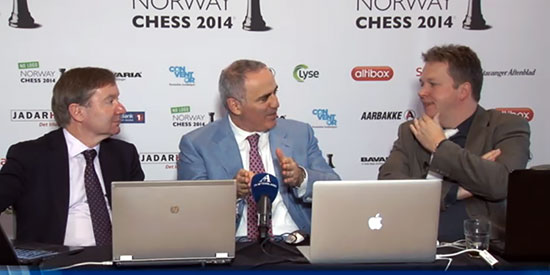 During the first round of the Norway Chess tournament, Garry Kasparov appeared in the commentary box hosted by Dirk Jan Ten Geuzendam, editor-in-chief of New in Chess, and Nigel Short. While analyzing the games in progress, he also answered questions regarding players such as Caruana and Karjakin, and clarified a number of points on the campaign. He didn’t mince words.

“There are many countries in Africa that have never seen a  FIDE official, much less the FIDE president. For decades no FIDE official ever set foot in south of the Sahara. There is also a question of ethics. They have been using FIDE resources to run the campaign and they are disguising it as working trips. (…) I mean, come on, every trip is about soliciting votes, and they are not even hiding it.

For instance in Tunisia there was a tournament and Ilyumzhinov visited the tournament and it was the decision of the presidential board to invest $50 thousand. These are FIDE funds. If you’re going to run a campaign, run your own campaign.

These are all things that affect your campaign or your chances. When FIDE announces that the elections are going to take place, and they present both candidates, and they say that this number of countries are supporting Ilyumzhinov, you can look at this number and think maybe this is not entirely true, but what can you say about this?

Let’s be honest. It’s a trick, because nominations, for many countries, do not mean support. So nominating the existing president to run, for many countries, it just means showing respect. I won’t give exact numbers, but you will see soon that many of these alleged supporting federations will not be on Ilyumzhinov’s list, they will appear on our list. (…) I think by mid-June the numbers will be significantly different.

Is it going to be a close race?

(…) The fact that the incumbent has been visiting countries that he never would have thought of before, demonstrates that they also recognize that despite their claims that the election is over, we have a sizeable lead, they recognize it is a fight for every vote. That’s why it will continue and I think the elections will be decided in Tromsø.”

Garry Kasparov “Transforming a Generation” at the NY Forum in Gabon. 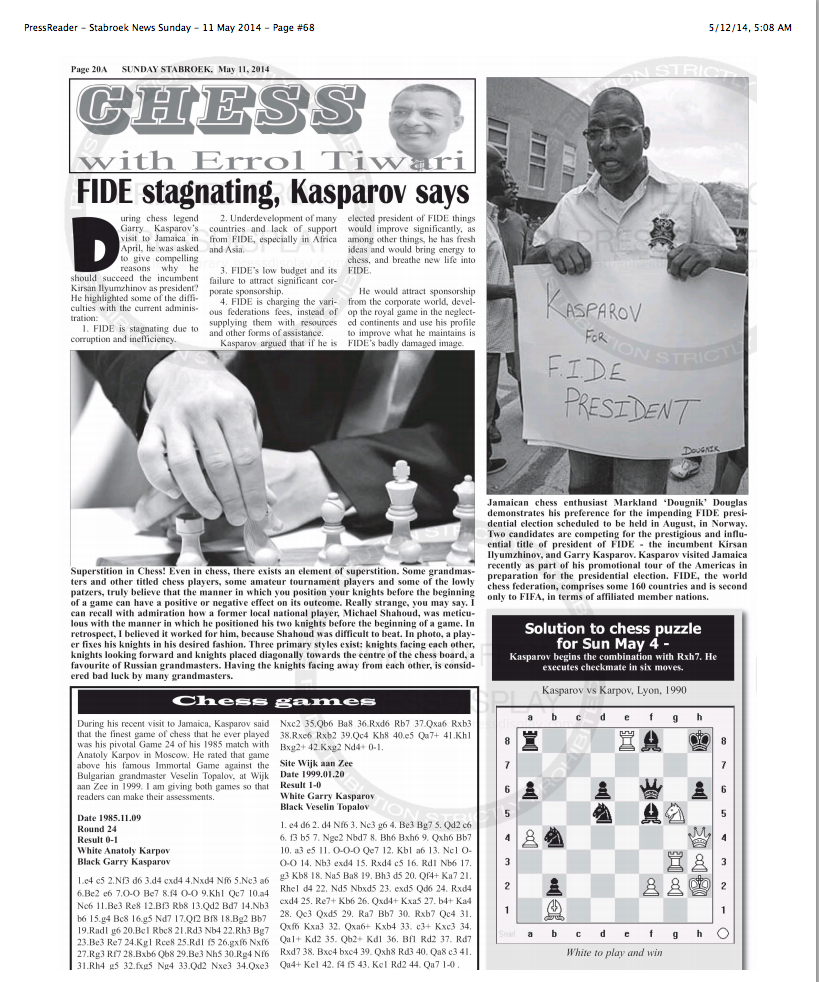 During chess legend Garry Kasparov’s visit to Jamaica in April, he was asked to give compelling reasons why he should succeed the incumbent Kirsan Ilyumzhinov as president? He highlighted some of the difficulties with the current administration:

1. FIDE is stagnating due to corruption and inefficiency

2. Underdevelopment of many countries and lack of support from FIDE, especially in Africa and Asia

4. FIDE is charging the various federations fees, instead of supplying them with resources and other forms of assistance. 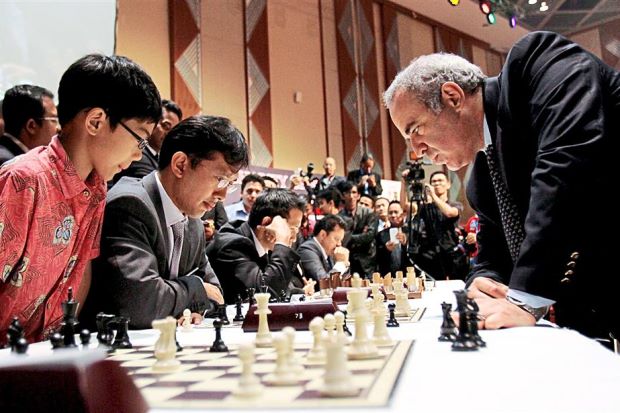 Kasparov was in Malaysia last month to help promote chess in education and campaign for his bid to become the next president of the World Chess Federation (usually known by its French acronym, FIDE, for Fédération internationale deséchecs).

His trip here was organised by the Malaysian Chess Federation and the Umno Youth Economic Bureau.

One of the events he attended was a charity chess drive dinner held at the Putrajaya International Convention Centre. 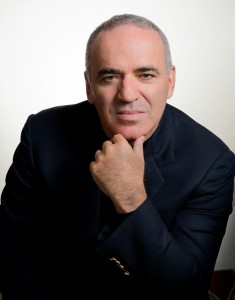 Former world chess champion and grand master Garry Kasparov has slammed world chess governing body FIDE for failing to get sponsorship for the World chess championship match between Magnus Carlsen of Norway and Viswanathan Anand of India which will be held on November 6 at a venue yet to be announced.

The chess legend who was in Uganda last week campaigning for the next FIDE elections slammed the world chess body in a tweet directed to the leader Kirsan Ilymuzhinov.

Not surprisingly, former World champion Garry Kasparov, never a fan of FIDE or its current president Kirsan Ilymuzhinov, has criticised sharply the world governing body’s inability to find a sponsor for the Carlsen-Anand match.

“It says everything when Ilyumzhinov’s FIDE cannot find sponsorship for a World championship match with charismatic young World champion,” he tweeted. 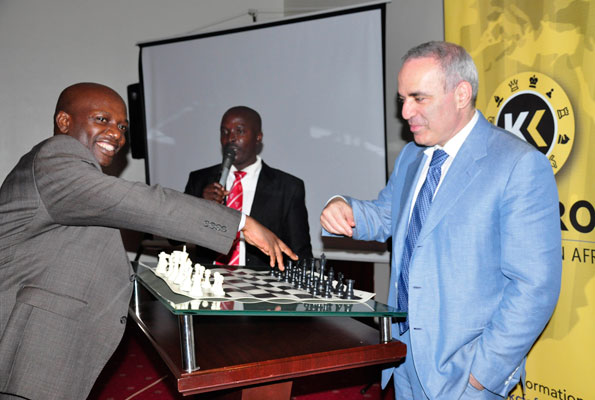 A chess enthusiast takes on Kasparov during an exhibition game in Kampala on Thursday. Photo BYGEOFFREY SSERUYANGE

So far, only one candidate has registered to unseat Kirsan Ilyumzhinov as president of the World Chess governing body, FIDE Garry Kasparov. And, in connection to his campaign he returned to Uganda this week to try and garner support to unseat Ilyumzhinov, who has led Fide for 18 years. FULL STORY 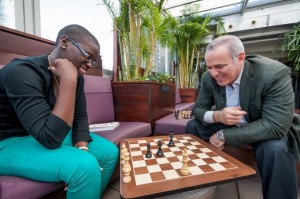 Former World chess number one player, Grand Master (GM) Garry Kasparov has lauded the diligent effort of the Uganda Chess Federation (UCF) towards promoting the game especially among the youth.

“Surely Uganda is on the right track. The Uganda Chess Federation is commended for their effort to teach the game to youngsters and maintaining the crop of great identified players”, Kasparov said during a special press conference held at Copper Chimney restaurant in Lugogo on Friday.

Kasparov is in Uganda for a two day visit. His visit to the ‘pearl of Africa’ is envisaged by many as a platform to solicit for solidarity among the East African nations ahead of the forthcoming world FIDE elections set to take place in Tromso, Norway in August 2014. 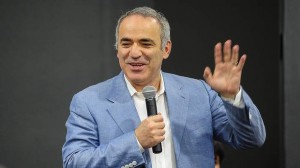 Grandmaster Kasparov still has everything to play for

Never one to play politics poker-faced, he also took aim at the present FIDE president and fellow countryman Kirsan Ilyumzhinov.

Mr Ilyumzhinov has publicly announced he had been abducted from his apartment by aliens and was frequently photographed with Libyan dictator Muammar Gaddafi before his death.

Mr Kasparov said the Australian government should recognise chess as a sport and that the game must try to attract more sponsors globally. There seemed to be no corporate backers of the game apart from a few clandestine deals involving Russian oligarchs, he said.