Before our campaign team had even arrived in Tromsø, Norway, the site of the 2014 Olympiad and FIDE presidential election, all we were hearing was, “Kasparov is everywhere!”

What people meant was clear as soon as you got off the plane. Kasparov posters in the airport, Kasparov cars, Kasparov banners, Kasparov signs at the hotel! The profile logo of the Team Kasparov campaign is everywhere here, and so is Team Kasparov itself! Dozens of volunteers, Continental allies, and members of the ticket are on the ground in Tromsø, with more on the way. Social media was abuzz with the impressive presence.

And Kasparov is everywhere! #tromso2014 pic.twitter.com/ulWqQfjP7v

I am definitely in Tromsø! Didn't see any Kirsan posters yet. pic.twitter.com/BEKZH5Bn6x

@TarjeiJS “I am definitely in Tromsø! Didn’t see any Kirsan posters yet.”

Of course the candidate himself soon followed, arriving on the evening of July 31 to meet with the campaign team and ticket to plan the endgame of this long and tight election campaign.

The first official Garry Kasparov event in Tromsø was not really about chess politics at all. He gave an hour-long lecture at the university student house DRIL! His themes were the ones top companies like Google and IBM, universities like Oxford and Stanford, and political organizations and business conferences around the world have invited Kasparov to speak on for years: decision-making, leadership, Russia’s relationship with the West, and the need to return to the principles of risk-taking for people and management. Kasparov: “this audience isn’t here to hear about chess politics and I’m sure they will be hearing enough about that in the next ten days!”

In fact, it was a question from the audience after the ovation from the packed house brought the animated Kasparov back to the matter at hand, the FIDE election! 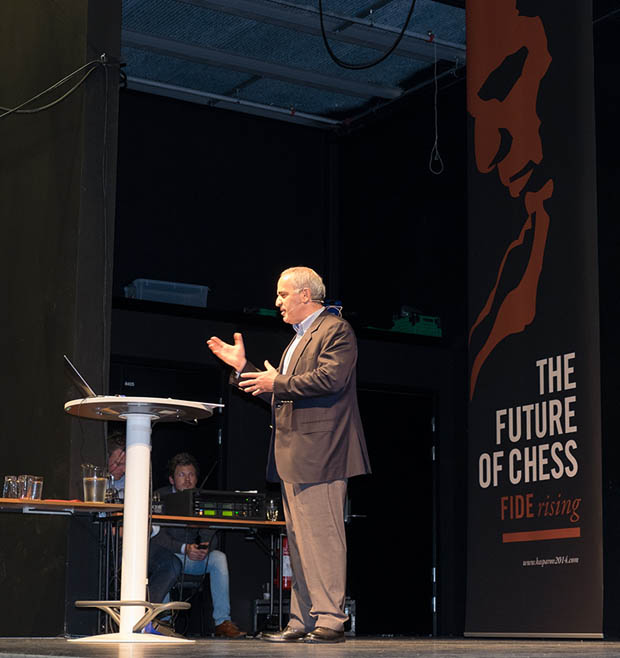 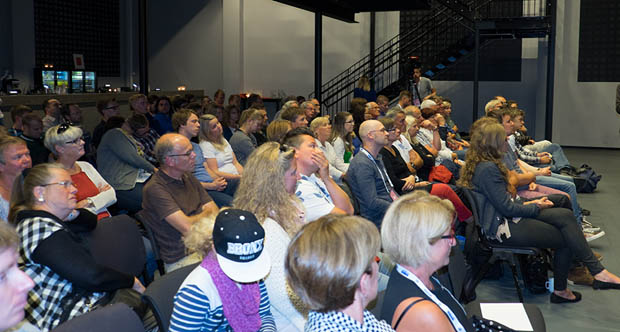 “I’m here to fight and I’m here to win! We must turn FIDE away from this vertical system where the federations are dependent on FIDE and move to a horizontal system where the federations are sharing and in control. My opponent’s slogan is “FIDE First” and to that I say federations first! I’m happy the election is here in Norway where your strong democratic traditions will inspire us. The chess world needs unity and democracy and my team and I are going to provide it.” 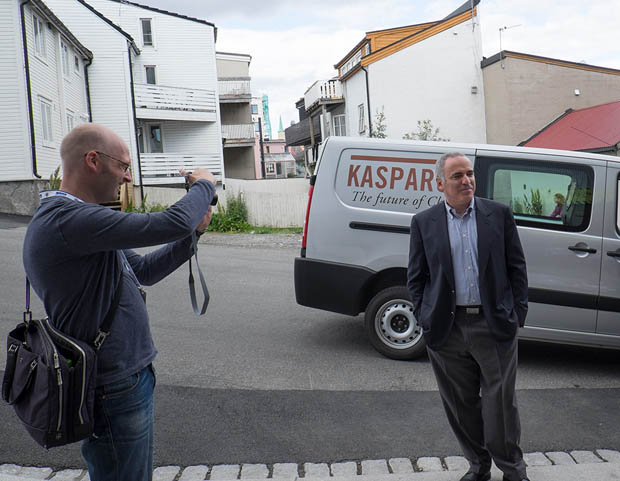 A photo for a journalist after the DRIL lecture, in front of a “Garrymobile”. But as usual, Kasparov preferred to walk, which is easily done to just about any destination here in Tromsø.

Team Kasparov is taking over Tromso! Thanks for the photo, @SusanPolgar: pic.twitter.com/Ywu4cWoDAS

The spectacular opening ceremony was about all the amazing teams and players here, not politics, but you can stop chess players from being chess fans when they see Garry Kasparov in person. After this admirable entry we decided to launch a Kasparov selfie contest here in Tromsø. The good news is that it doesn’t have to be a selfie with Garry himself like this one!

@abidraja is definitely our first winner of a book autographed by Garry, who will have several public signings here.

Any photo of you in Tromsø at the Kasparov booth, or with one of our posters, banners, or even campaign staff with hashtag #KasparovSelfie on Twitter or Instagram will count as an entry. The more photos you take the more chances you have to win! Extra points for creativity and number of people in the photo. Prizes include signed Kasparov books and even new tablet computers. Check the campaign Facebook, Twitter, and Instagram to participate with hashtag ‘KasparovSelfie’ and follow along if you’re not lucky enough to be here!