Garry Kasparov speaks at the launch event for his campaign for FIDE president in Tallinn, Estonia. He then introduces members of his ticket to speak to the audience, Belgian businessman Jan Callewaert and South African organizer and policy expert Afrika Msimang. A transcript of Garry’s presentation is below the video. Additional transcripts will be added later. The MCs of the event, at the start of the video, are well-known Estonian entertainers Hanna-Liina Võsa and Mart Mikk. They were fantastic!

Good evening. Welcome. Thank you very much for joining me, my team, and my colleagues at this very important day.

I have a lot to say but let me address some of the obvious questions many of you are asking.  What are our goals? What are our intentions? Why make such a difficult decision to move back into the world of chess? But this time not just to make chess moves, though I still remember how to move the pieces, but to do something else: To elevate our game back to the very high level in the public mind where I believe it belongs.

I’ve been thinking a lot and I’ve been traveling for the past two years around the world. And I just recognized that chess has not lost its popularity. On the contrary, it has been extending its appeal to different groups. And just one slide, I often use it in my lectures that shows different groups that play chess. 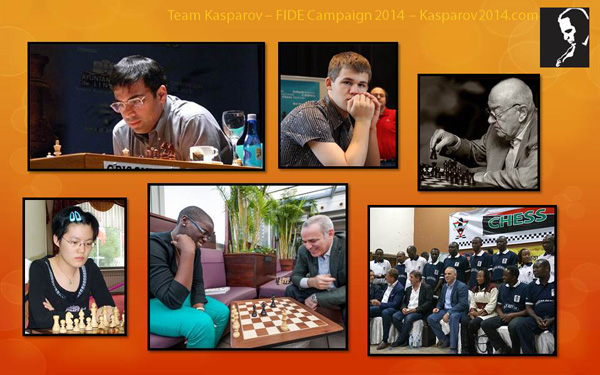 Of course we have two world champions Vishy Anand and Hou Yifan. We have Magnus Carlsen, who might become the youngest world champion. I say he might, because he might become a champion before he turns 23 at the end of November, and follow in my footsteps.

Victor Korchnoi is still playing chess and reminds me that I am young at the age 50. And other pictures, these are my new friends from African continent. A girl from Uganda, Phiona Mutesi, we actually met in New York and she has an amazing story to tell about how chess helped her to get out of poverty to prominence. And pictures of our friends form Nairobi, Kenya.

Going around the world I could see that something is fundamentally wrong. Because we can see the popularity of the game, we could see that people like the game, and moreover, if we look to the fictional world, to the virtual reality, chess is extremely popular. Take Harry Potter, for example. 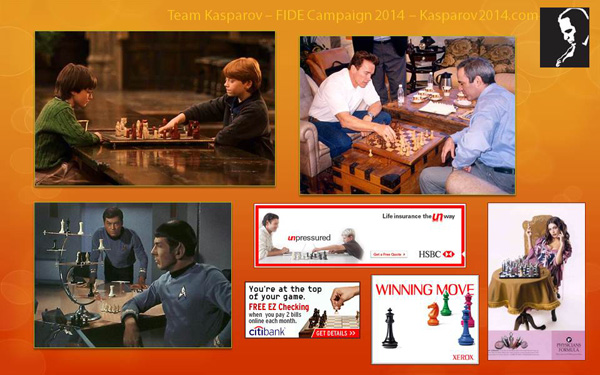 Every time an author of a book or the producer of a movie wants to show intellect, they use chess pieces. Chess is an ultimate sign of intellect. And, it goes without saying, in every language. You can see even the aliens play chess. And even the Terminator. I was impressed, and it was long time ago, ten years ago, before Arnold Schwarzenegger became governor of California, that he had a mandatory rule for all the kids in his household to learn how to play chess.

And you can look at these selected advertisements, and I am sure in your countries you can see many more with chess pieces, chess images everywhere, because for advertising industry chess is a natural sign to pretend or to demonstrate that they sell or promote an intelligent product. 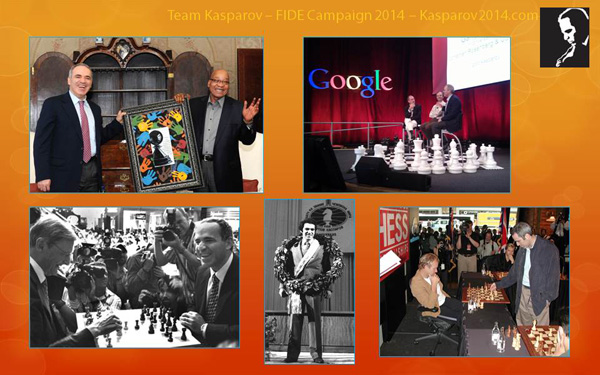 The president of South Africa, Jacob Zuma at a reception. We can see chess all around. So why are we still struggling? Why, with such a popularity of the game of chess, we are literally sliding down the road? So, what’s wrong?

I believe that we have to find the right interface between our great game (you may call it ‘the product’) and the rest of the world. How to bring them together? And the answer is, we have to create an interface. And this interface, of course is our federation, the International Chess Federation (FIDE) that should do a much better job by bringing these worlds together.

I feel that I can do. And I’ve been working a lot, talking to different people, and I am proud to say that I could bring together an outstanding team that could realize this dream. In no particular order, just to give you the names, that you can see the pictures on the screen:

Jan Callewaert, a prominent Belgian businessman, with an outstanding record of creating and building up companies, who has been helping me in creating Kasparov Chess Foundation Europe.

Afrika Msimang, from South Africa, she has an outstanding record of helping chess to be promoted in her own country and helping me to push this game to the rest of the continent. And she is also the president of Kasparov Chess Foundation Africa.

Rex Sinquefield, I think many of you who follow the game know this is probably the most generous contributor to the game of chess in modern days. The man who elevated US chess and willing to do more to make the game of chess really part of modern culture and modern society.

My great friend from Abu Dhabi, Sheikh Mohammed bin Ahmed Al Hamed, who has been one of the greatest devotees of the game of chess I’ve ever seen. He definitely plays chess much more than I could ever imagine! And he is also willing to help, because he also wants to see chess to become part of modern society and modern culture and wants to bring it back to its great level where it once was and where it should return.

And of course you all know Ignatius Leong, who has been tirelessly working in FIDE by promoting the game and organizing.

And I think together we can create, you may call it a dream team, to make sure that dreams can be realized. And it’s not just for us to do it. And I am grateful for other people who helped me and who have been working with me.

Morten Sand from Norway, who helped me from the very beginning of the campaign with his most precious advice. Robert Fontaine from France, who has been putting together a lot of logistics. My friends from other federations, namely starting with my friends from Croatia, who have been supporting me and I am here as the delegate from Croatia at this Congress. And again I apologize from not mentioning everybody, my friends from Africa, from other continents, people who have been pushing me to make this decision. They wanted me to move forward and to start this campaign.

Because at the end of the end day it’s about you. Because we can only change things if we work in concert, if we work together. And I am very happy to move forward following your advice. That is why you can always reach me at [email protected] I’ll be most happy to hear what you think should be done. Because the future of FIDE is not the traditional vertical system, where you are waiting for some recommendations or orders coming from the center. It’s about all of us working on different continents, different regions, different countries and different cities and every day making chess more and more popular.

FIDE, in my dream, is the giant “social network” that will create communication for millions and millions of chess fans. And then we can demonstrate that we are not just one of the largest sport federations in the world, with 178 countries, and 3 more joining now. We are probably one of if not the largest federations counting active participants, people who are eager to play chess, people who are loyal members of this giant chess club. So now, these dreams will be realized. Thank you for coming and welcome to the future.

Garry Kasparov and ticket members Ignatius Leong of Singapore and Rex Sinquefield of USA (by video) speak. Then the Estonian Defense Minister, Urmas Reinsalu, welcomes Garry and speaks about chess in schools. We thank Mr. Reinsalu and the President for their support.

More videos are coming soon. A photo gallery of the launch event is here