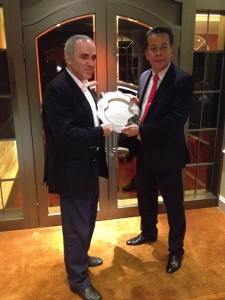 Kasparov and Leong Well Received in Macau and Hong Kong

Garry’s first campaign tour to Asia with Ignatius Leong continued in Macau and Hong Kong. Our great thanks to the organizers for their efforts and to Jose Silveirinha and Jackson Li for their reports. Earlier reports from the trip are here and here. An additional report on his visit to the Philippines is forthcoming.

President of ASEAN Chess Confederation Ignatius Leong visited Macau in September to explore the possibility of Macau hosting next year’s ASEAN+ Age-Group Championships. I arranged a meeting with the Macau Sports Department where we had a cordial meeting with its President, Mr Jose Tavares. Mr Taveres and Ignatius are old “friends” having first met in 2006 regarding the preparations for the Asian Indoor Games for 2007. At some point, I asked Mr Tavares how we could introduce Chess into the Schools. Mr Tavares said that all we needed was to bring one distinguished personality and meetings can be arranged more easily. When I persistently asked him, he named “Garry Kasparov”! But what stunned us all was the instantaneous response from Ignatius – “I will bring Kasparov to Macau on 20th November”. And they agreed on the date! 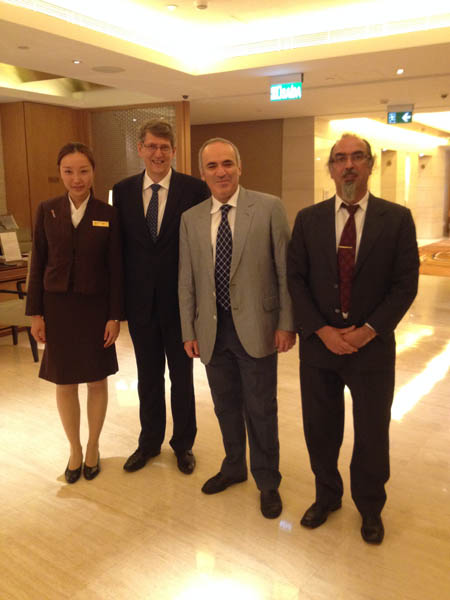 Kasparov received at the Hotel by President Jose Silveirinha, standing to GK’s left.

The legend and Ignatius arrived on 20th November from a flight from Manila. I met them outside the plane and in less than 3 hours, we were at the Department of Education. The Go and Xiangqi (Chinese Chess) associations were also invited to attend the meeting to hear from the Legend on how to introduce Chess in Education. The meeting was co-chaired by Mr Tavares and Mdm Leong Lai, Director of Education Department. Representatives from the departments of Education and Sports were also present.

Kasparov made his presentation and on why he wants to promote chess education to Macau youth during his short tour. He stressed that the size of a nation or population is not important. Moreover, introducing Chess in Education is not to produce top players, but a nation of good citizens who can think for the future. At the end of the session, Mdm Leong invited the Macau Chess Association to put up its plan. She also extended the invitation to Go and Xiangqi. Kasparov concluded that all forms of mindsports are related, co-exist and learn from one another. 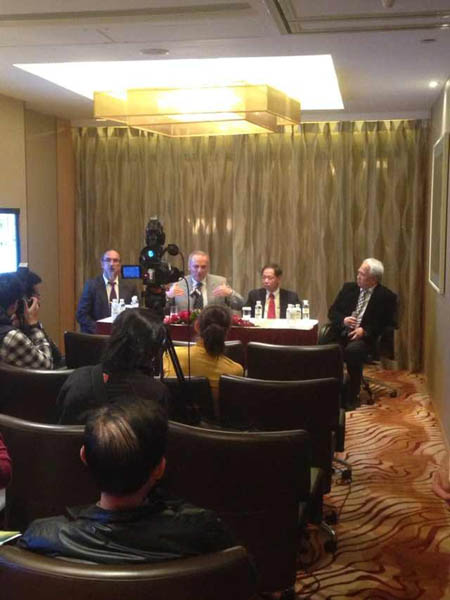 The meeting was followed by a Press Conference at the Hotel Okura. TV stations and journalists from three languages (Portuguese, Cantonese and English) were present. There was a lot of interest on the topic of introducing Chess in Education. After, 90 minutes, we attended a dinner hosted by Mr Tavares.

The key representatives from departments of Sports and Education and the 3 mindsports associations were invited for the dinner where Mr Tavares introduced Mr Raymond Cheung. Raymond is a tycoon with diversified businesses and will succeed me next year – having served as President of the Macau Chess Association for nearly 20 years. Mr Tavares offered to provide from the Sports Department, seed money of USD 400,000 for the next 3 years to the Macau Chess Association to run a chess academy in parallel to the introduction for Chess in Education. However, if more funding is required, then the association has to make an application. I was obviously surprised with the offer and turned to Garry and Ignatius to lend their expert advice and support. 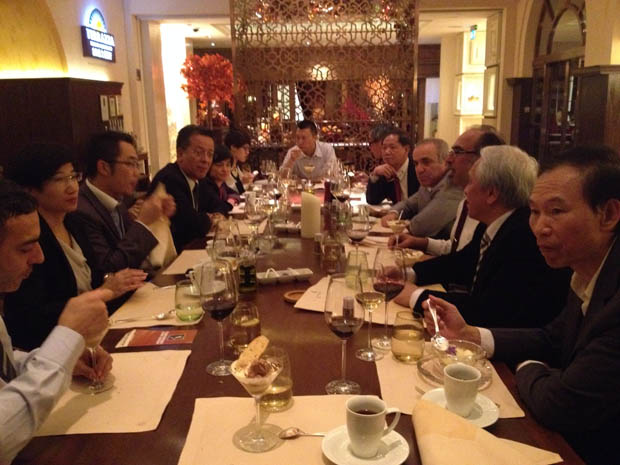 Dinner with senior officials from the departments of Sports and Education as well as representatives from other mindsports – Go and Xiangqi. 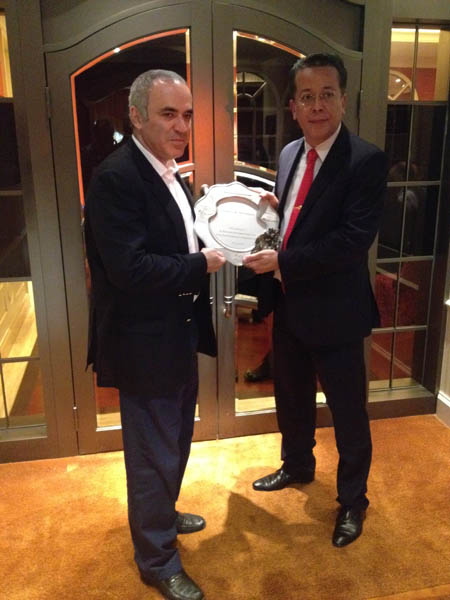 The visit of Kasparov opened new doors. It was like a Cinderella story. And it all began 2 months ago from a visit of my old friend Ignatius. I am of course very happy. But at the same time, even when the light begins to shine, I feel that this has been a long time since I headed the Chess Association. I believe that 18 years are more than enough and “renovation” is necessary and should be done just as in any organization. Nevertheless, I will still work with whoever will lead the Macau Chess Association and journey with them on the route to Chess in Education. 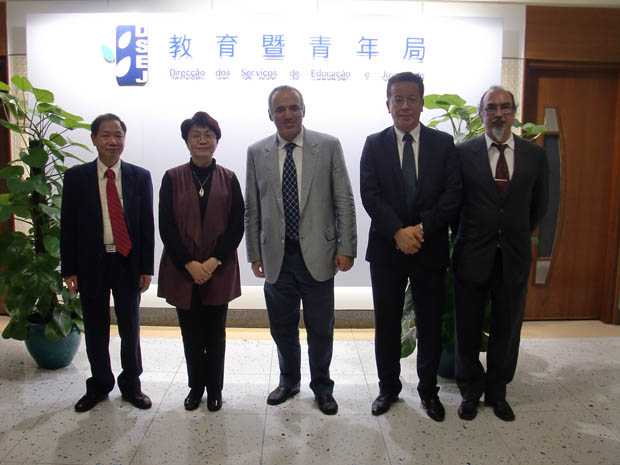 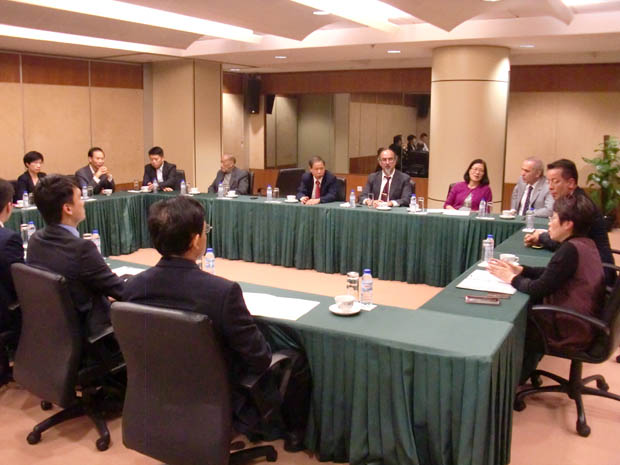 1321: Representatives from the Education Department, Sports Department and the associations for Chess, Go and Xiangqi. 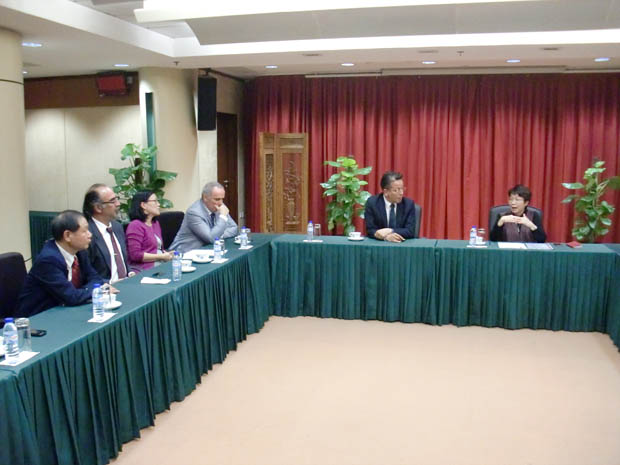 1317: Mr Jose Tavares, President of the Macau Sports Department and Mdm Leong Lai, Director of the Education Department, chairing the meeting of the mindsports associations of Chess, Go and Xiangqi. 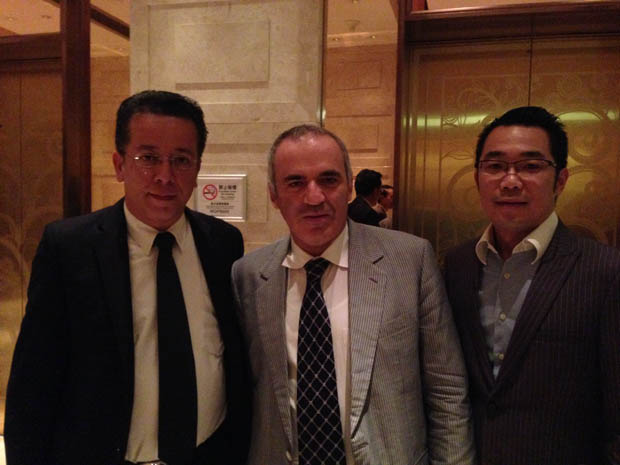 Macau 01: Mr Jose Tavares, Kasparov and Mr Raymond Cheung, a young tycoon with diversified businesses and being groomed by the authorities to lead the Macau Chess Association next year.

I and my friends were thrilled when told by an old friend of 30 years, Ignatius Leong, that Kasparov will visit us, here in Hong Kong, even if it was only for 6 hours!

On 21st November, our Delegate KK Chan escorted the King, Garry Kasparov, and Ignatius Leong, by ferry from Macau to Hong Kong. They were met and were brought to a high society club for a short rest before meeting my fellow board members on the Hong Kong Chess Federation. At the club, a chess dad, Mr KL Au, a CEO of a subsidiary of the Bank of China, played host. When it was time for dinner, instead of taking the transport, the King preferred to travel by foot – for about 20 minutes – in busy Wanchai District.

At dinner, the King was talking and following the critical Anand v Carlsen game more than he was eating. In between, he would suggest moves which were eventually played out by either side! He did not lobby for his elections! He was straight on to Chess in Education and on how small nations like Hong Kong can also play a role in the global world. The opportunity to dine, talk and hear him in person – wow – who else can be a better Ambassador for the Chess World! We drew inspiration from his visit and have been assured that he will visit us again in his Thankgiving Tour!

Garry, you have our Support! 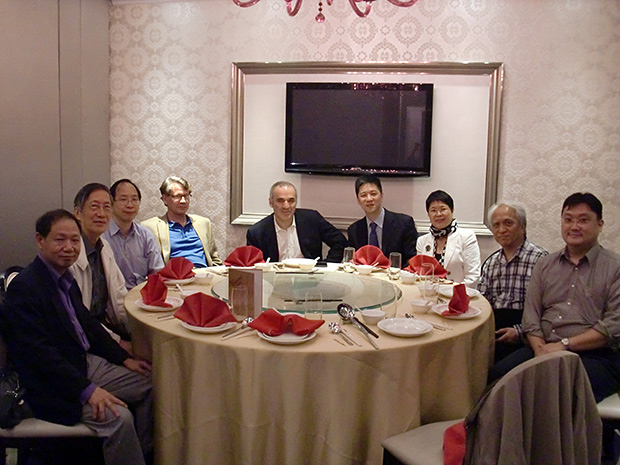