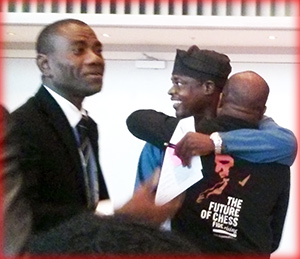 African Chess Confederation meeting ends in a big win for Kasparov supporters and for justice! The challenger will gain several votes while incumbent will lose several and momentum swings toward Kasparov in Monday’s election.

In an amazing turn the day before the election for FIDE president in Tromsø, the African Chess Confederation delivered a huge boost to challenger Garry Kasparov’s chances of unseating Kirsan Ilyumzhinov.

A marathon meeting on Sunday saw a battle between the supporters of the two candidates over the legal status of the votes of five African federations.

The incumbent Ilyumzhinov has repeatedly abused the powers of the FIDE office to deny voting status to federations that supported Kasparov, and, in the case of Gabon, illegally replaced the legitimate president despite every kind of supporting evidence. The Ilyumzhinov campaign has also heavily abused the proxy system in many ways, and these illegal actions were challenged at the ACC meeting.

But numbers and democracy were on the Kasparov team’s side at the ACC General Assembly, so Ilyumzhinov’s supporters tried everything possible to disrupt or delay the result. They failed. 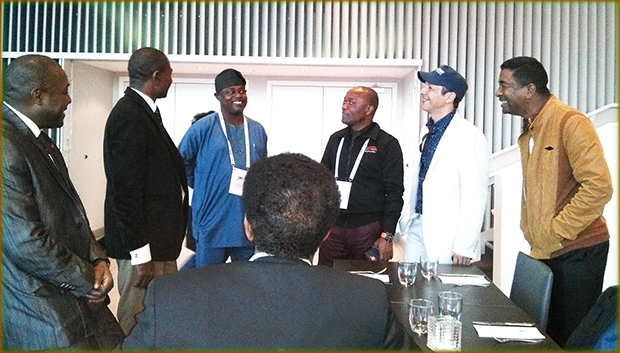 A celebratory mood for Team Africa after their great triumph at the meeting.

The end result was a clean sweep for Kasparov’s Africa supporters! Tanzania and Burkina Faso were recognized as voting federations, as was the legitimate representative of Gabon. The Mali and Mauritania proxies were invalidated, costing Ilyumzhinov two of his many illegally handled proxy votes.

As Kasparov has said all along, Africa is leading the way for change and now proves the difference in this election. They blocked Ilyumzhinov’s dirty tricks and provided a decisive swing in votes and momentum.

The meeting itself was dramatic every step of the way and showed that Ilyumzhinov’s allies would try every possible trick. Several times they tried to break up or postpone the Assembly and once they invited Ilyumzhinov’s lawyers into the room to attempt to influence the delegates. Then, when a show of hands vote on the first item on the agenda showed Kasparov’s supporters had the advantage in the room, Algerian delegate Lakhdar Mazouz, ACC president and close ally of Ilyumzhinov, said the vote did not count and attempted to disrupt and delay the meeting! (Mazouz was recused from chairing the meeting since he held the two reassigned proxies.)

Kasparov’s supporters insisted that any such postponement must be voted on and Mazouz then threatened to walk out if such a vote were taken! This last desperate gambit was refuted by the African delegates who have fought so hard for change over the long months of this campaign. They insisted on a vote and Mazouz indeed walked out, taking many of his allies with him. Since the meeting was already in progress, this final attempt to avoid defeat failed. A new committee panel was formed and votes were taken on the items on the agenda as planned.

This result is a victory not only for Kasparov, who will now gain tremendous momentum headed into tomorrow’s election, but also for justice and for chess in Africa.

Legitimate federations will count and two of Ilyumzhinov’s illegitimate proxies have been invalidated. Côte d’Ivoire federation president Essis Essoh said that this would have a big impact on Monday’s presidential election, as now more African delegates and those from other continents see the momentum for Kasparov and for change is real.

Thank you, Africa! On to victory!