Home > Campaign trail > Garry Kasparov on the Threat to Tromsø 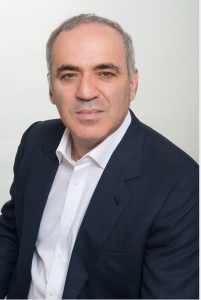 Garry Kasparov on the Threat to Tromsø

[ Garry was asked by ChessBase for a response FIDE VP Israel Gelfer’s comments regarding the Tromso Olympiad organizers’ statement confirming that teams that missed the June 1 team list registration deadline would not be allowed to participate. The list of excluded teams included the two-time Olympic champion Russian women’s team, as the Russian Chess Federation failed to submit the list of players before the June 1 deadline. More background and info here and here. Garry has slightly expanded his original statement to ChessBase below with additional comments more appropriate for the campaign site. ]

Why must it be that chess players always suffer for the errors and arrogance of officials and bureaucrats? It is a shame for any team to miss out on the Olympiad for technical reasons out of the players’ control. I am a candidate to be a president of FIDE who represents all the federations, not only potential medal winners from powerful federations. But of course the Russian women’s team is not just any team. The Olympic champions! So of course all the attention is on their exclusion, because it is a tragedy not only for the players, but also for the organizers and the fans.

Of course I want the Russian women to play. I want all the teams to play, like any fan. But as a candidate for the FIDE presidency I have more responsibilities than as a fan.

I cannot explain the bizarre statements of FIDE vice-president Israel Gelfer. What would I or the Norwegian organizers have to gain from excluding the celebrated Russian women’s team? And he wants to cancel the Olympiad in retaliation? Punish 175 teams for the mistakes of one? Such absurd arrogance! This matter does not involve me or my campaign for FIDE president. This is a transparent attempt to look for excuses and scapegoats for a self-inflicted disaster. The Russian Federation’s statement doesn’t address the obvious question of why they didn’t submit their women’s team on time, as they did with the men’s team. It’s obvious they were waiting for Lagno’s transfer to strengthen their team and intentionally allowed the registration deadline to pass to do so. Would permitting this devious maneuver be fair to all the other teams that followed the rules and registered on time?

I’m sure the Russian Federation believed, and had been told, that FIDE would let them violate the rules and receive an exception. As the Norwegians’ open letter to Freeman attests, FIDE tried this by citing the President’s “nuclear option” of statute 6.1, the magic rule that says no other rules matter and that the President can do whatever he wishes, regardless of contracts or partnerships. (For me this brings back sour memories of 1985, when FIDE president Florencio Campomanes used the equivalent rule 6.11 to terminate my first world championship match with Karpov.)

The Russian Federation is neither ignorant nor innocent in this case.

That’s the real danger here, the real threat to the global chess community. Either we have rules and accountability and professionalism or we do not. Either we have consistency and transparency or we have instability and prejudice. I have often criticized the FIDE “zero tolerance” rule that forfeits a player for even a moment’s delay in reaching the board. But allowing for common sense and dignity is not the same as intentionally violating the rules. The Russian Federation is neither ignorant nor innocent in this case. The have sacrificed their players by seeking unfair advantage and FIDE attempted to bully the Norwegian organizers into allowing it.

I have nothing but sympathy for all of the players on all of the teams excluded due to the incompetence or misconduct of their federations. All lovers of chess share their disappointment and outrage. It is very tempting to chant “Let them play!” at the organizers, deadlines and regulations be damned. It is correct to be outraged! But we must focus our frustration on those who break the rules, not on those who respect them.

[ Additional comments, July 17 2014 ] Now that a day has gone by since the organizers’ announcement, the battle lines are clearly drawn, and as predicted. Kirsan’s FIDE promotes the interests of the Russian Chess Federation and attacks the Norwegian organizers it has officially partnered with to run the Olympiad. What of the Senegalese team, excluded thanks to the interference of an illegal delegate? What of Oman, a brand new federation that was very excited to send its first team but could not get organized in time to make the same deadline that the Russian Federation breached intentionally?

FIDE’s role should be to work with the organizers to make sure every federation is properly informed every step of the way and given assistance when needed.

I find myself in the strange position of a multiple Olympic champion for Russia and the USSR defending equality before the rules, rules that are applied without publicity to smaller federations that don’t have such a close relationship with Ilyumzhinov’s FIDE. And FIDE, which is supposed to represent all the federations, is supporting one large federation’s attempt to gain unfair advantage for its team. Of course I want the Russian women to play! I want all the teams to play, like any fan. But as a candidate for the FIDE presidency I have more responsibilities than as a fan. The promise my team and I have made is to end the abuse and favoritism in FIDE that led to this mess.

FIDE’s role should be to work with the organizers to make sure every federation is properly informed every step of the way and given assistance when needed, not to lobby on behalf of one powerful federation to break the rules. As in any relationship, good communication is the answer and it should be public and transparent. The public was surprised by the Norwegian announcement because the months of discussion among the organizers, the RCF, and FIDE took place in private channels with all of the misunderstandings and contradictions that occur.

As a postscript, that the FIDE regulations are only available in English is an issue my campaign platform has vowed to resolve immediately after we take office. Even the English regulations are vague and ambiguous to native speakers and lawyers! Professional revision and translation, along with service to help federations understand the rules, will help prevent such tragedies in the future.