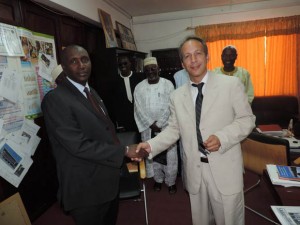 From the very beginning of his campaign for FIDE president, Garry Kasparov talked about promoting chess, not just running for office. The impact of his many visits around the world (now over 20 countries!) has been tremendous, making front-page news on three continents and putting the game of chess in the spotlight.

An even better result came in Gambia, where the Kasparov Chess Foundation sponsored an impressive chess championship! Mr. Larbi Houari was on the scene for us and Alieu M Sallah, Secretary General of the Gambian Chess Federation, prepared this excellent report. Africa Rising!!

IN HONOUR OF OUR 49TH NATIONAL DAY ANNIVERSARY CELEBRATION

HELD AT THE BADALA PARK HOTEL 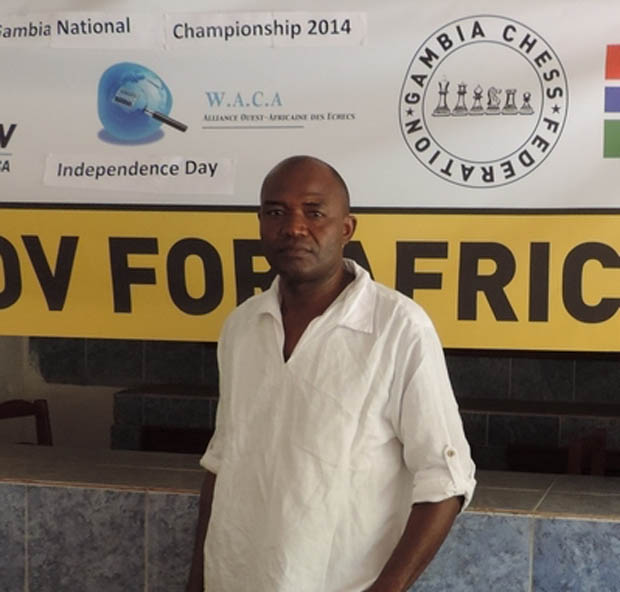 At that meeting Gambia Chess Federation (GCF) President Antouman Njie informed Mr. Garry Kasparov of GCF intention to organise our national chess championship which was slated to take place from the 21st to the 23rd February 2014 in honour of The Gambia 49th Independence Anniversary Celebration.

Instead Garry Kasparov proposed to him to make the tournament an International event where countries within the sub region can participate and he Garry Kasparov will sponsor it. Mr, Njie without hesitation agreed with him and was linked with Mr. Larbi Houari. 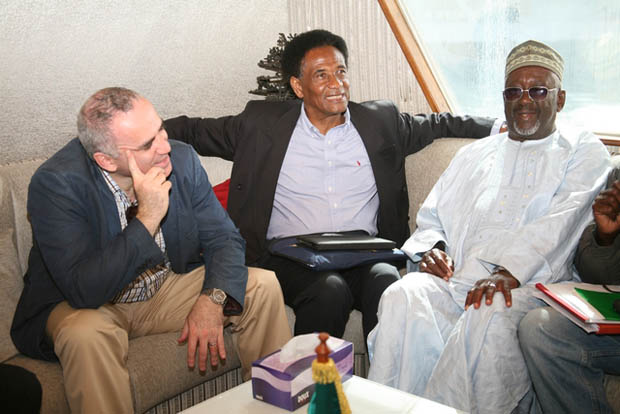 Mr. Larbi arrived in the Gambia on the 27rh February received by GCF President Antouman, and stayed at the tournament venue Badala Park Hotel. The same day around 6.00pm Mr. Larbi and GCF Committee members had a planning meeting. 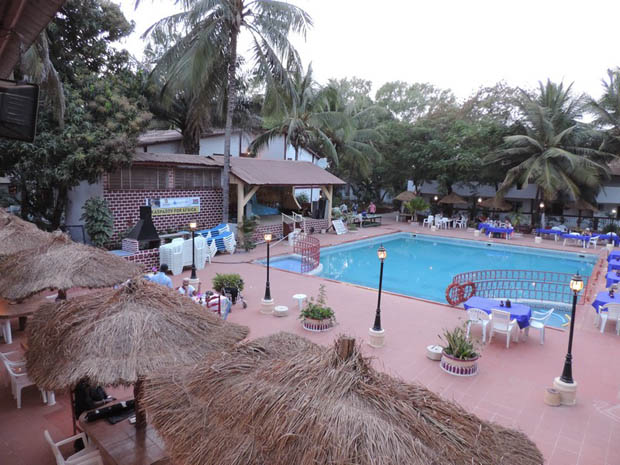 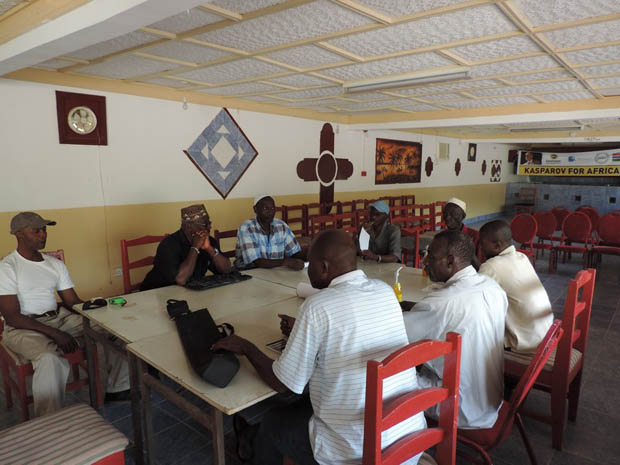 Meeting of the Gambia Chess Federation Board 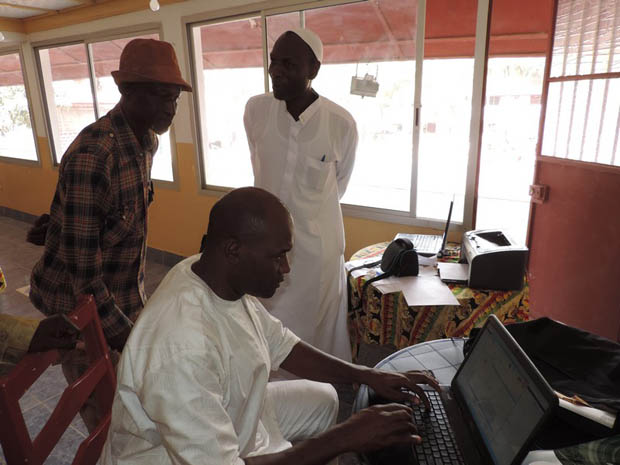 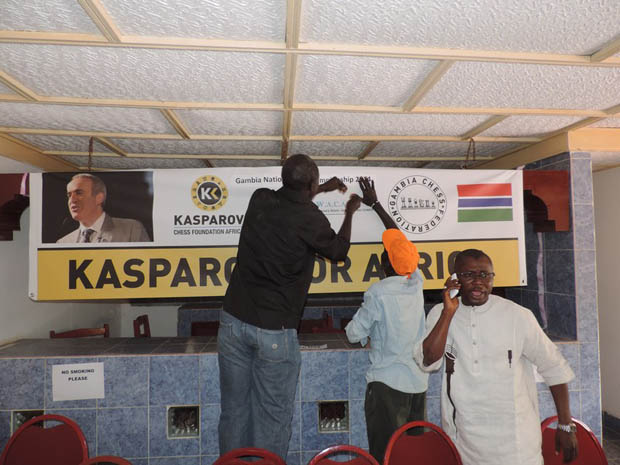 Preparation of the tournament 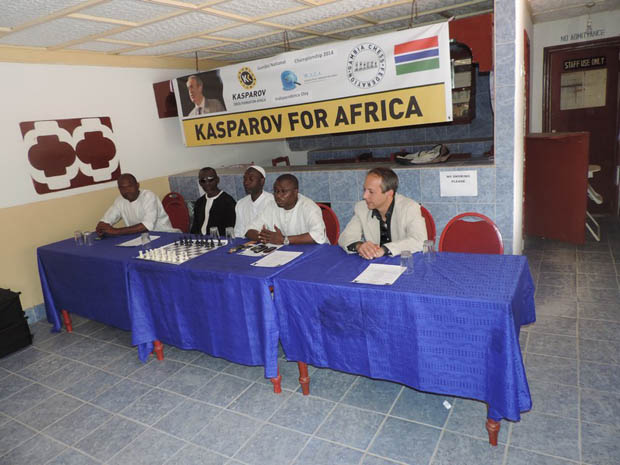 Titawo Mendy, Opening Remarks the Executive Director of National Sports Council thanked the Kasparov Chess Foundation (Africa) for sponsoring the tournament, attractive prizes and advised chess players to take the game very seriously because is their sport choice. He challenges the GCF to involve more youths. Finally thanked Larbi for his courage to come to the Gambia and declared the tournament open. 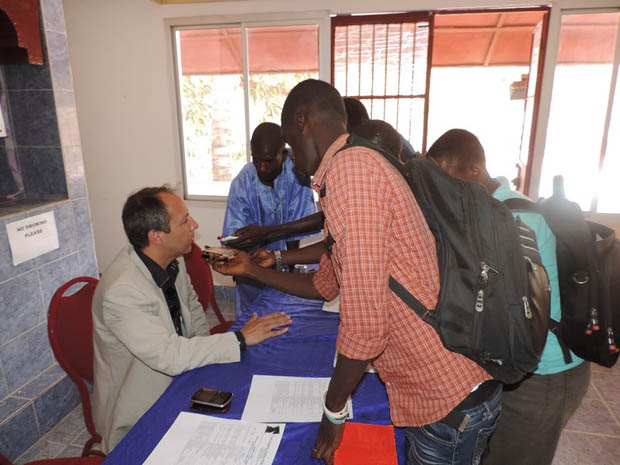 Larbi Houari answering questions to the national media of The Gambia.

A 24 players SWISS System tournament was held this was shortened to 5 rounds due to difficulties we faced on the first day and has coincided with other National event. The rate of play was all the moves in 50 minutes; add on 30 seconds per move of 5 rounds in 3 days.

The President Gambia National Olympic Committee, Alhagi Momodou M Dibba on Saturday 1st March 2014 pays a visit at the tournament venue and had a fruitful discussion with Larbi and GCF Committee Members. He called the Minister of Education for a meeting with KCF just after the tournament! 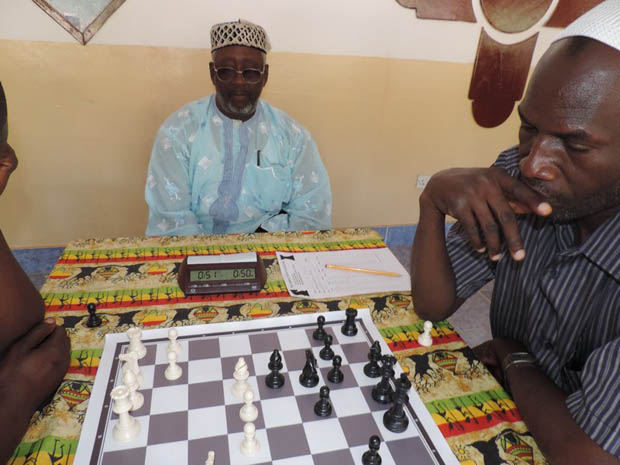 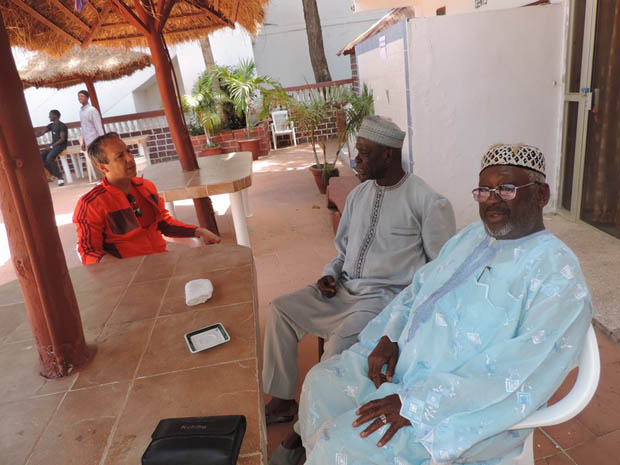 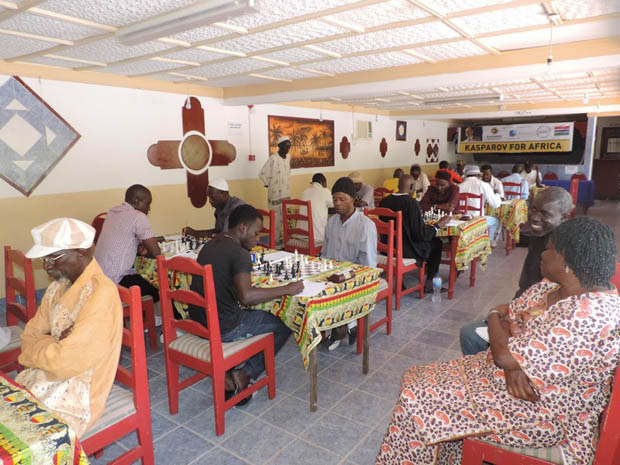 The fight is on!

The three days chess tournament was a renowned success as the GCF objectives was geared towards establishing long terms relationship between the Kasparov Chess Foundation and Gambia Chess Federation. 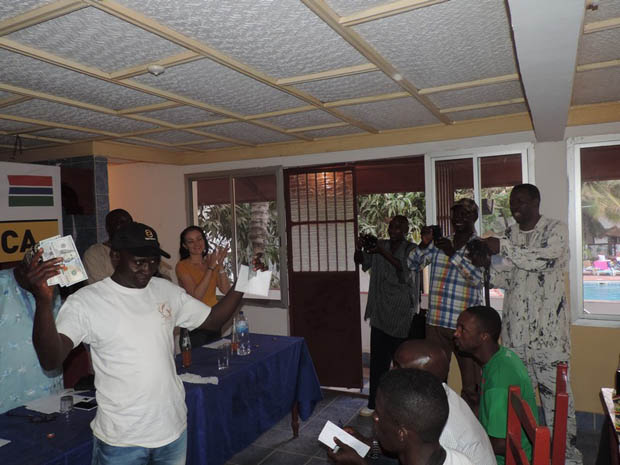 Larbi Houari said that he was very happy to be here, among you, proud to see so much enthusiasm. The tournament came to close as scheduled, and during the closing ceremony, the GCF,  had among its invited guests Mr. Osseh Sock (one time a chess player but due to his senior managerial responsibilities ) .  Since the advent of the Gambia Chess Federation, this is the very first time in history of Chess in the Gambia for Chess players to win such prizes. 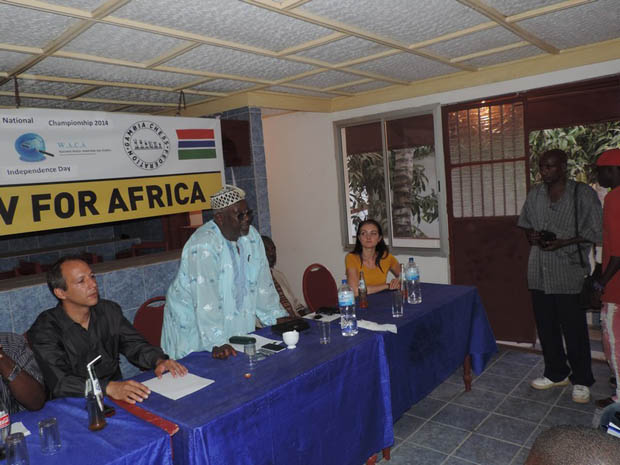 Closing ceremony. President Antouman Njie renews the promise of the board to support Garry Kasparov for the next FIDE elections.

On Monday 4th we had an appointment with the Minister of Basic and Secondary School, Hon. Fatou Lamin Faye, unfortunately she was busy on other official errants but asked us to meet his Permanent Secretary Baboucarr Boye. 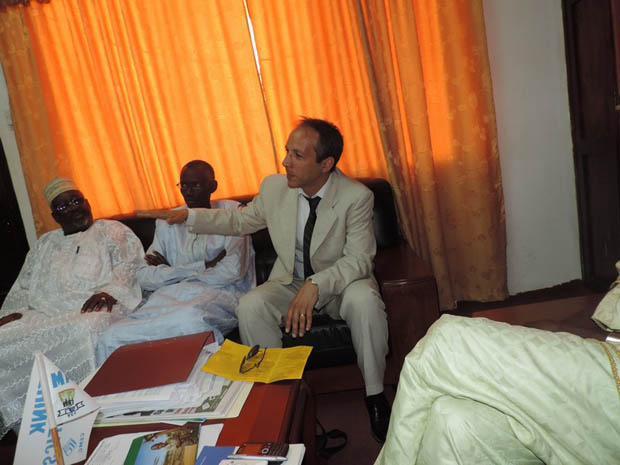 The meeting was attended by the Desk Officer for School Sport Musa Menday and his assistant Mr. Bah.

We were warmly received.  The main subject of the discussion was Chess in School Program and the benefits of chess as an educational tool, Mr. Baboucarr Boye being a mathematician feel touch by the words of Larbi that chess can improved student in their mathematics and further told him their are scientific proof.

The Permanent Secretary promised to support GCF as he had done before in other sports  In fact he assured us that he start a test in selected schools if the program starts and see the different. Larbi promised to provide him with copies of research done.

He further assured us that immediately the chess material arrived. next summer he personally with his technical team will select schools pilot project in the Gambia.

He thank Larbi and the Kasparov Chess Foundation for choosing Gambia.

Through Musa Mendy we received feedback from the Minister herself, according to him she appreciate the initiative and looking forward for the implementation process in September-October of this year. 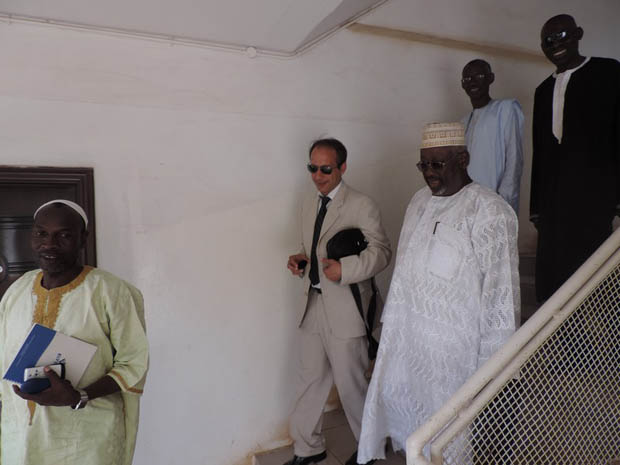 Everybody happy after this very constructive meeting! 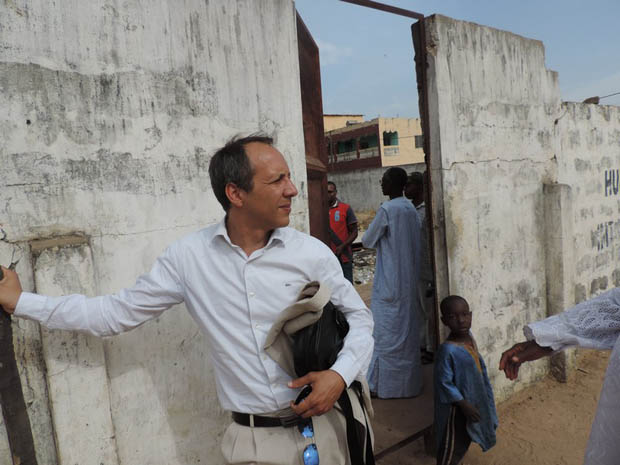 “Still a lot to do here, but as long as you have such an energy and faith, we’ll help you for a real independence day of your chess model (…)” Larbi visiting possible sites for a new office for the Gambian Chess Federation.

The Gambia Chess Federation is extremely proud in achieving some of its key objectives highlighted herein, which are very critical in our quest to rejuvenate and raise the profile of chess in the smiling coast of Africa ‘GAMBIA’.

The Gambia Chess Federation wishes to register our profound gratitude to the Kasparov Chess Foundation for single-handedly sponsoring this historic chess tournament. It is the first of its kind in the Gambia.