End of the Myth: Africa for Team Kasparov!

Since the beginning of this campaign, Team Kasparov has promoted a bright new future for FIDE based on sponsorship, education, and professionalism. We have a mission, we have funding, we have policy, and we have the right people to do the job. The Ilyumzhinov campaign message has also been very clear: “we are winning.” Along with personal attacks on our team members, they repeat this myth over and over, claiming bigger and more fantastic margins of victory every day. They say little about the last 19 years and even less about the next four.

The last myth is over. Our opponent’s campaign said Africa would quietly stay with the status quo. They were wrong. Below we publish 14 letters of endorsement for Kasparov, plus the five nominating nations that have all made clear their support. The current real numbers are 18 for Kasparov (plus Tanzania, which does not yet vote at this Congress), 14 for Ilyumzhinov, and five still undecided. Three more, Namibia, Zambia, and Botswana, nominated Ilyumzhinov but will all hold decisive votes in the coming days. We wish them courage!

Africa has been abandoned by FIDE for 19 years of broken promises and the chess community there is full of energy for positive change. We thank and applaud the federation leaders of Africa for their vision and bravery. They have exposed Ilyumzhinov’s last myth and many others will now follow their bold example. Africa Rising! FIDE Rising!

Our opponents rely on stories and nominations that do not represent official support. Team Kasparov provides real letters of endorsement and will continue to do so. We will publish similar reports from Asia, Europe, and the Americas in the coming weeks. We are clearly behind in the Americas, are narrowly winning in Asia, and widely winning in Europe. Now the myth is over and the fear will be over and more will come. It is time for change.

We are honest, it is a very close race. This is why the current FIDE administration is so aggressively attacking valid federations like Afghanistan, Gabon, and Papua New Guinea for supporting Team Kasparov. They know every vote is crucial and they want federations to be afraid. But we will fight for these federations and for all federations against these abuses. We will support them, defend their rights, and we will win. We will win in Tromsø on August 11.

Now is the time to join the movement for change, for transparency, for sponsorship and education in the chess world. The sun has risen in Africa and its light has exposed the truth. 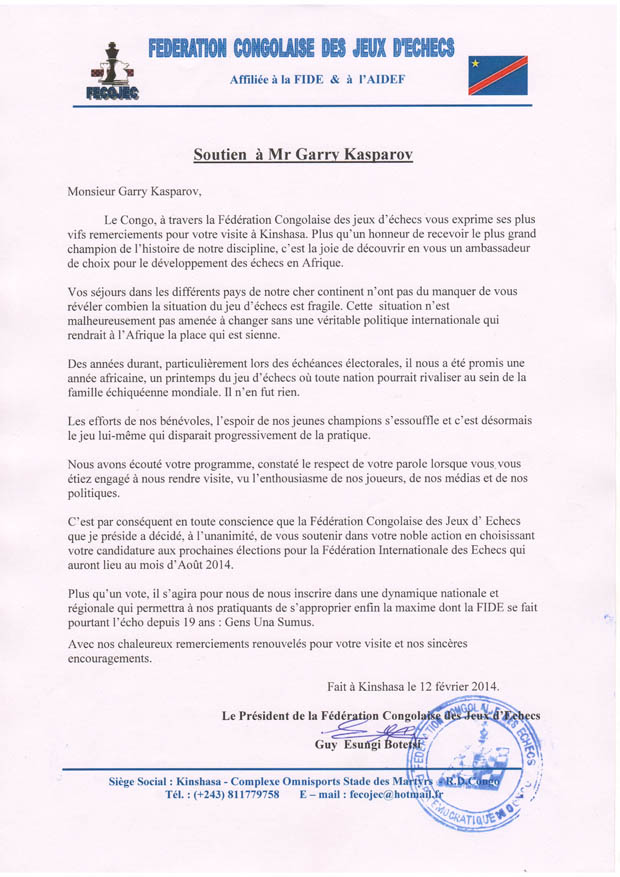 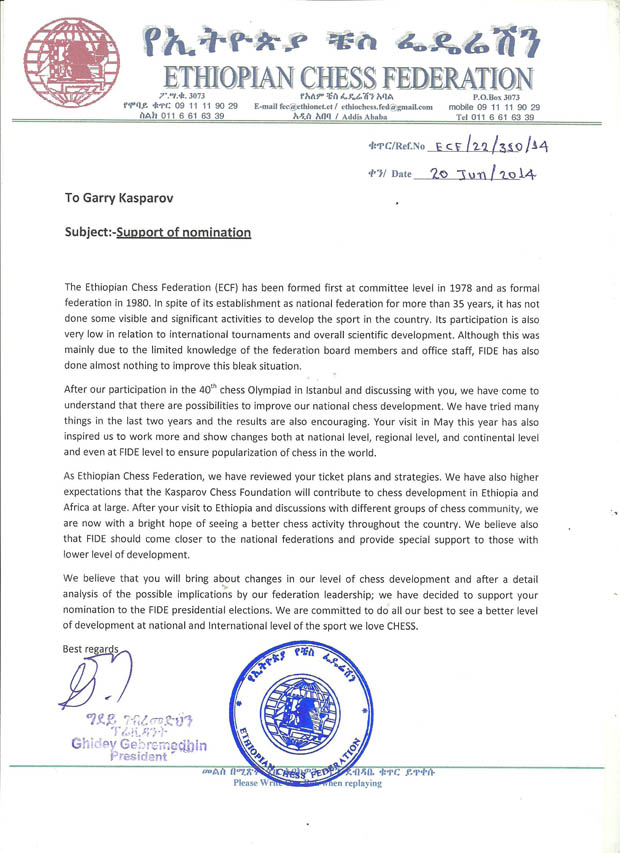 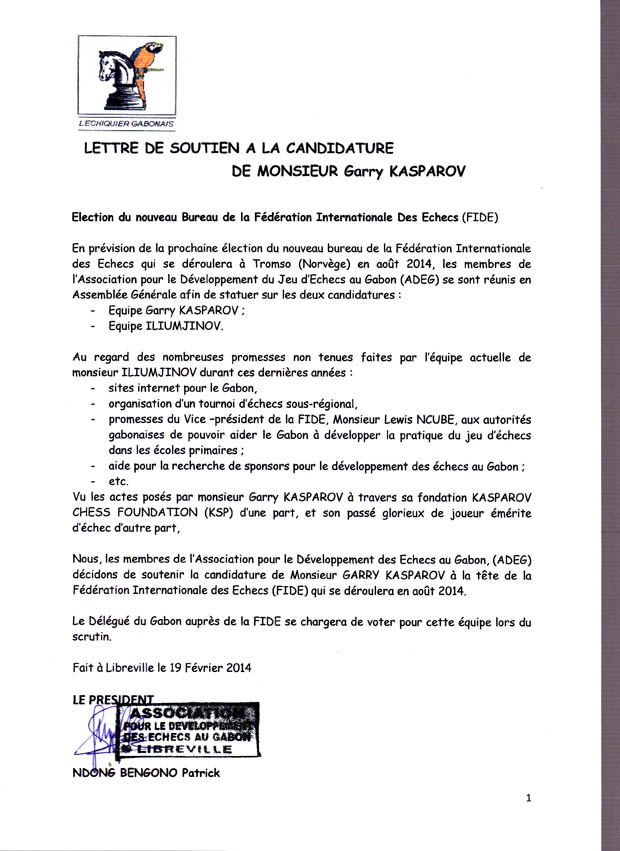 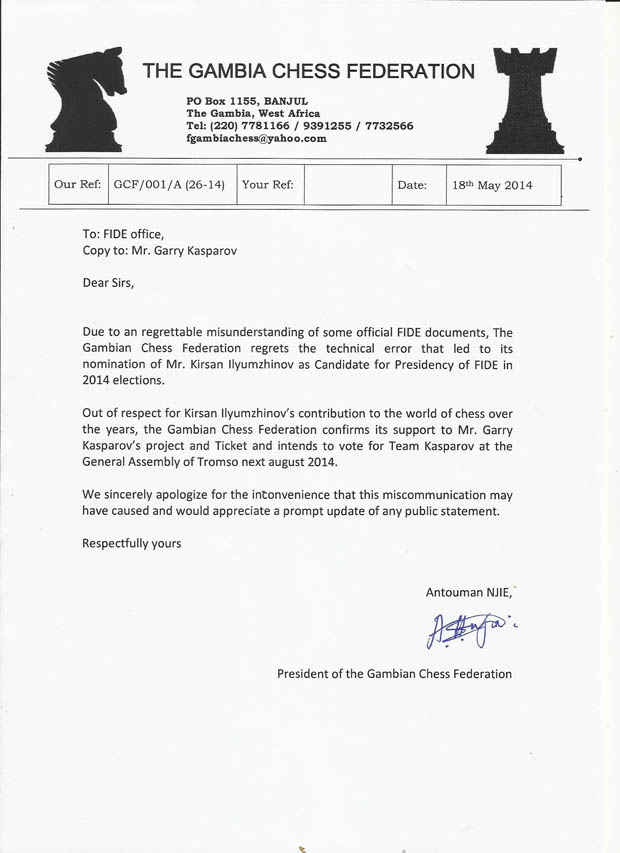 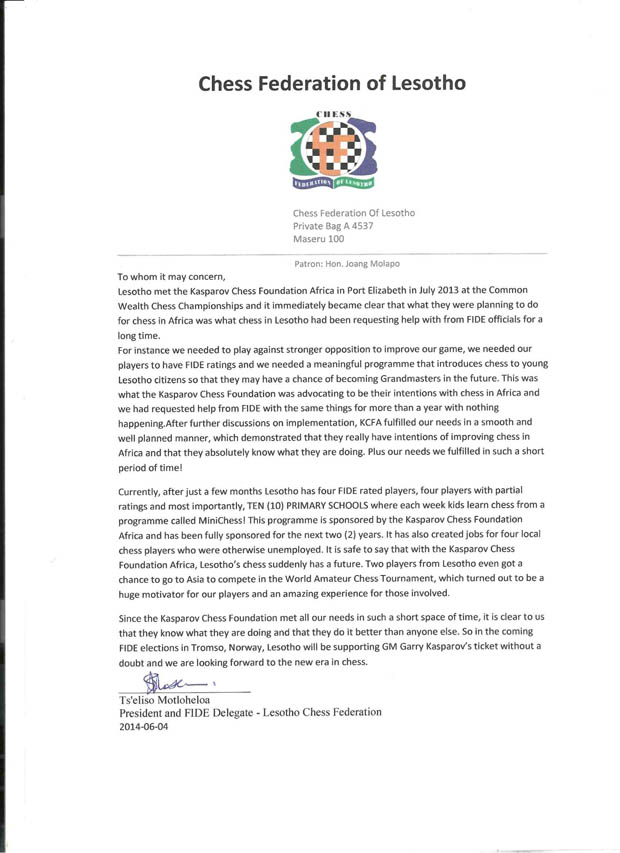 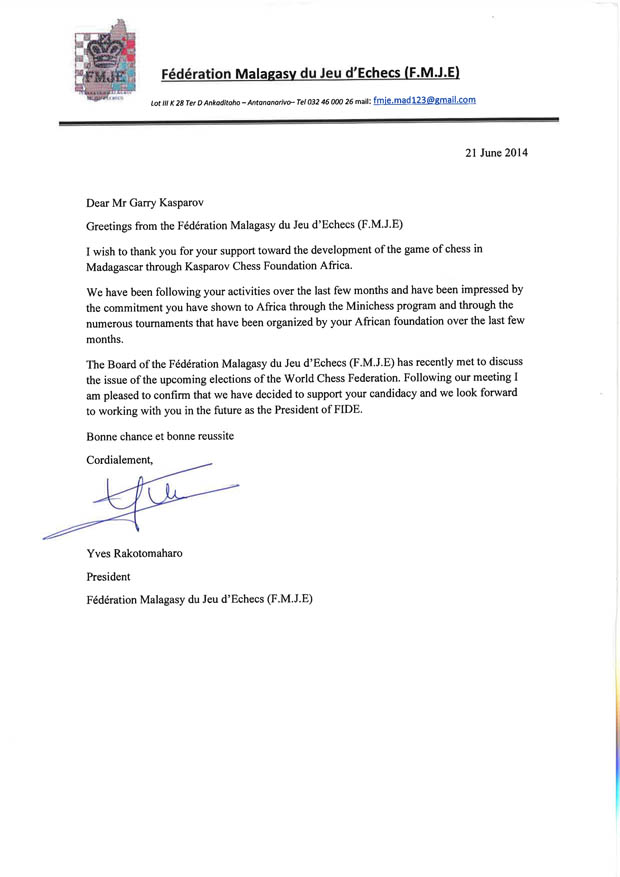 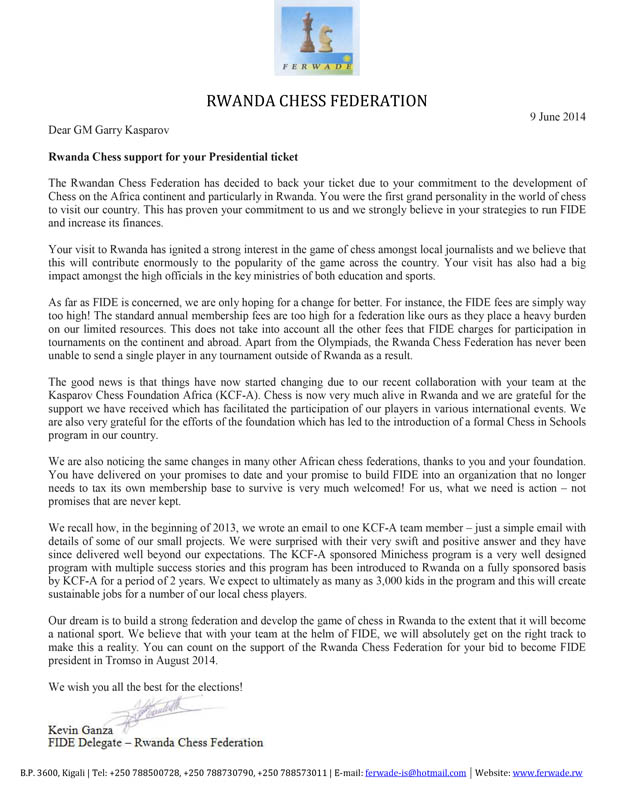 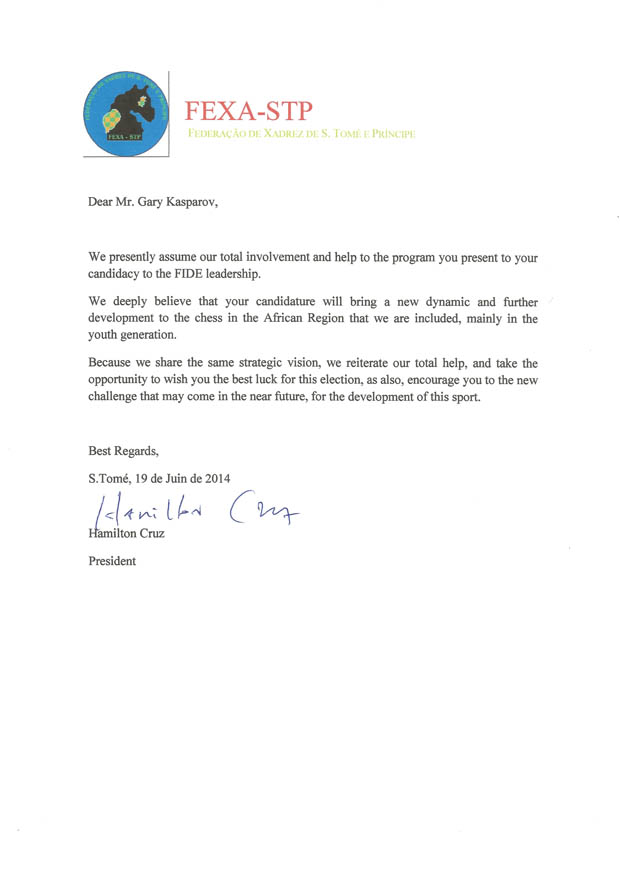 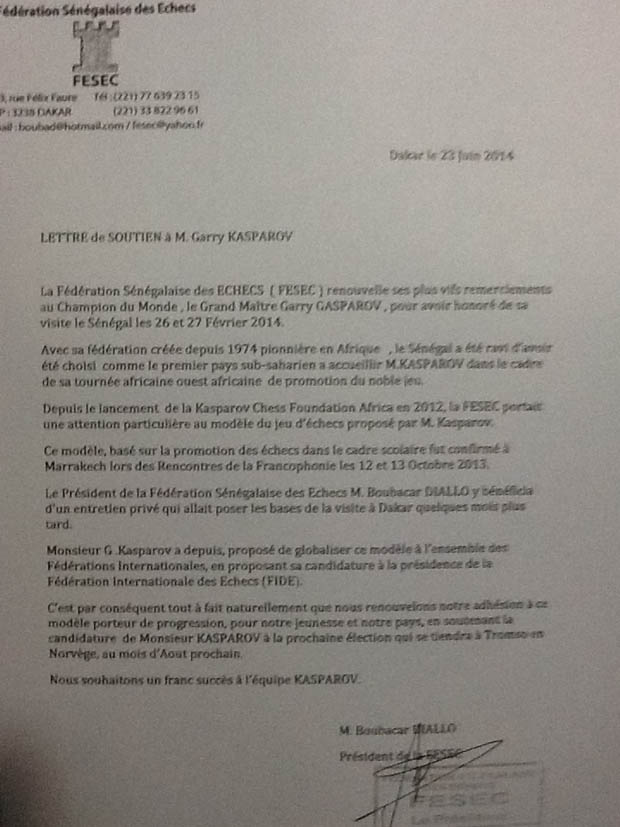 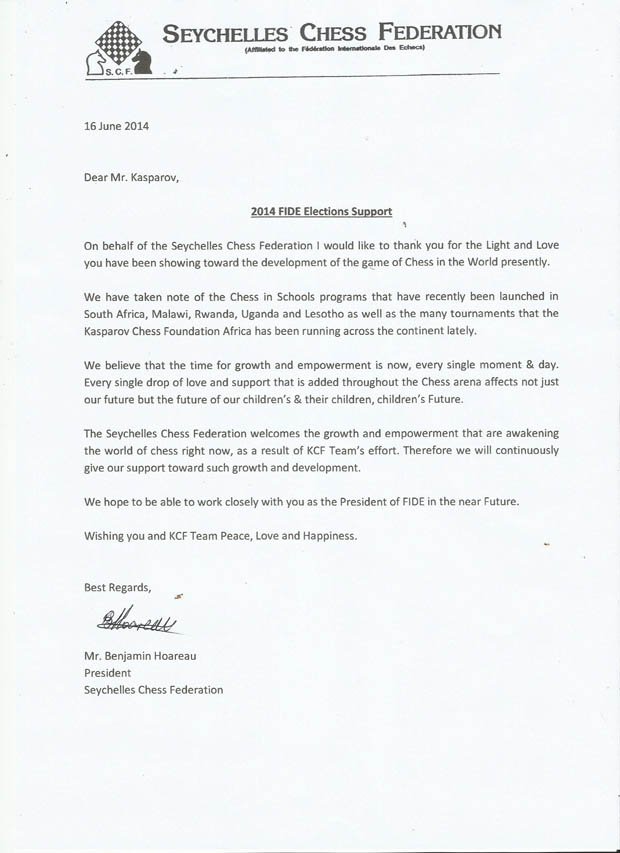 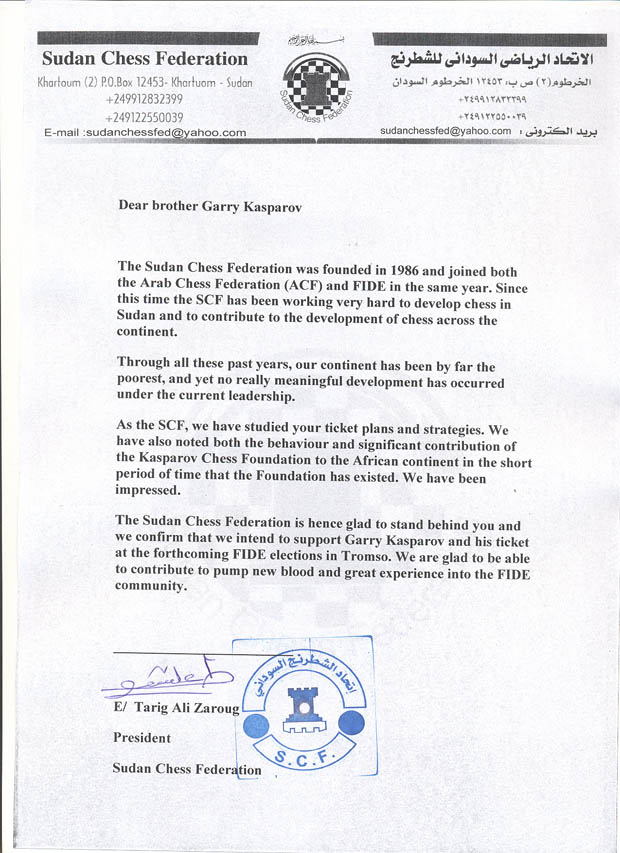 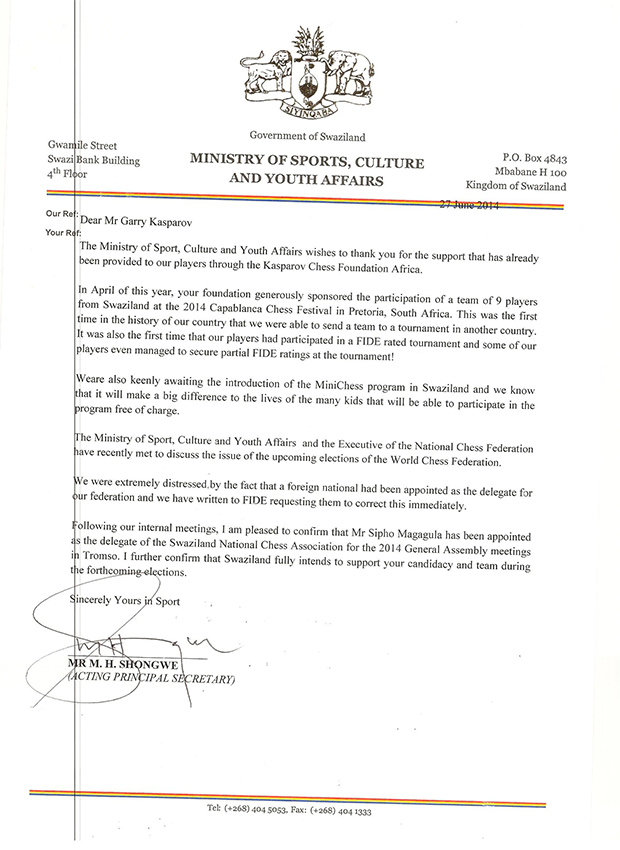 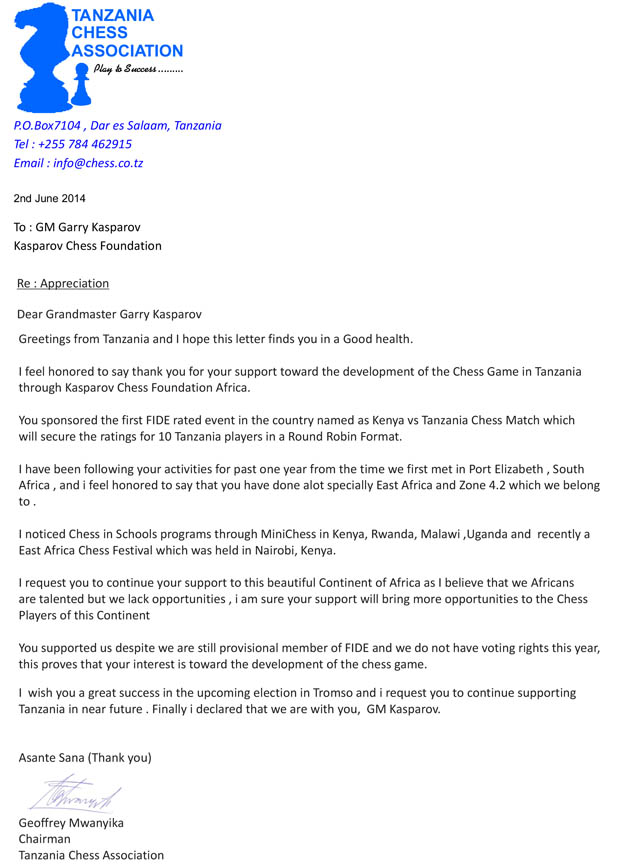 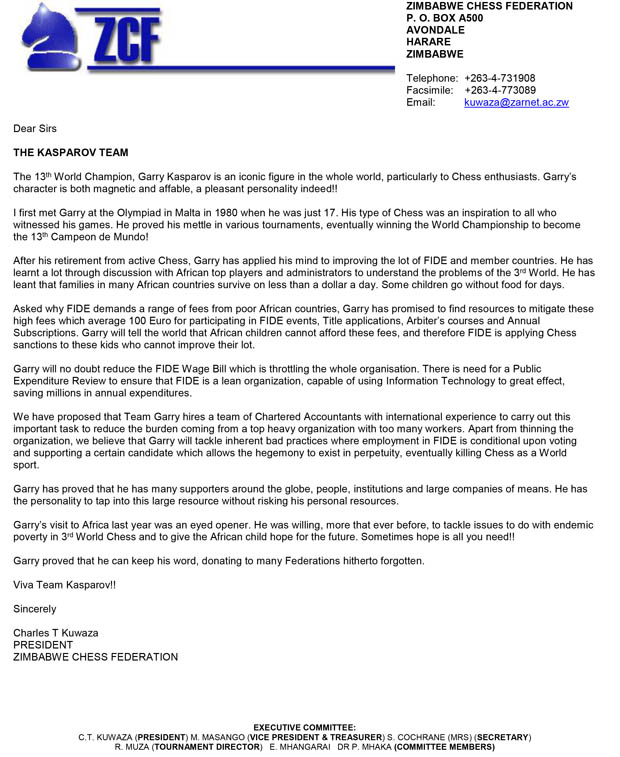