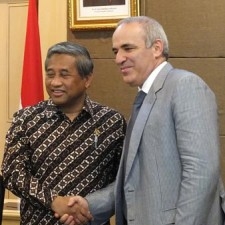 The first tour of the campaign is in Asia and the first stop was Indonesia. Afterward, Garry heads to Singapore, Thailand, Philippines, Macau, and Hong Kong. The launch of the Kasparov Chess Foundation Asia-Pacific is imminent! Garry will return to Asia in 2014.

When we in Indonesia heard that Garry Kasparov would be able to come to Jakarta as part of his campaign for FIDE president we were very enthusiastic. Then we found out it would be his very first campaign visit, a great honor for Asia and Indonesia. In much of Europe Garry Kasparov is a household name, but instead of beginning his campaign on “safe ground” he is making trips to Africa and Asia. This way he gains support and information for his campaign but also draws a lot of interest to chess itself everywhere he goes. 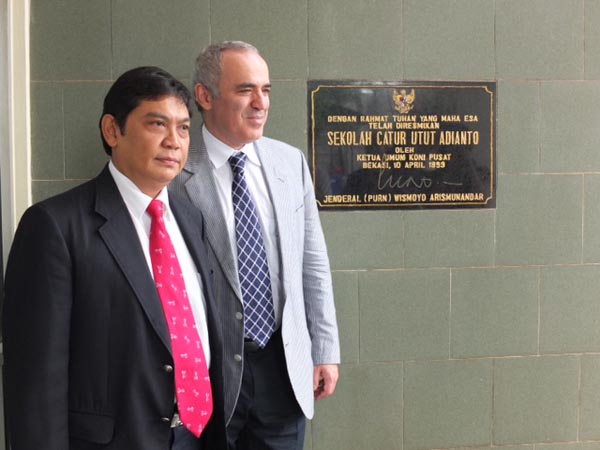 The author with Garry in front of the Utut Adianto Chess School in Bekasi.

Kasparov was very well received in Indonesia – at the official level, in the media, and of course by our millions of chess fans. Chess has great grassroots popularity here, so we are eager to work on ways to match that enthusiasm with public and private support, as Kasparov’s foundations have done. It was good to hear that a new branch, Kasparov Chess Foundation Asia-Pacific, is launching soon in neighboring Singapore. Asia will do much to promote the global agenda of chess in education. We had a meeting with Mr. Muhammad Nuh, the highly esteemed Minister of Education and Culture and it went much longer than expected. Planned for an hour, the meeting with Kasparov had to be interrupted at 95 minutes for evening prayers! Minister Nuh was very interested in the idea of chess as a useful tool to improve the education system. Along with its benefits of logic and concentration, an inexpensive activity like chess that can motivate students could be a very welcome enhancement to the education system. 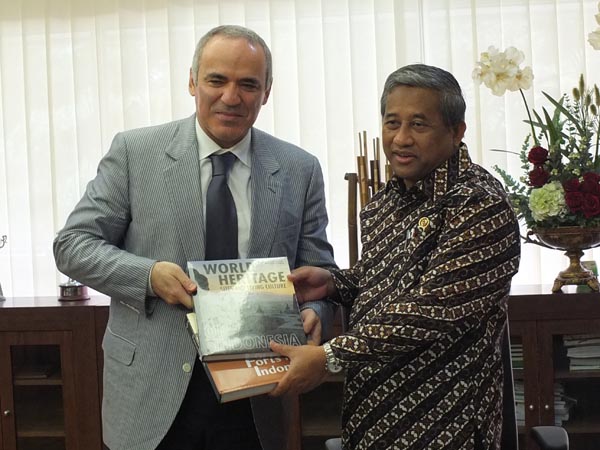 Receiving gifts from Minister of Education and Culture Muhammad Nuh.

We invited Garry here not just for his campaign or to promote chess, but also to hear these ideas and to see his plans up close. As every chess person knows, it is easy to make big statements about how things will improve. So everyone was impressed by Kasparov’s presentation of the Kasparov Chess Foundation’s successes, especially in South Africa. Combining chess with education is an important step, and then bringing technology and social network elements into the program creates a product that administrators and corporations are very excited to see. 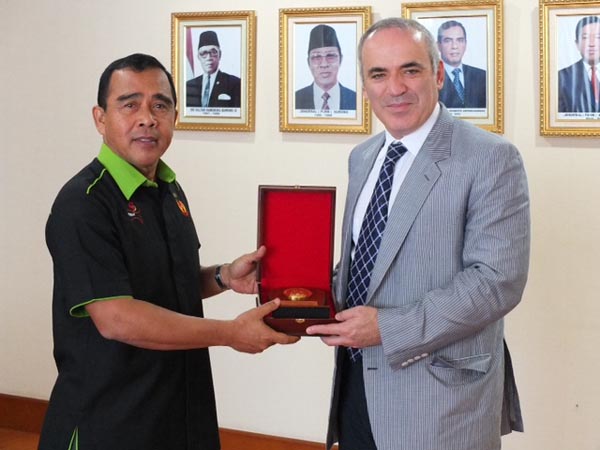 Our meeting with the Indonesia Olympic Committee was very successful and they offered worldwide support. Garry also met with Mr. Roy Suryo, the Minister of Youth and Sports Affairs of Indonesia, who is very knowledgeable on technology and the media. The board of the Indonesian Chess Federation was also enthusiastic and federation president Hashim S. Djojohadikusumo a kind and informative host. We know Kirsan Ilyumzhinov has done good things for chess, but these were typically special gifts and not a stable and sustaining system. We believe chess needs to move to the next level of sponsorship like other sports, where each country can develop and grow as part of a global system. There is no doubt Garry Kasparov is the right person for this job! 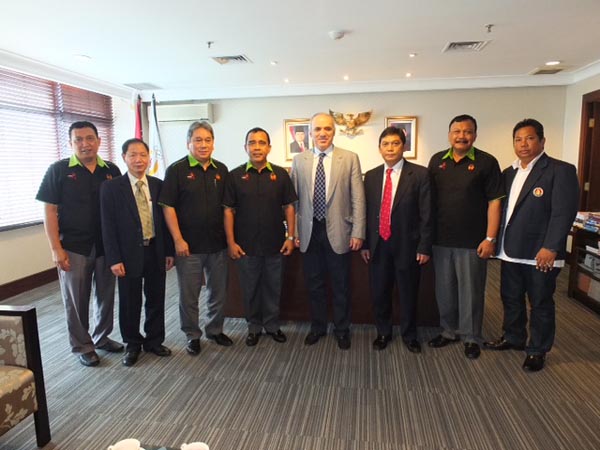 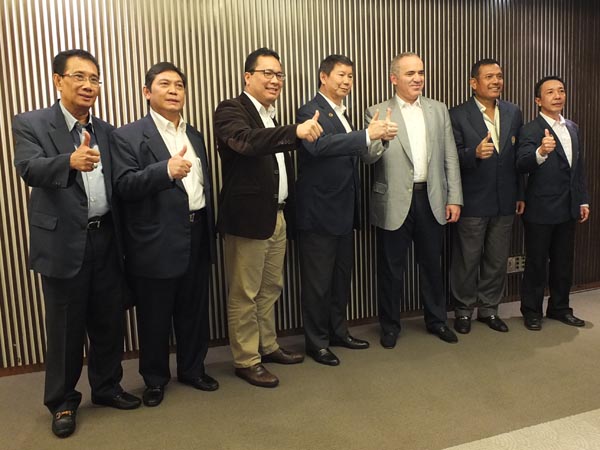 With federation President Hashim S. Djojohadikusumo and the new board of Indonesian Chess Federation

I first met Garry in 1980, when we both played in the World Junior Championship in Dortmund, where he was 17 and I was 15. After he won the event we met and discussed my studies. I told him I was working, but that chess books were hard to find in Indonesia (this is long before the internet and databases!). He told me he would bring me the best Russian book on openings at the Malta Olympiad at the end of the year. Unfortunately, I did not participate in the Olympiad that year. So Garry signed the book to me and tracked down the Indonesian team in Malta to bring the book back to me. It is Panov and Estrin’s “Opening Guide,” and it says, “For my chess friend Utut Adianto, Malta, 01-12-1980”. 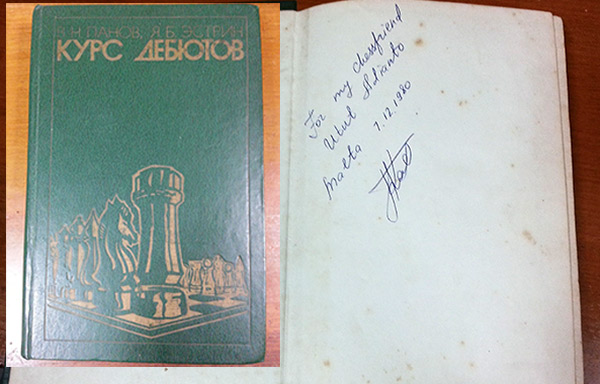 I still treasure this gift today among my collection of over 4000 chess books. In fact, I brought the book to several our meetings here in Jakarta to share this story with the ministers. I told them that in politics it is normal for people to make promises, but then they leave and you never hear from them again. 33 years ago, a great player, Garry Kasparov, made a promise and he kept that promise. And when he promises now, he will deliver! 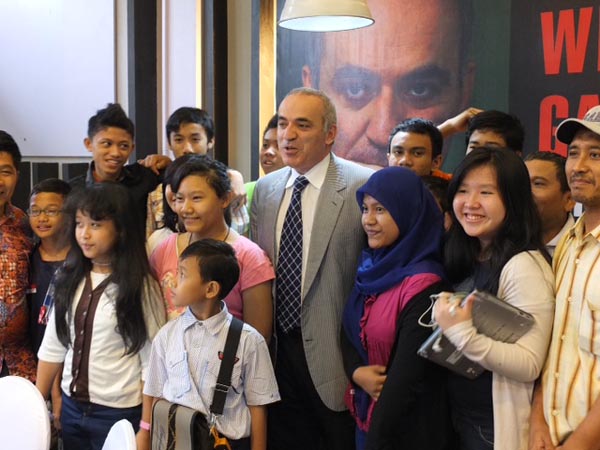 With the next generation of Indonesian chessplayers. 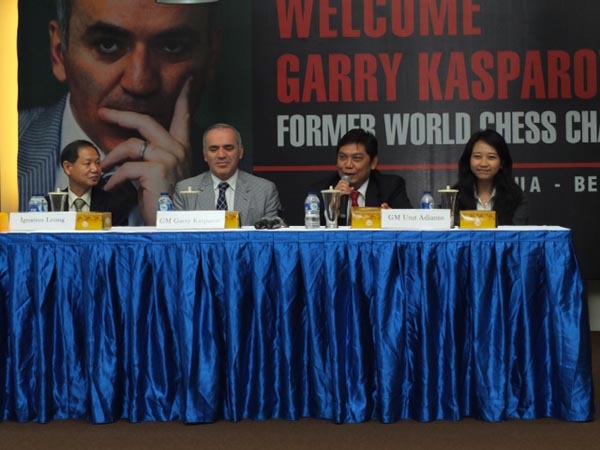 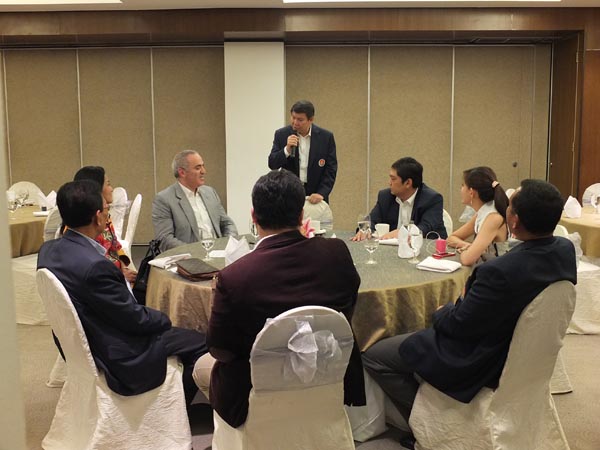 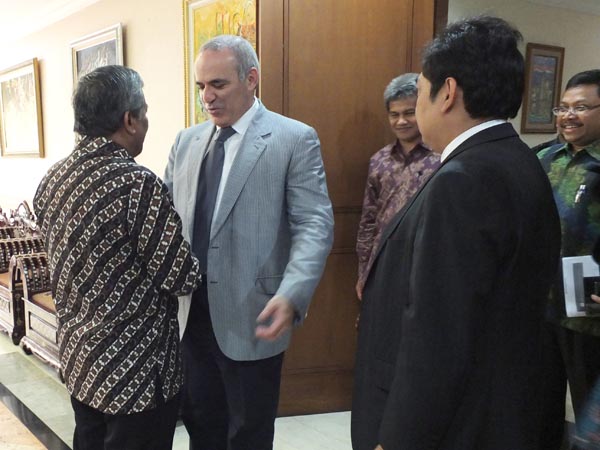 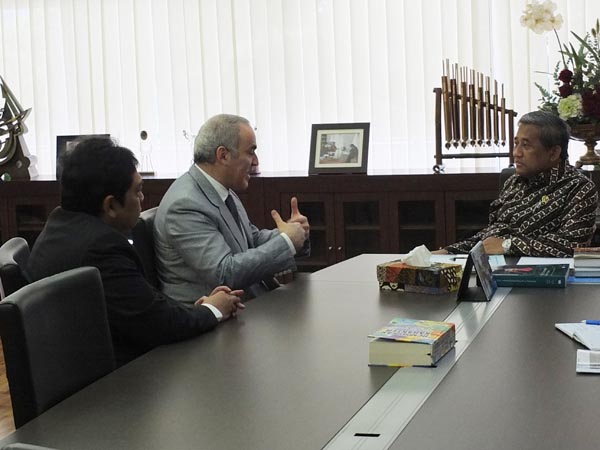 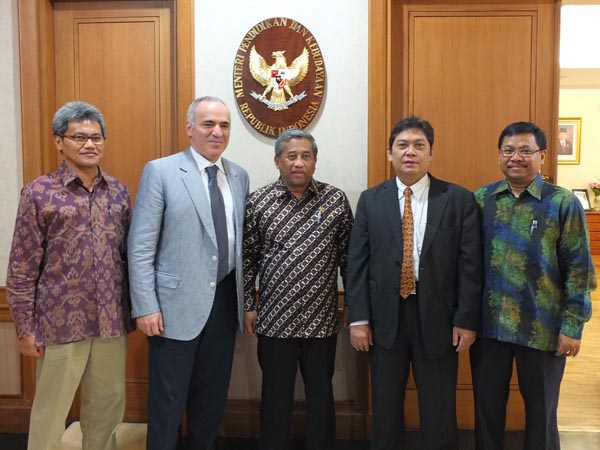 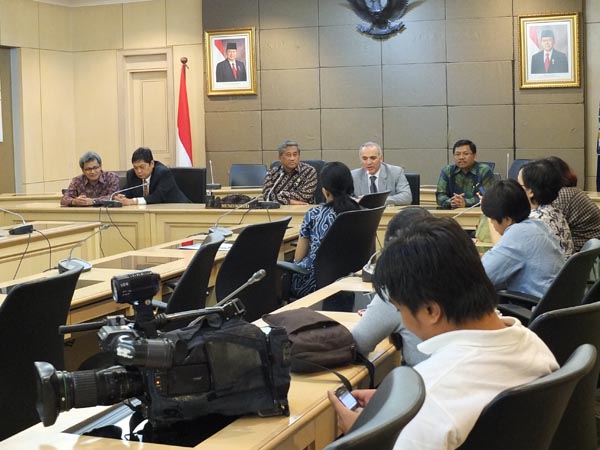 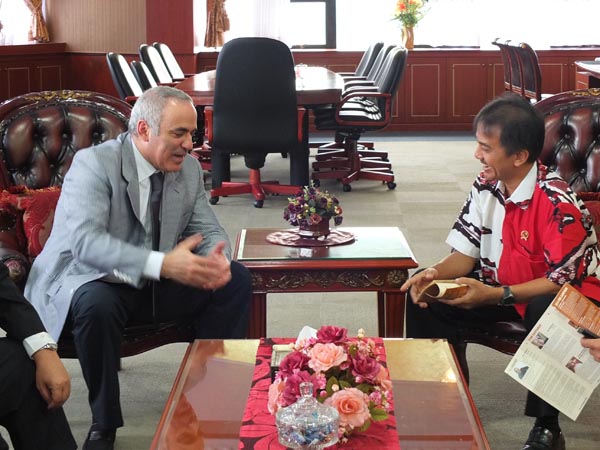 Talking with Mr. Roy Suryo, the Minister of Youth and Sports Affairs of Indonesia. 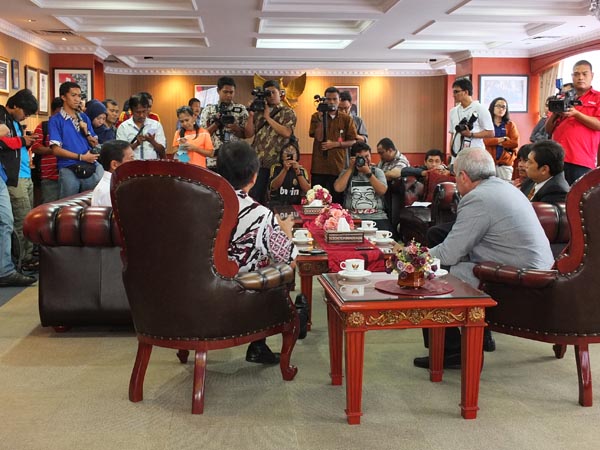 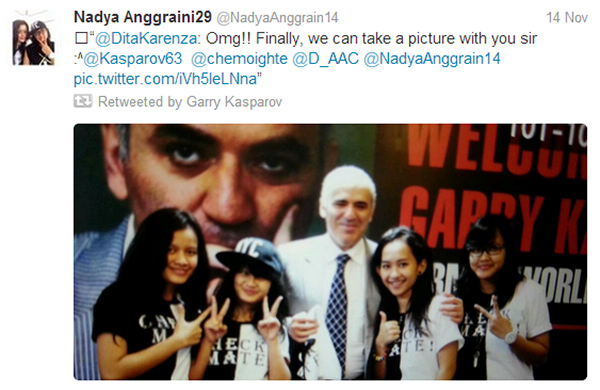 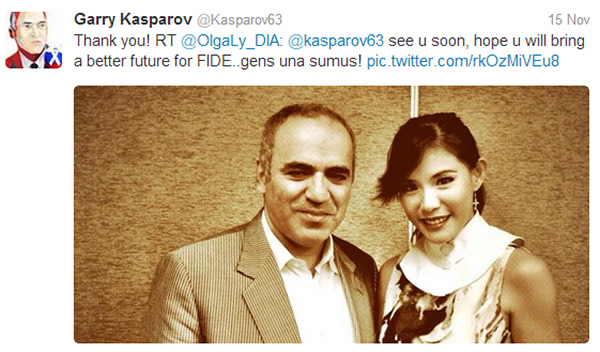 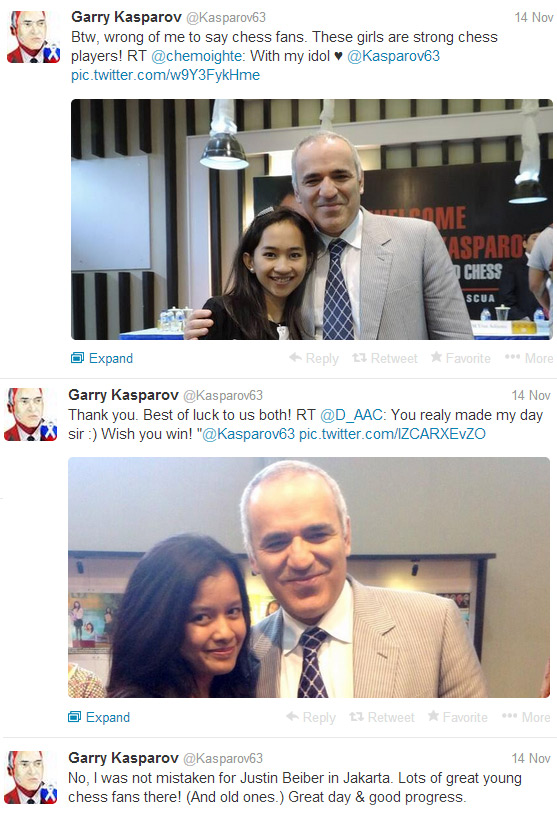