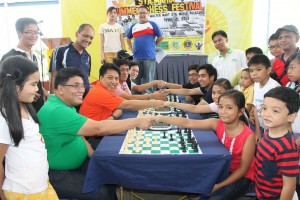 Running on a platform of more equitable representation for Asian countries for more ease in empowering them, Pichay – an accomplished businessman and a consistent outstanding Congressman in his country’s legislature – vows the chess world will see more nations from the biggest continent with him at the helm of ACF.

“If and when given the mandate I will not content myself of just being a ceremonial president. I will be on the ground to feel the pulse of the chess players and leaders and act accordingly so that Asia can move forward at an accelerated pace,” said Pichay who has achieved so much in so short a time as a national federation head.

Tengku, a lawyer and Chief Executive Officer of a strategic investment and financial services company is pitted against a federation staffer.

Going against Omurzakov, a diplomat and Chairman of the Management Board of gold and copper exploration company is a ministry translator appointed vice secretary of a federation.

Milligan, holder of a PhD in Astrophysics and had worked post-doctorate in Cosmology, and on a more mundane plane, a veteran chess internationalist, faces a businessman.

Shaker, a sports management expert serving as FIDE Trainer and FIDE Lecturer clashes with an incumbent employed by the ACF who frequently takes on assignments in competitions to the prejudice of other qualified arbiters, in a Middle Eastern match-up.

The ticket is well – balanced. Four of the five zones outside China and India are represented and in terms of federation representation – 43 of 51 as opposed to the other group’s less than half of the ACF membership.

Perpetuating the Middle East stranglehold on the ACF leadership since 1986 is the apparent agenda of the incumbent leaders. Their slate primarily represents their own zone.

High in the priority of the Team Asia Kasparov bloc is re-structuring of the zones. The anachronistic single-zone federations will have to cease existing, enabling the rest of Asia to have more equal chances.

Concomitantly, the entitlement India and China are enjoying-having zonal presidents, Asian presidential board and certainly FIDE VPs – will have to be stopped.

Time for Asia to rise and share the governance is the clarion call of Team Kasparov Asia.