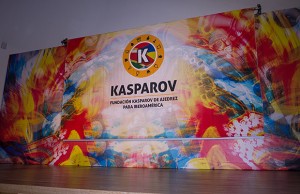 There is so much to report from Mexico that we’re breaking it up into three separate reports, one for each day of Kasparov’s visit! We knew Mexico was excited about Garry Kasparov’s visit to launch the new Kasparov Chess Foundation center and to campaign for FIDE president. But we had no idea HOW excited and how well prepared! Everywhere Garry went there were huge crowds, top politicians, big sponsors, and even bigger signs. 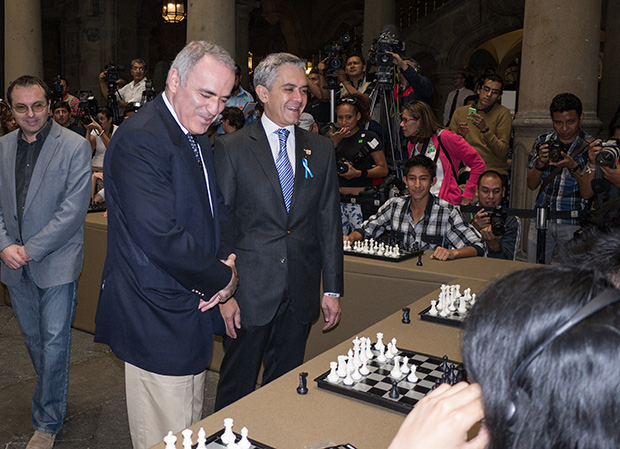 “I thought I had seen just about everything, to be honest,” said Kasparov. “But Mexico City has surpassed my wildest expectations in so many ways. First off, the fans and even non-chessplayers showing so much interest and support. Education unites everyone! Then, the unanimity of political support here for KCF and chess in education is amazing. The mayor, the senate, the congress, the city assembly, they all joined in, across party lines! One joked it was the first time the PRD and PRI guys wanted to be in the same photo together! The Sports Minister, Jesús Mena, even came to speak at the KCF opening. I’m very grateful for all their support and efforts. And I must give special mention to my friend Hiquingari Carranza, director of the new KCF, for making all of this possible. He did so much great work that I think I could have asked him for another pyramid in Teotihuacan and he could have built it in a month!

The inauguration of KCF Ibero-America was truly special for many reasons. It completes the first phase of our global reach: New York City, Johannesburg, Brussels, Singapore, and now Mexico City, to coordinate for all of the Spanish-speaking world. The event itself was also remarkable. The Museo Soumaya is one of the most spectacular buildings in the world, and for them to donate it for the event was tremendous. When I was first there last year I knew having a chess exhibition next to Rodin’s “The Thinker” would be perfect, and it was. And all that was just on my first day in Mexico!

Kasparov couldn’t know on that first day that he would also get a special meeting with Mexican President Enrique Peña Nieto on his last day in the country, when the two of them both happened to be in Acapulco! But we’ll save that for the next report… 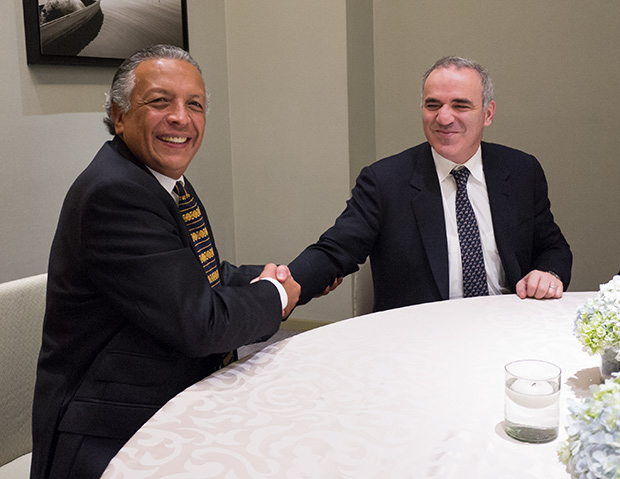 A firm handshake with Hiquingari Carranza after signing the papers formally launching the Fundacion Kasparov de Ajedrez para IberoAmerica. Carranza is the president and is already hard at work.

The morning started very early with a big press conference. Several dozen journalists were on hand and Kasparov covered nearly all the bases of the benefits of chess in education for kids. Little did he know that no convincing was needed in Mexico! As we would soon find out, nearly every politician in the country was ready to announce full support for an ambitious program to bring chess into thousands of classrooms. (A video of this and several other press conferences will be published as soon as we complete the transcripts.)

The first stop was the national Senate, an impressive new building. Kasparov was received by Lilia Guadalupe Merodio Reza, a Senator representing the state of Chihuahua. A chessplayer herself, she promised to do whatever she could in the Senate to aid KCF and chess programs in the schools. 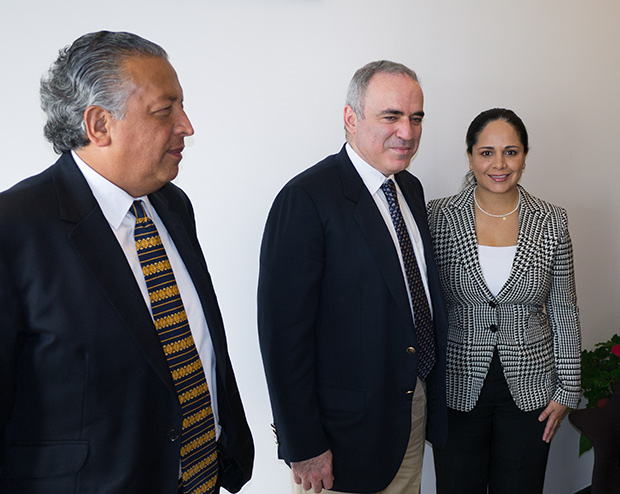 With Senadora Lilia Guadalupe Merodio Reza in her office. 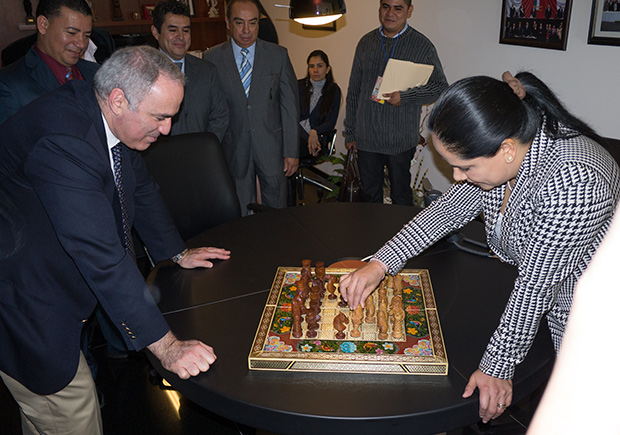 Already a challenge! As expected, a tactful and friendly draw was agreed.

Next on the very packed agenda was a meeting with Mexico City’s Secretary of Tourism and a presentation of chess in education in a beautiful building that used to house a convent. Hundreds of students and educators attended. 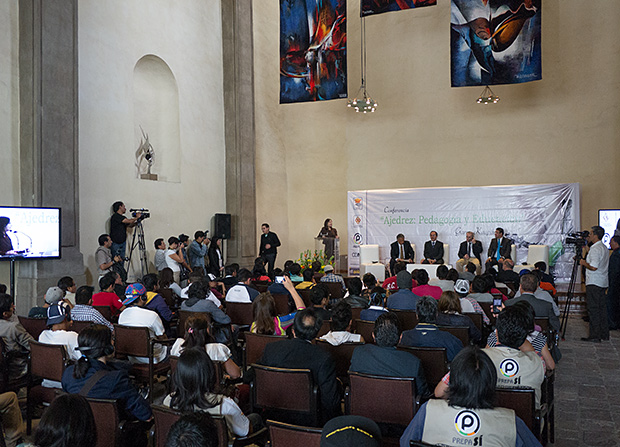 Then it was back in the bus for another voyage through the only negative from the trip: Mexico City traffic! Even with a special escort of two city traffic motorcycle police it was hard to make it to each appointment on time. 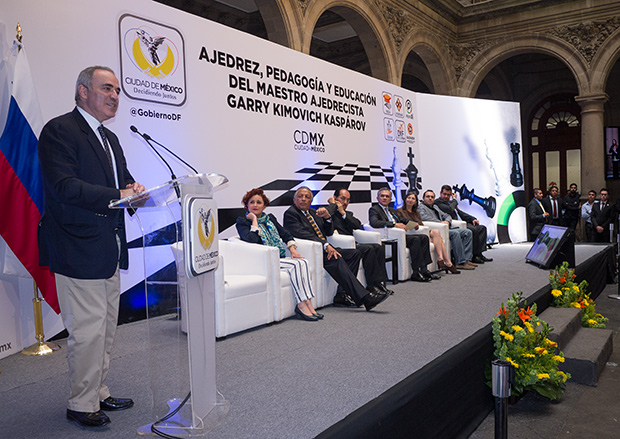 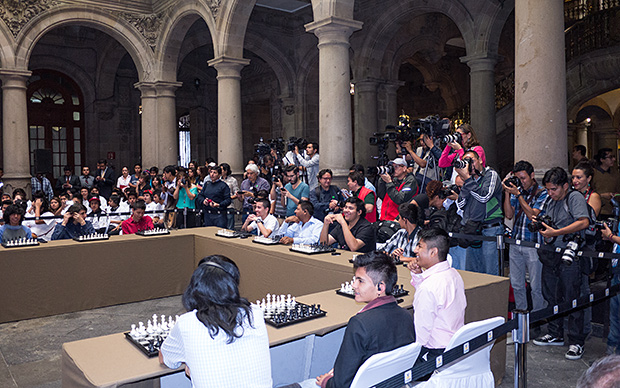 Kasparov was bowled over by the showing at the Cabildo, the home of the huge city government and the mayor, Miguel Ángel Mancera. The mayor announced full support from the city for programs to reach up to one million children! Kasparov blinked in his chair as the translation came through, “Did he say a million!? Wow.”

A simul was also in place, but with only 15 minutes to play! A decision of Solomon was required and an ingenious solution appeared: Kasparov started each game and played until he absolutely had to rush to his next meeting and GM Nikola

Mitkov, on hand as a visiting trainer from KCF, finished the games! (This situation, arranged exhibitions without nearly enough time to finish them, became a sort of theme of the trip, as we’ll see in the next reports. Enthusiastic organizers often don’t realize that even a Kasparov cannot play a dozen or more boards in 15 minutes!)

But there was no time to lose, as Kasparov was expected at the Camera de Diputados, the national parliament. Congressman Fernando Zárate Salgado was our special host, and he and the Political Council leader Silvano Aureoles were very enthusiastic about the potential of chess as an educational tool. (We’ll publish Congressman Zárate’s press conference with Garry as soon as we complete the translation.) 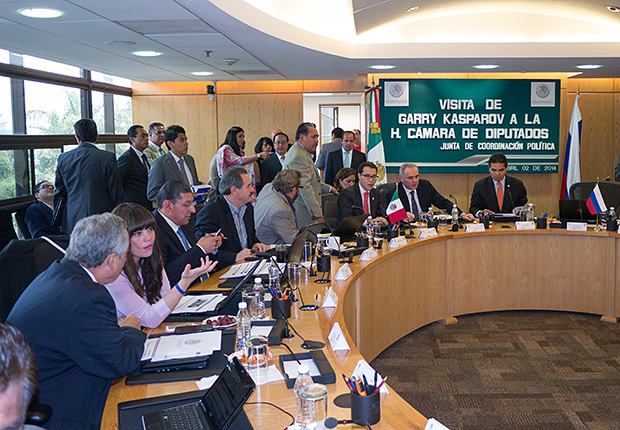 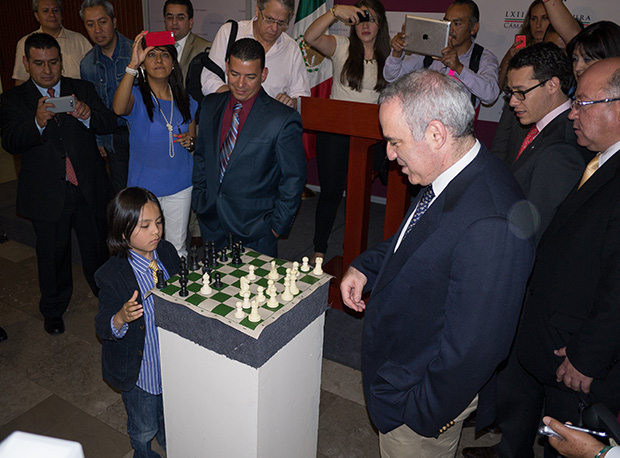 A challenger arises! A surprise guest at the Congress was the age group champion of Mexico City for an impromptu game of blitz with the former world champion. To Kasparov’s right is the very impressive young Congressman Zárate, who is spearheading the chess in education campaign in parliament.

Believe it or not, the main event of this one incredible first day in Mexico City was still to come! The inaugural event of the Kasparov Chess Foundation Ibero-America took place at the spectacular Museo Soumaya, named for the wife of its patron, Carlos Slim, the world’s richest man, and designed by his son-in-law, architect Fernando Romero. Its interior is as stunning as its exterior, and the collection boasts the greatest number of Rodin sculptures outside of France. 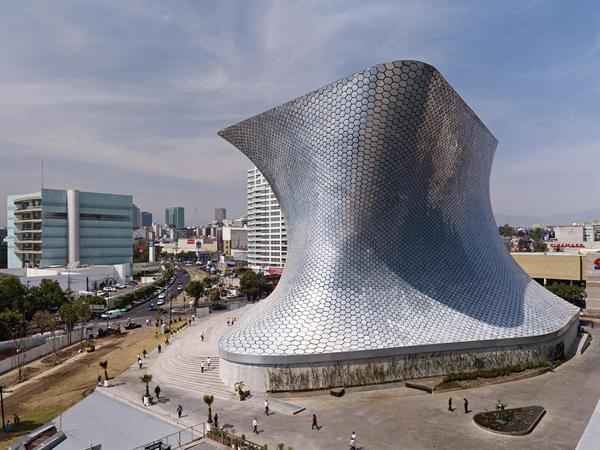 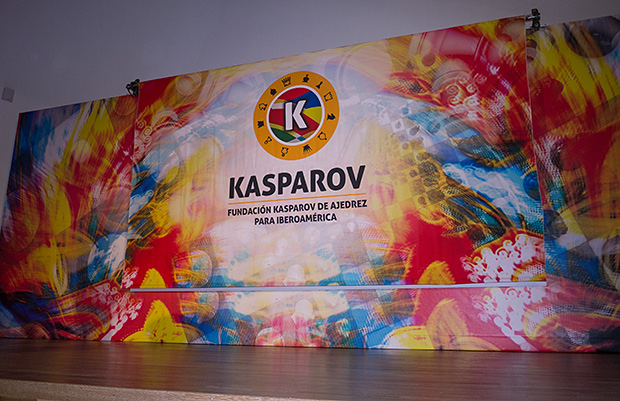 A video screen lifted to show several top-notch video montages about chess, its history, and its many proven benefits for kids in education. Meanwhile, hosts included a well-known Mexican television presenter and famed Spanish chess (and other sports) journalist Leontxo Garcia, who first met Kasparov in 1982 and accompanied him on this trip in order to interview him for his next book. 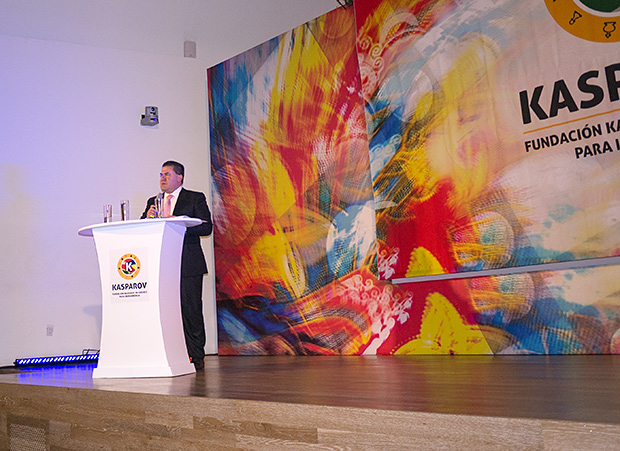 Jesus Mena, Director General of CONADE, which oversees culture and sport, including chess. The former Mexican Olympic medalist endorsed the work of KCF and also Kasparov’s campaign for FIDE president! 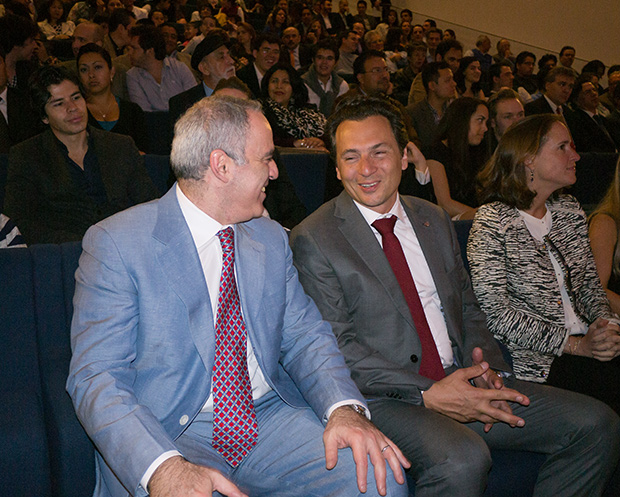 Emilio Lozoya is the CEO of Petróleos Mexicanos, better known as PEMEX, one of the world’s largest companies. He’s also a chess fan and supporter of Kasparov’s efforts to promote the game as a sport and education tool in Latin America. PEMEX, along with Banamex, the Slim Foundation, and many other big sponsors made the new Foundation center and this amazing event possible. 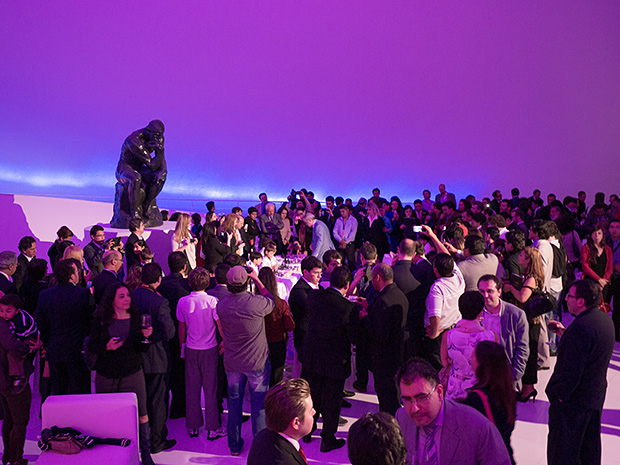 The thinker under The Thinker. After a clip from the famous old film “Chess Fever” (starring Capablanca himself) played on the wall, Kasparov began his simul. 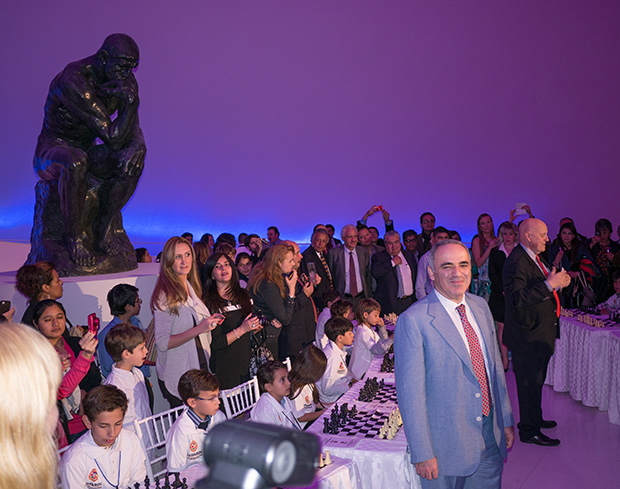 What a night! Leontxo Garcia in the background. During the simul, Leontxo entertained the crowd with his encyclopedic knowledge of Kasparov’s career, chess history, and its many benefits for kids, adults, and seniors.

And that was just the first day! Tomorrow we’ll post Part II with more political support, more media appearances, and a visit to Toluca that must be seen to be believed. 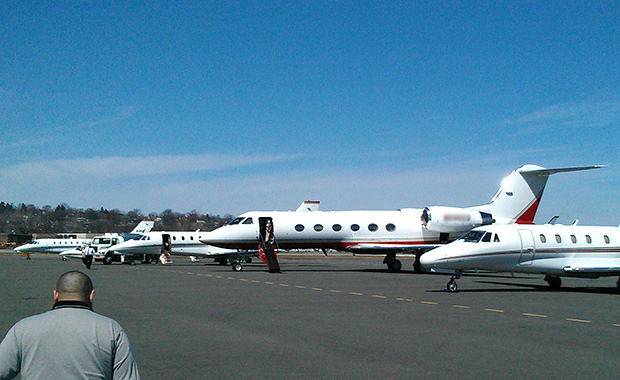 The very friendly skies! Frequent travel becomes much more convenient when a sponsor lends you a private jet. (It’s the big one in the middle.)