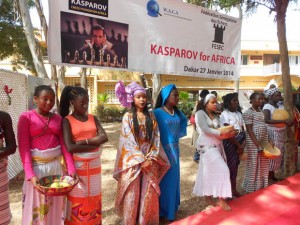 Amazing Hospitality in Senegal for Kasparov

Garry Kasparov launched the West Africa portion of his latest campaign tour in Senegal. He was very well received on every level, from the national governments to chess officials to chess fans. Speaking after his visits to Senegal and Ivory Coast, Kasparov said,

“These have been some of the most amazing days of my life. The enthusiasm here for chess, for what it can do for kids and for education, is really amazing. They see what we have done with the Kasparov Chess Foundation Africa and are inspired. I appreciate their respect for me and my achievements, of course, but I also know that I have much to see and learn here.

I have always talked about fighting spirit being the most important characteristic of a champion, and they have that spirit in unlimited quantities. They want to fight for their future, and for the the future of chess, and I’m very happy that we will be fighting together!”

Report and photos courtesy of the tireless Larbi Houari, and are also available on our site in the region’s more popular French language. 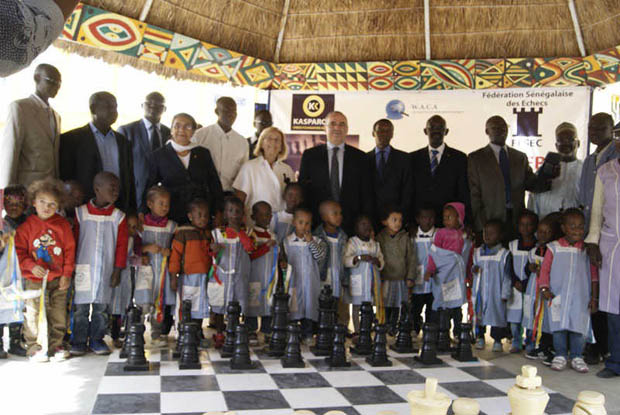 Dakar. Sunday, Jan 26th, 2014. At 4:30 pm. The flight from Brussels just landed at Leopold Sedar Senghor airport and on board was the living legend, Garry Kasparov. 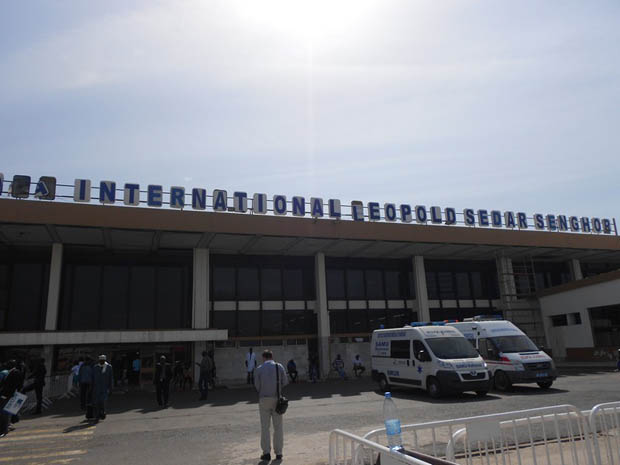 In the VIP lounge, Boubacar Diallo, President of the Senegalese Chess Federation, awaited along with Larbi Houari of the West African Chess Association (WACA), who arrived yesterday.

Boubacar (Bouba) expected at the same time the arrival of three other federation presidents also invited to these meetings: Ousmane Diakite of Mali, the Gambian Antouman Njie, and the new president of the Ivorian federation Essis Essoh. 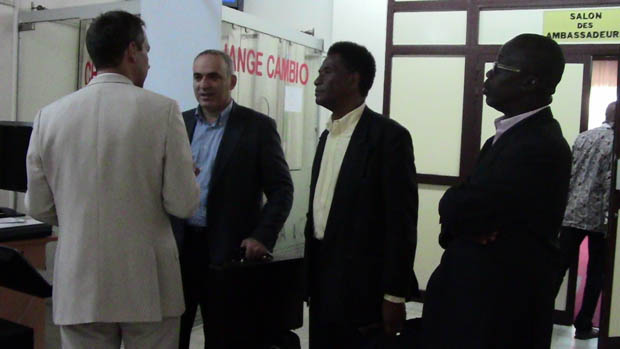 The Program was about the drawing of the most accurate picture concerning the situation of chess in West Africa. In the Terrou-Bi lounge, a sumptuous hotel bordering the coast of Dakar, the participants in this exceptional meeting reported the results of FIDE in the region, the local specifications as well as the desire to work horizontally between countries in this region. 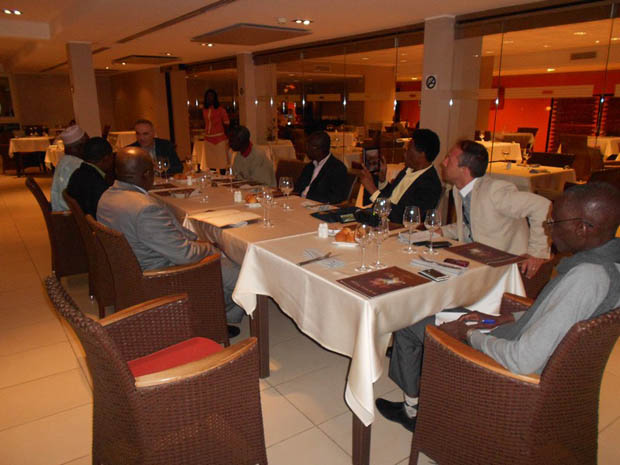 Garry Kasparov is very clear: “I do not pretend to know what development method best suits your situation, or even the current state of your locations. But I am convinced by the needs and wishes of the African continent, particularly sub-Saharan Africa which is, now, a priority for me. I am here to listen to you and wish to have a clear plan before I leave. ”

“For the first time, a FIDE election candidate is not afraid of regional organizations,” exclaimed Bouba. “Usually, they try to approach us one by one discreetly!”

The next Monday, January 27th, was a busy day. Garry said: “I want to be a facilitator for you; I will assume this role with local political and business leaders.”

At 10:00 am, Boubacar Diallo led Garry Kasparov, Larbi Houari, Ousmane DIAKITE, Antouman Njie and Essis Essoh to the Ministry of Sports. There, Sir Mbagnick Ndiaye and a delegation of the Olympic Committee were awaiting them. 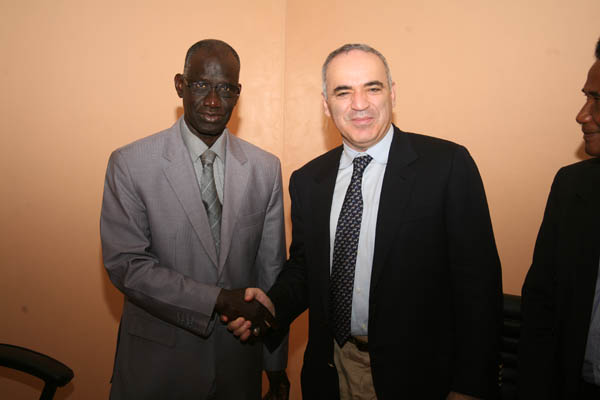 After a first exchange in the presence of the media, the group gathered around the Minister. He intended to support Chess and warmly thanked his guest for gracing Senegal by his presence. “We need your presence to give light to Chess in our country.” 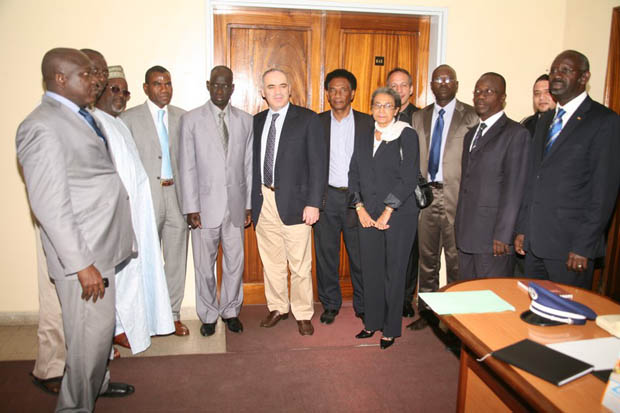 Very quickly, G.K. is led to “Sainte Marie de Hann” course, a Dakar school which has more than 4000 students of all ages and more than a hundred teachers. What can I say? All the students were celebrating! Traditional music, folkloric dance, clothes of all colors representing the cultural and ethnic diversity (more than 30 different nationalities) that characterized this unique facility in the region. 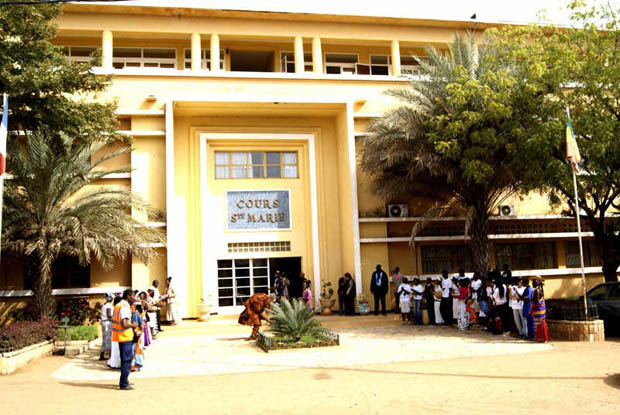 Everybody is waiting for Garry Kasparov!

Marie-Hélène Cuénot, the Sainte-Marie de Hann Course Director, invited Garry Kasparov to visit all 8 wooded acres. On either side of the path the children shouted the slogan of the school “long live peace!” and were delighted to receive a visit from the legend. 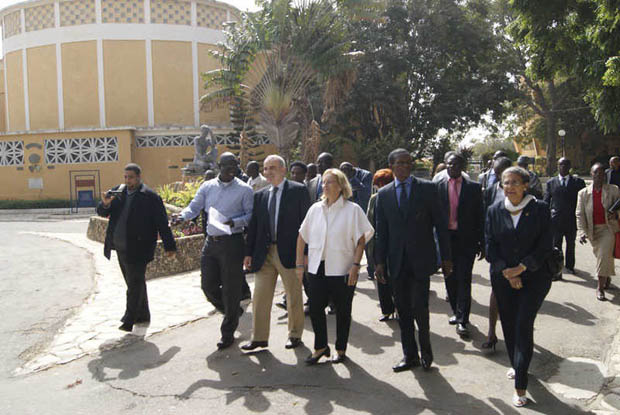 After listening to the children’s welcoming message, which was spoken in a dozen different languages, including Russian, GK launched the school chess tournament specially designed for his arrival. He spoke, on this occasion, about the benefits of chess at school. 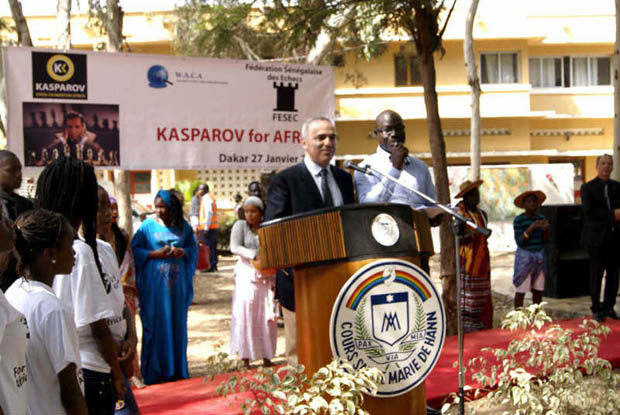 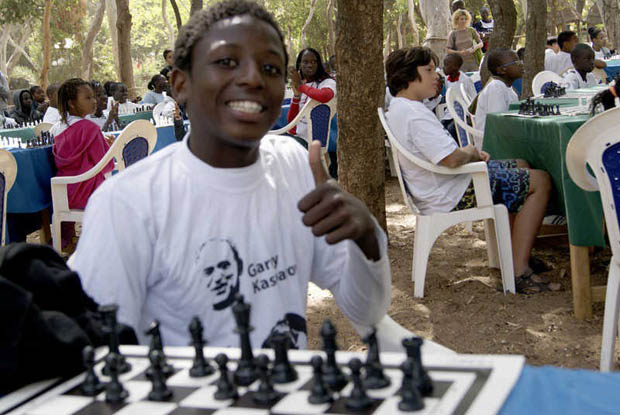 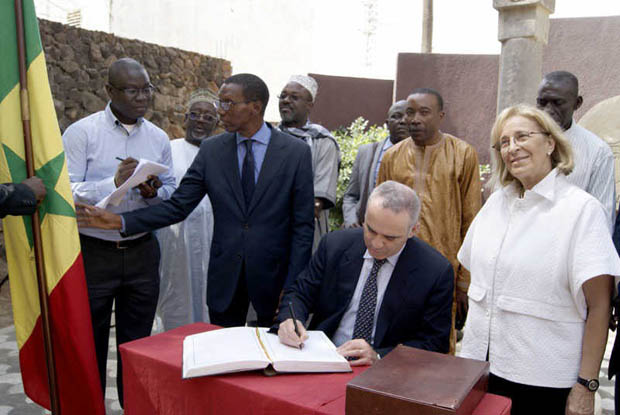 The last stage of the visit, which took more than one hour and a half, was the unveiling of a plaque that will forever mark GK’s visit to Dakar, thus entering an exclusive list of our era’s great personalities. 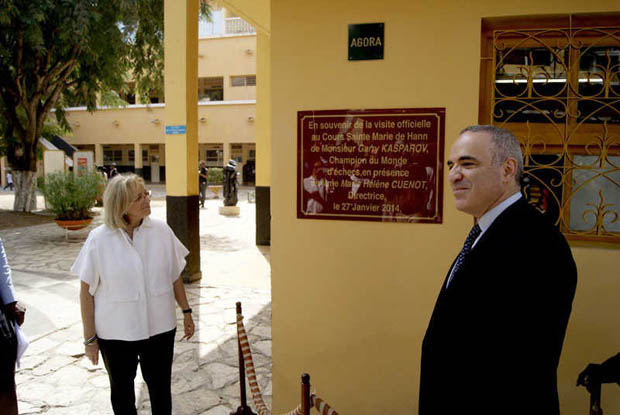 A group picture finally immortalized the tribute paid to the late Nelson Mandela, who preached peace, which is originally a value defended by the Sainte-Marie de Hann school. A minute of silence was observed at the end. 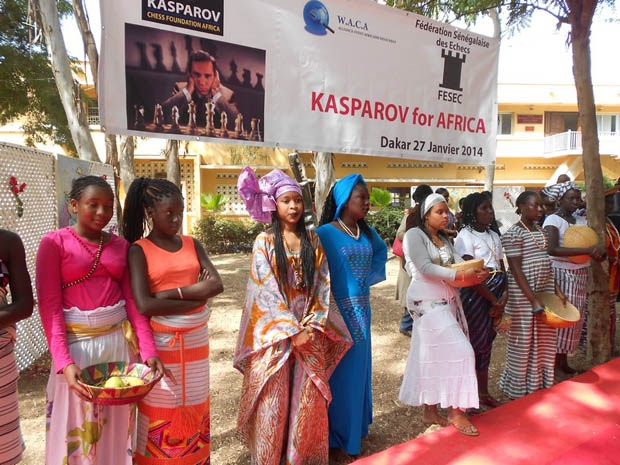 However, Garry Kasparov’s agenda has just started! Very quickly we had to go for lunch. The Olympic Committee Delegation and the Minister’s advisor Ibrahima Cissé were especially assigned to attend. 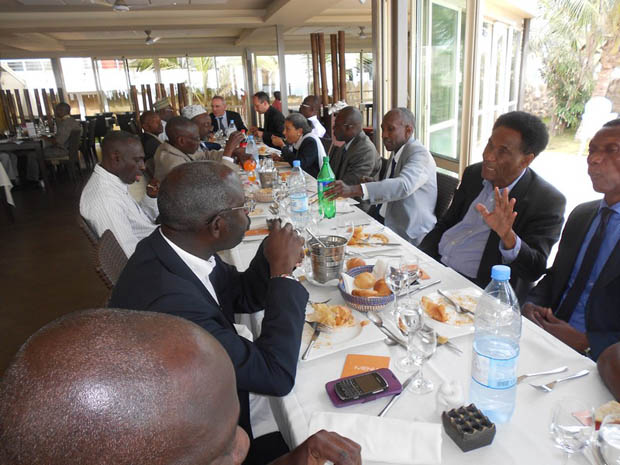 It was one of the moments that would undoubtedly stay with the world champion from this African tour. Mr. Ibrahima Cissé and Boubacar Diallo took Garry Kasparov to Gorée Island. 15 minutes from the coast of Dakar in a longboat, the same one that took Barack Obama seven months earlier. 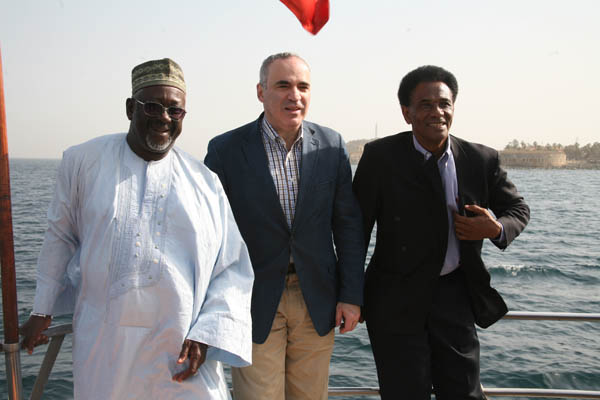 The tour of the slaves’ house culminating with the “door of no return” made all visitors forget about the tour: all faces were drawn and solemn. Gorée is still an intact memory of history’s atrocities. 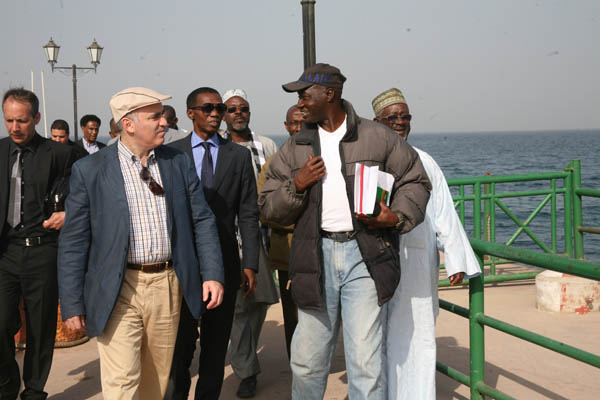 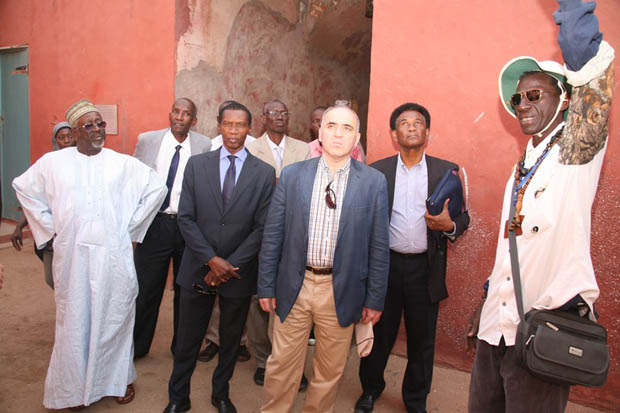 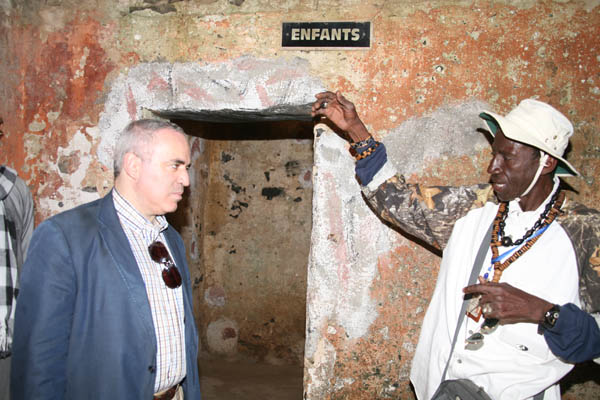 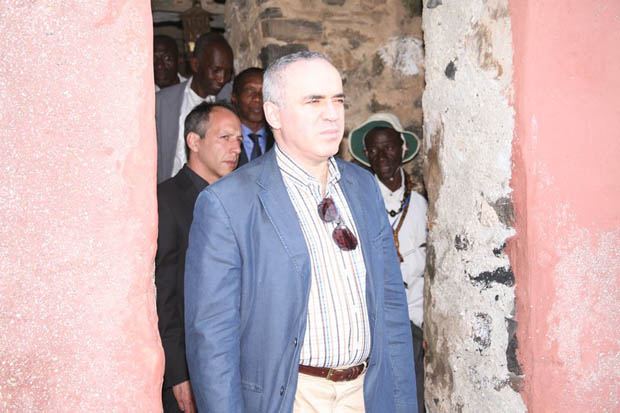 Garry Kasparov receives from the hands of Tidiane Camara, the deputy mayor of the island, the prestigious symbolic title of Ambassador of Gorée. It was 4:45 p.m. 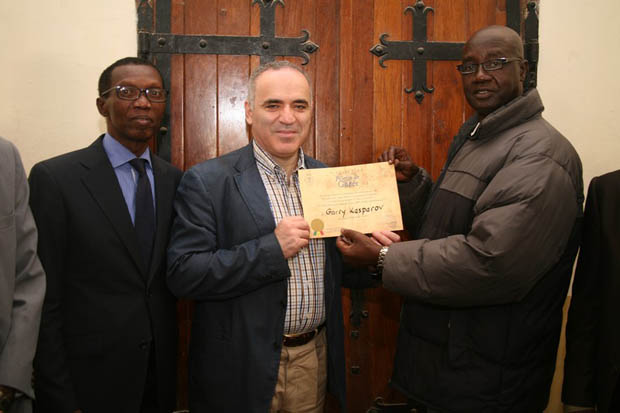 After a brief press conference, the chess star is invited to return to the presidential longboat. 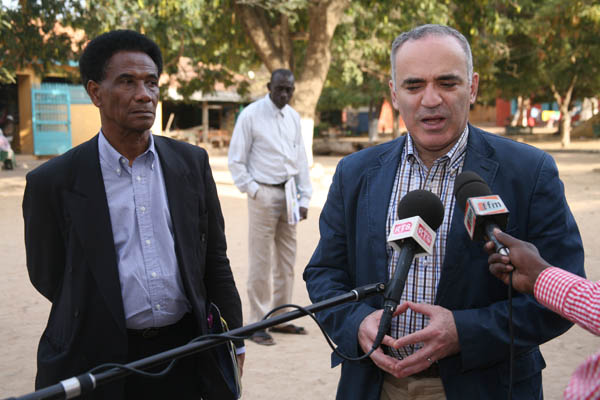 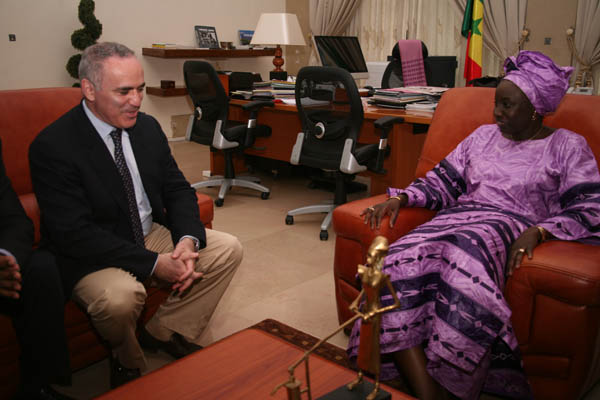 Garry Kasparov is received at 6:10 pm by Mrs Aminata Touré. She was very friendly and pleasantly surprised that chess is coming back to Senegal through the “front door”. She strongly encouraged initiative and urged the federation to continue this momentum.

Garry Kasparov expressed his thanks for the warm welcome of all Senegalese hosts and participants and promised that Africa in general, and the West in particular, will be for him a priority project. Mrs Aminata Toure finally invited Senegalese participants to produce champions modeled on Garry Kasparov and assured them of her personal support.

It was time to return to the hotel for a final cocktail in the company of the present federations and Senegal’s Olympic Committee. 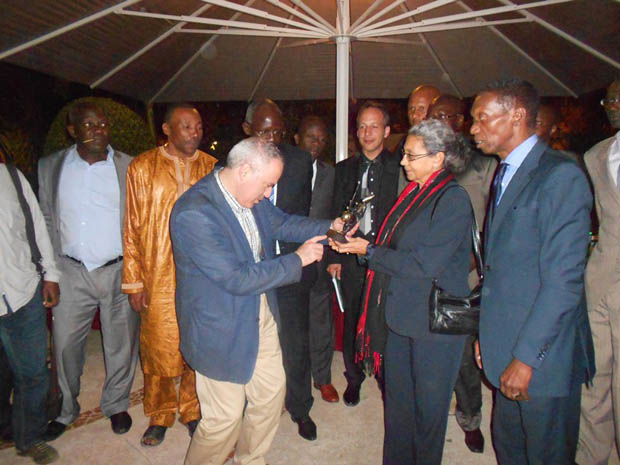 The Olympic Committee offering a traditional present to G.K.

Not only will it be a phase of concrete cooperation with the Kasparov Chess Foundation Africa, but also a short-term priority project. GK responded to this opportunity by accepting an interview with the BBC radio broadcasts in French and English on African airwaves. 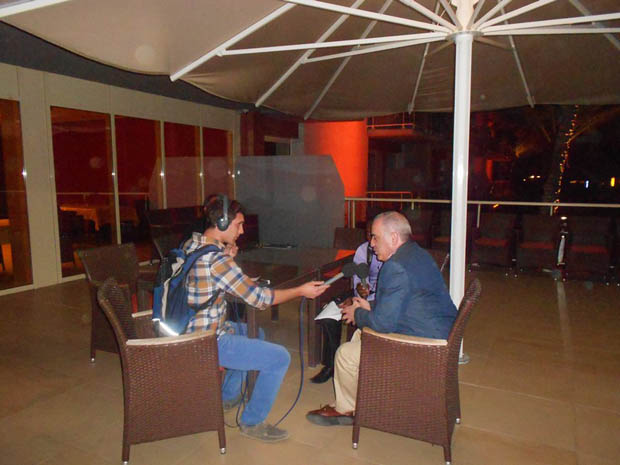 He finally took leave, not without a lengthy exchange with Senegalese guests, players, referees and members of the federal office! The next day at dawn was his departure to Abidjan in Ivory Coast via the Guinea Conakry with Mr. Larbi Houari, who was also expected on site. 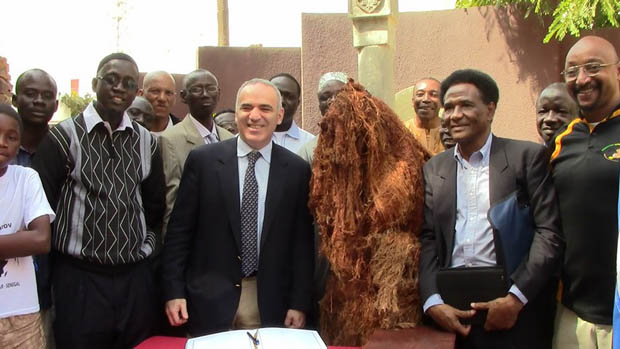