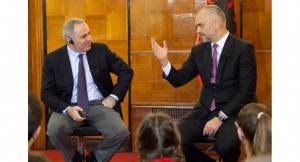 Edi Rama and Albania Welcome Kasparov and Chess in Education

[ A special photo gallery from Garry’s trip to Albania is coming! ]

In the framework of innovative program “Sport in School”, Prime Minister Edi Rama held a meeting with the world chess legend Garry Kasparov, who was in Tirana with an invitation of Albanian Government and under the auspices of the Ministry of Education and Sports and the Ministry of Innovation and Public Administration. In the meeting held at the prime minister were also invited young people, students, and chess sport fans, among them were also former Albanian champions of this sport. 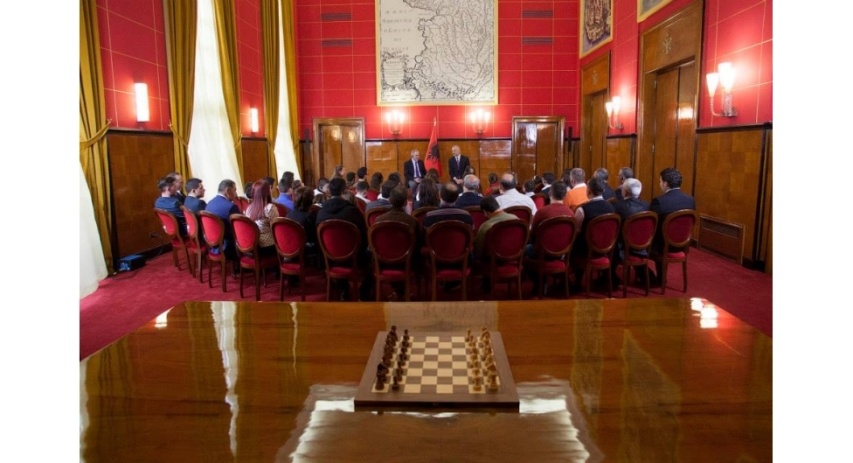 Prime Minister Edi Rama stressed the commitment of the government to make available to this innovative program all the possible human and material capacities. Prime Minister evaluating the pilot project as a step towards progress praised the inclusion of chess in education as a direct investment in growing of human capital capacity of the next generation. Expressing his satisfaction with the contribution of a prominent figure as Kasparov in this program, the Prime Minister emphasized that this is a necessary investment for knowledge and welfare. 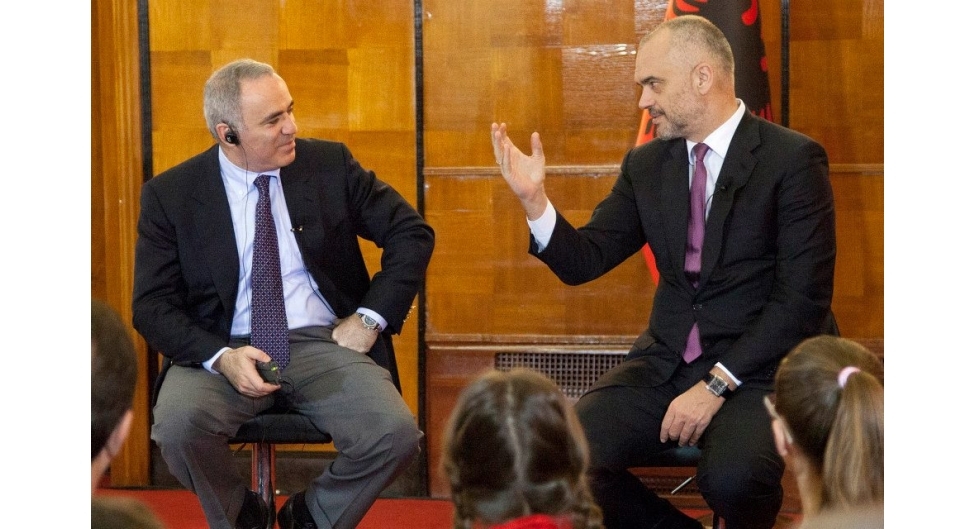 “We are very keen to develop this project. We are very committed to make available for establishment of this new and innovative program all our capacity, material and human potential, starting with a modest number of schools, 10 of them, but with the ambition to develop much more rapidly. Because we believe that the inclusion of chess in education is a direct investment in the growth of the next generation of human capital. Having a legendary master who supports us and encourages us in the first place with his knowledge in this important project, we feel safer because at the very last, I want to share with you a conviction:

Wealthy countries and rich ones do not differ from what God or nature has given them, but by how much they know. Who knows more, has more, and who knows less, has less. Who invests in more knowledge today, invests in more welfare tomorrow. Therefore, this is investment in knowledge is an investment also in welfare. Therefore, for us it is a very important investment, just to make it possible for children to start thinking in front of the small screen, as the master said, not only based on numbers, but based on strategies”. 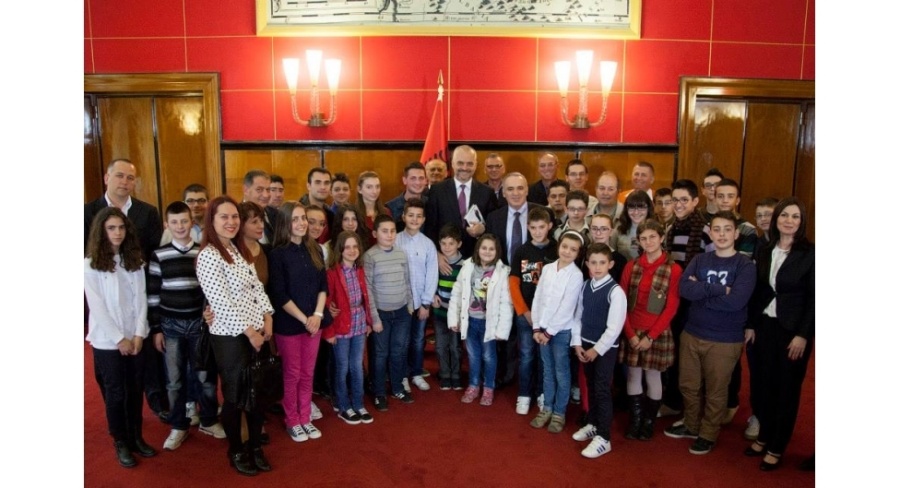 From his part, the former world chess champion Garry Kasparov, praising the initiative of the Albanian government said that the sport of chess is a perfect tool to prepare the young generation for the challenges of modern education.

Invited to the meeting were former champions of chess in our country, among whom, Fatos Muça and Rozana Gjergji.

At the conclusion of this meeting former world chess champion Garry Kasparov donated his book with a dedication to Prime Minister Edi Rama. 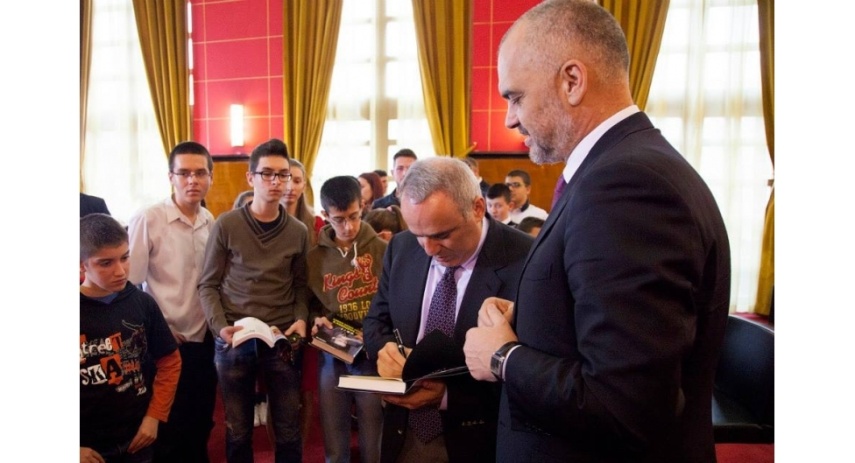 Within the innovative program “Sport in schools”, Mr . Kasparov accompanied by Minister of Education and Sports, Mrs. Lindita Nikolla and Minister of Innovation and Public Administration Mrs. Milena Harito and International Grand Master of Chess , Mr. Erald Dervishi, presented at the elementary school “Pjeter Budi”, the chess program and curriculum through computer -based platform based on use of modern technologies. 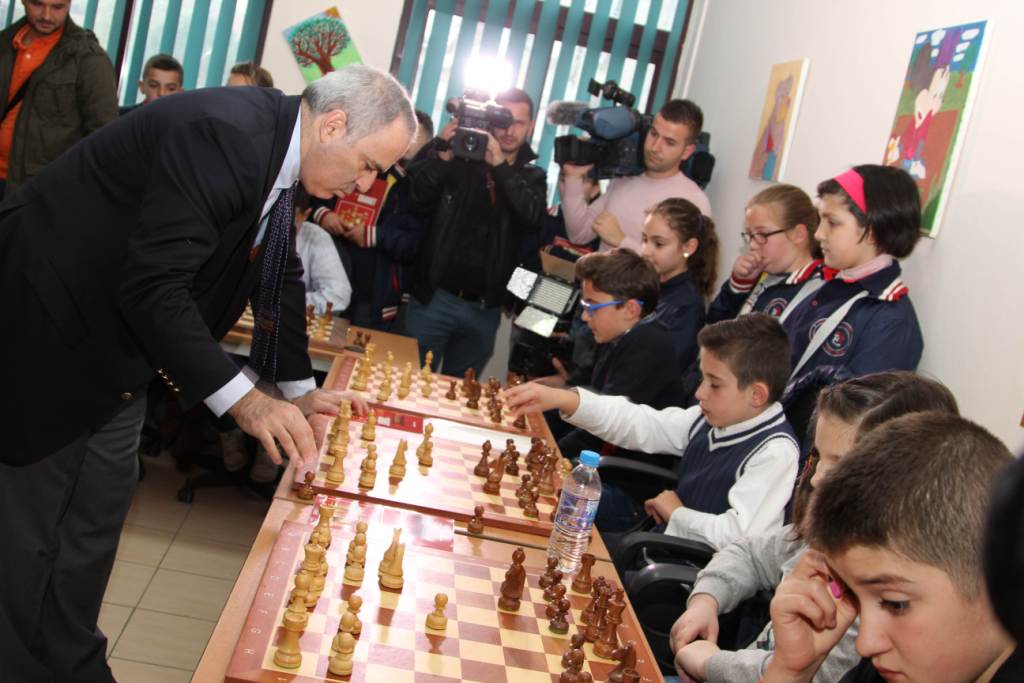 Two ministries that of Education and Innovation, will soon take the initiative for inclusion of chess in school curricula, program which will initially enter as a pilot project in ten (10) schools in the country and in some schools selected as pilot schools for the MAS project “Schools as Community Centre”. After the joint press release, the former world champion, held in the premises of the school a simultaneous chess game with the children from Albanian Academy of chess, match that served as a lesson for the next generation Albanian Chess players.

On March 23rd, 2014, was organized a meeting with Albanian Chess Federation. During the meeting with Mr. Garry Kasparov in the presence of the President of the Federation, Mr. Rezart Taci, members of the Presidency and Chess players, Fatos Muco the International Master, Grand International Master Mr. Erald Dervishi and Mr. Kristaq Andoni was discussed in connection with the project of chess in school, as well as the issue of the next election for President of FIDE, in August 2014. 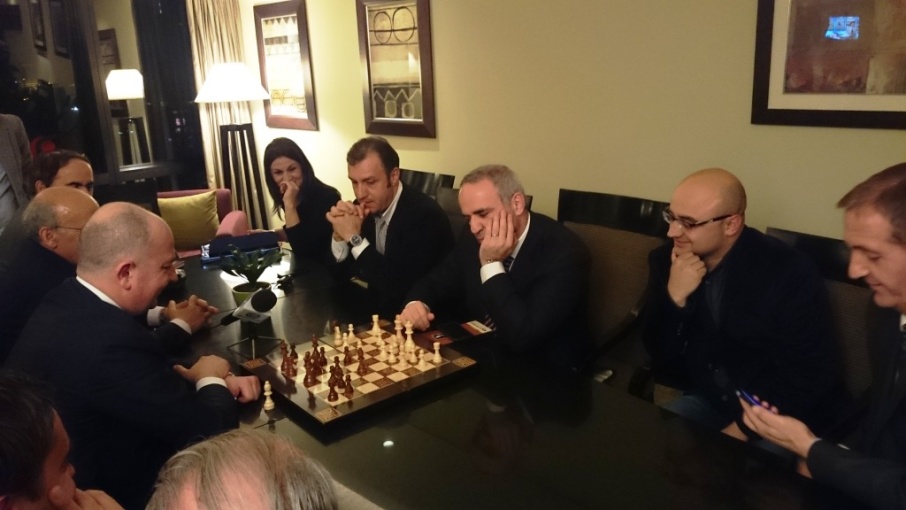 “It is my first visit to Albania, and Chess Federation is very active here. I hope that my visit in Tirana will help bring the popularity of chess in the highest levels, and to convince the Ministry of Education and Sports of the importance of chess in education system. This is one of my long-term goals. My visit here is part of my global tour that I took in the nomination as President of the World Chess Federation.

I hope that the federation will support my plans for forming global chess world. For me, elections in elections in Norway there are not just a day of elections and winning, I want to work now, and so I decided to establish long term contacts with the respective federations,” said Kasparov. For his part, the President of the Albanian Chess Federation expressed satisfaction over the presence of Mr. Kasparov in Albania and for meeting with him and establishment of connections.