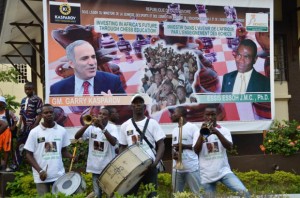 A Welcome for a (Chess) King in Ivory Coast

The second stop on Garry Kasparov’s latest campaign tour was Ivory Coast, where he was received with such grace and celebration that he could scarcely believe his eyes. Truly the revolution in the chess world is beginning in Africa!

Kasparov, “What can I say that the pictures do not say better? I have seen a lot in my travels but never anything like this! The enthusiasm, the optimism, the desire to be part of a greater movement in education and chess, it is all here from the halls of government to the kids. It’s really tremendous. If you had asked me when I was the world chess champion if anything could surpass the emotion of winning the highest title, I would have said no. Now I must reconsider. Africa is rising and will change chess forever!” 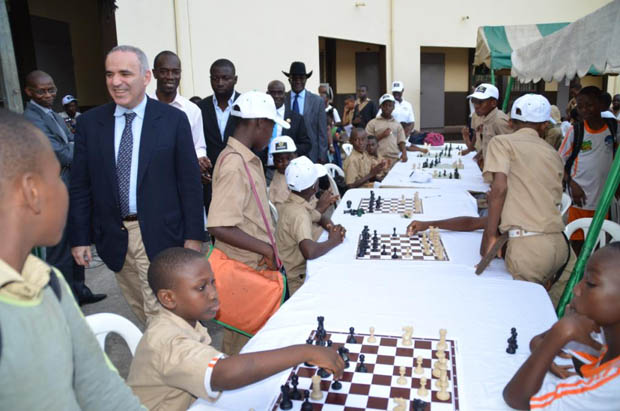 “It is not a daily surprise, or an hourly one, but one each and every 15 minutes!” – Garry Kasparov speaking at the closing dinner of his stay in Abidjan.

The private jet chartered by a businessman and friend of GK flew along the African west coast, heading south.

Arrived in Conakry for a stopover of 4 hours, the aircraft flew again at 1:30 pm. A few minutes earlier, Essis Essoh (president of the Ivorian federation) was worried, called Larbi Houari and said: “If you do not arrive before 3:30 pm, all protocol will be down the drain!” Nobody would have imagined that in Abidjan, a real organizational marvel was running.

It should be remembered that the visit of Garry to Ivory Coast was initially planned for a half-day. Also, nothing specific was planned in the program apart from an in-depth interview with the Ivorian chess federation. 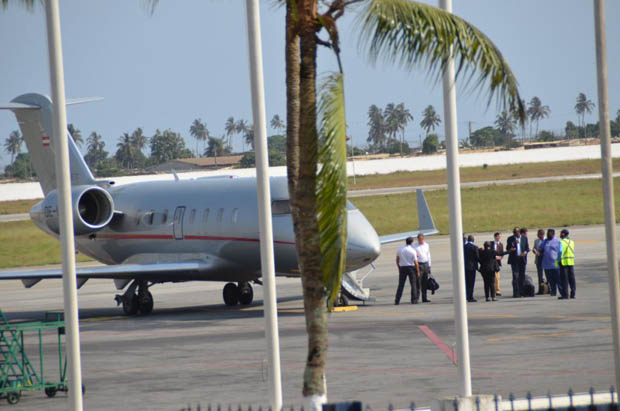 After a small word to the aircraft’s pilot, the destination was reached with quarter of an hour in advance. Essis Essoh and his deputy Charles Mathurin LORNG had made available for the guests a limousine protected by police forces, heading to the Ministry of Sports. The race against time began. It was 3:35 pm. 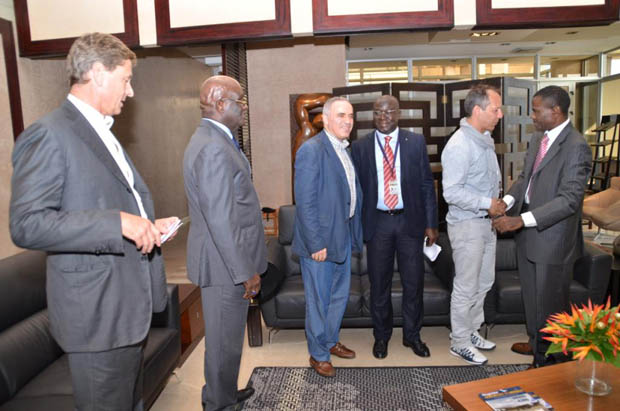 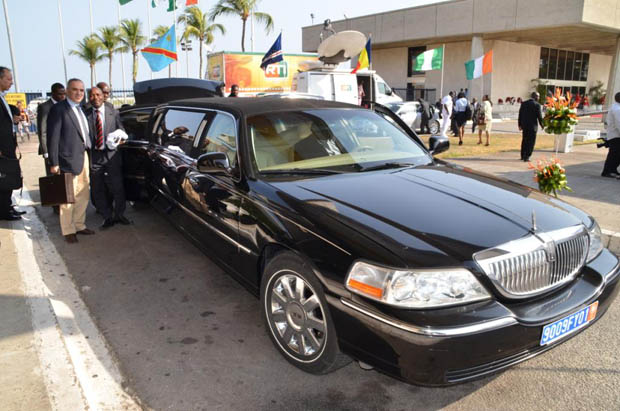 After thanking the guests for their visit, which honored the Ivory Coast, the Minister surprised the audience and said: “In the name of the President of the Republic and of the whole of the Government, I have the honor to announce that the game of chess will be integrated this year as a priority sport.” In other words, the visit of Kasparov, sustained by the Ivorian Federation effort and their conviction, has triggered a particular attention towards this noble game.

Spontaneously, Larbi Houari starts to applaud, immediately followed by Garry Kasparov and Eissis Essoh. There was even a talk about a budget that could be allocated! 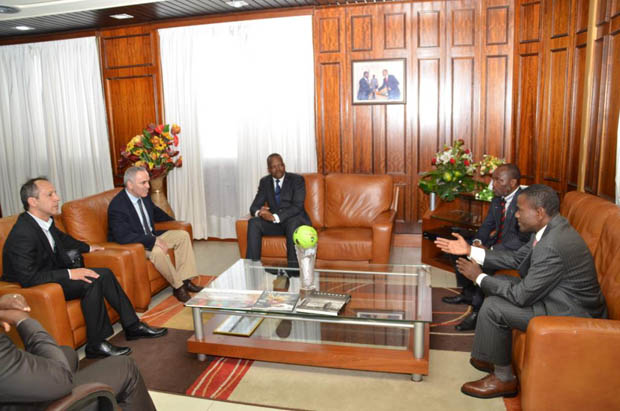 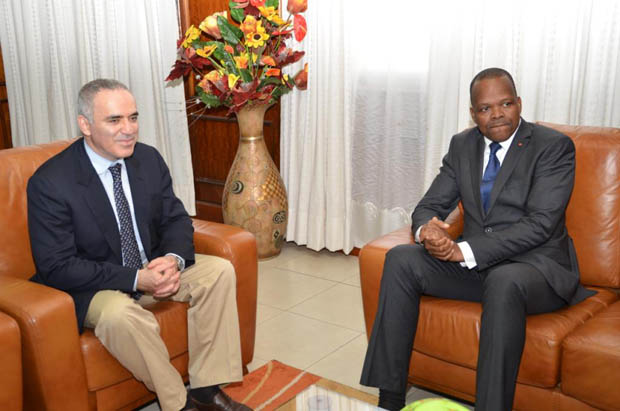 Garry Kasparov happily welcomed the Ministerial initiative, thanked him, on behalf of the chess world, for the interest that was given to this discipline. He explained not only his campaign to integrate chess in schools, but also the many benefits of this inexpensive sport.

Then Garry Kasparov received traditional clothes and objects as gifts. 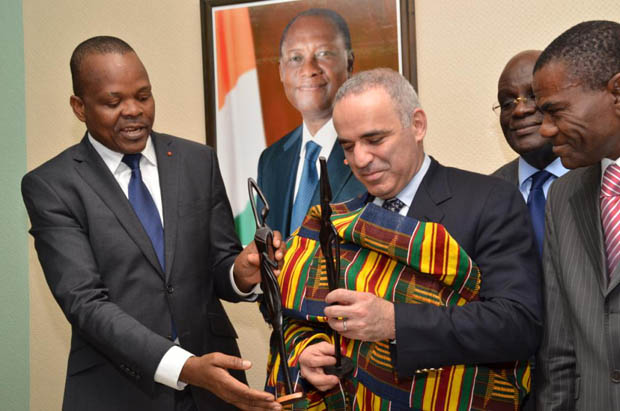 The Minister then said that he will be present at the closure dinner and after that said farewell to his guests.

Second appointment in the journey: the first vice-president of the national assembly, Madam Fadika Sarra SAKO.

Beyond the sport, the integration of chess at school will need to be passed through a bill, so it is natural that Garry Kasparov tried to convince the Ivorian deputies concerning the merits of this action. 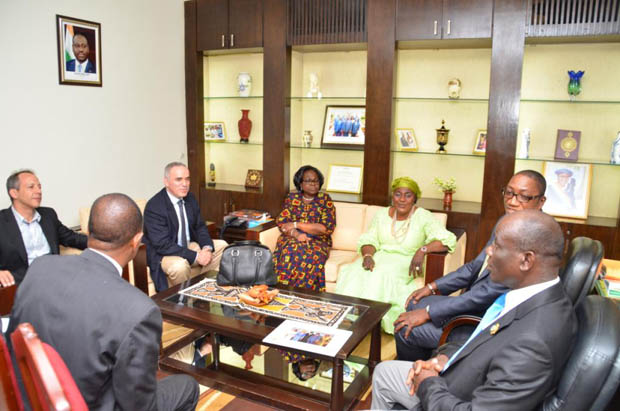 This is a critical time, when the game of chess can grow in a country that is much in need of it.

To the sides of Fadika Sarra Sako, the second vice-president Madam Amah Tehoua, the deputy Mr. Toure Yacouba and other honorable members of the Ivorian national assembly share questions. 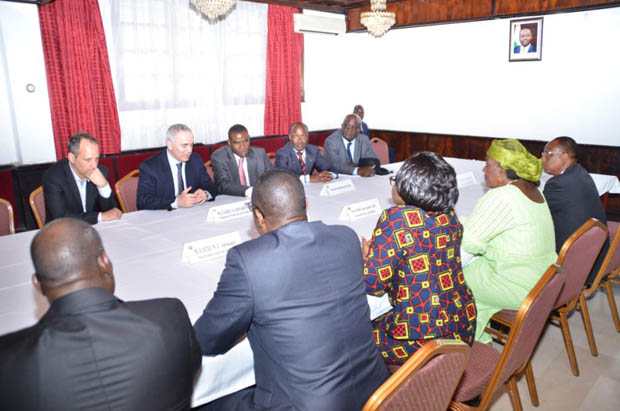 Why the game of chess and not other  games? Do you have any statistical results to communicate so as to support this folder? And in each time, Garry Kasparov answers promptly. What better ambassador to defend the game of chess on the planet?

At the end of these exchanges, the first vice-chairperson Fadika Sako concluded:

“We have truly been convinced by your first sentence. It remains for us to present and to submit our findings to the National Assembly’s President so that the bill drafting can be decided on.” 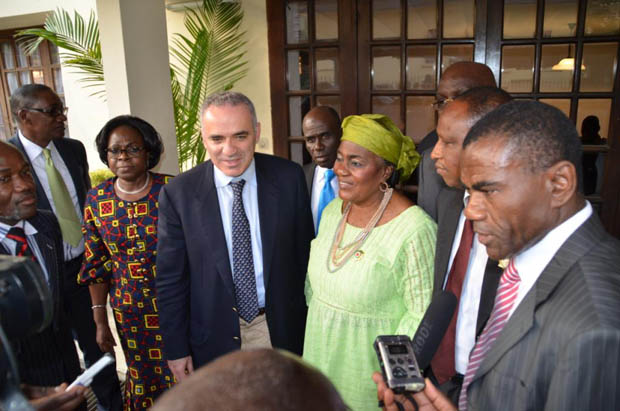 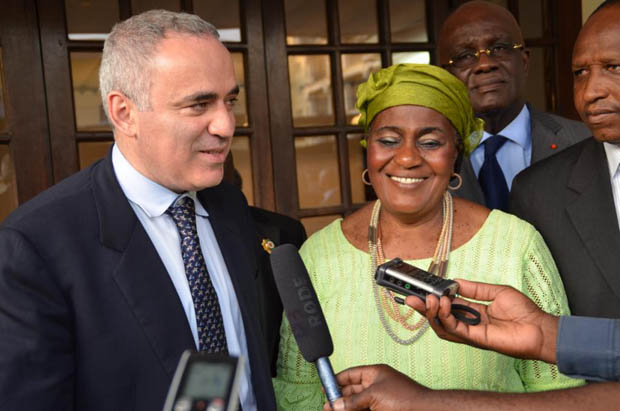 After a few questions from journalists, Garry Kasparov was finally allowed to return to his hotel … for 20 minutes.

Visit to a school in Abidjan 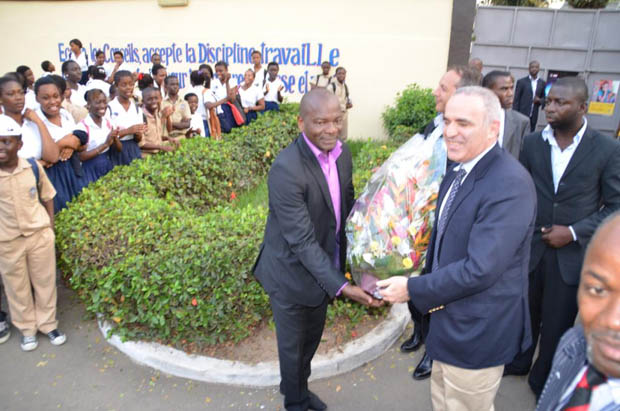 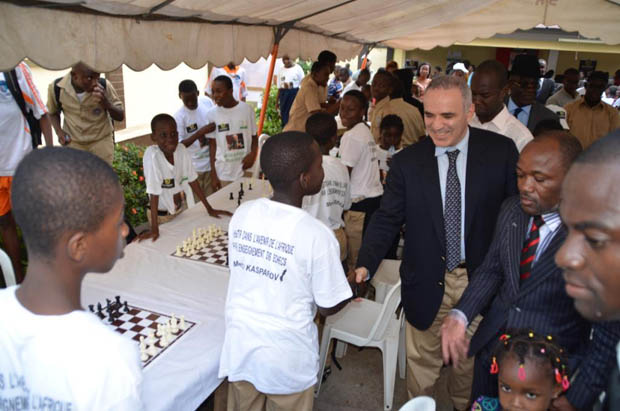 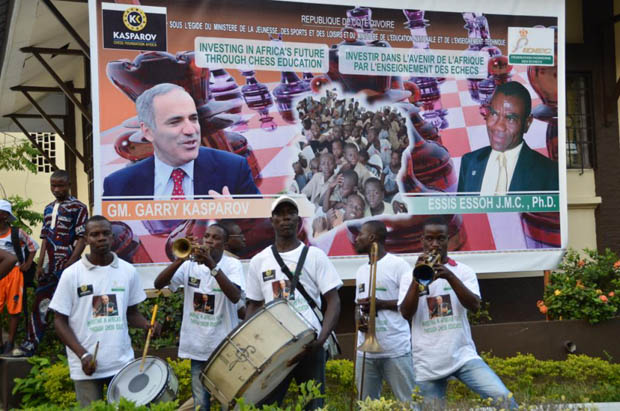 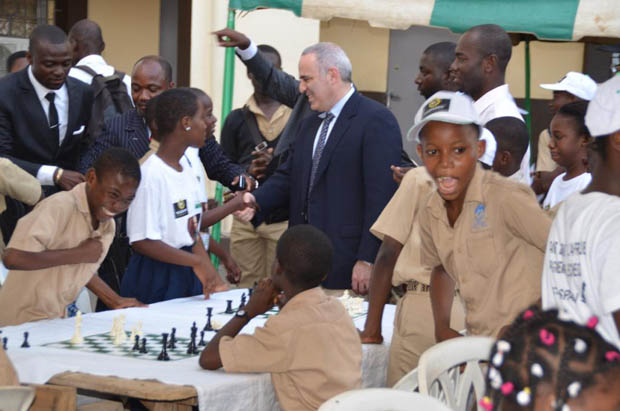 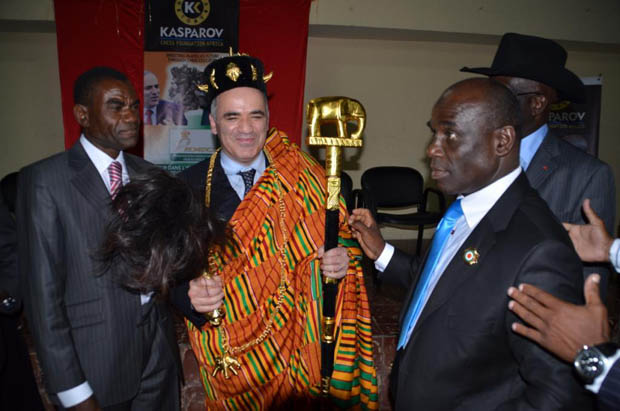 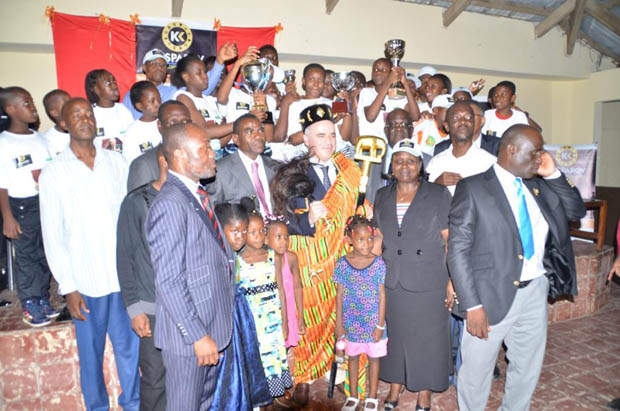 Garry Kasparov cannot believe his eyes, he is become a traditional African king, the “king of hearts.” (“Le Roi des Coeurs“)  It welcomes children who tell him their devotion.

He says and repeats the benefits of chess encouraged and apologizes for not being able to stay longer with them, among them. 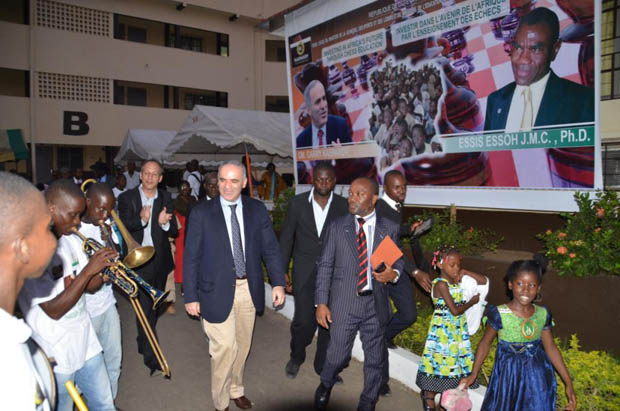 Garry Kasparov sad to leave the kids so quick…

The official press conference took place at the Pullman hotel. Garry Kasparov and Eissis Essoh responded to different questions while discussing the very rapid advances in the campaign to raise awareness among the state’s highest authorities. 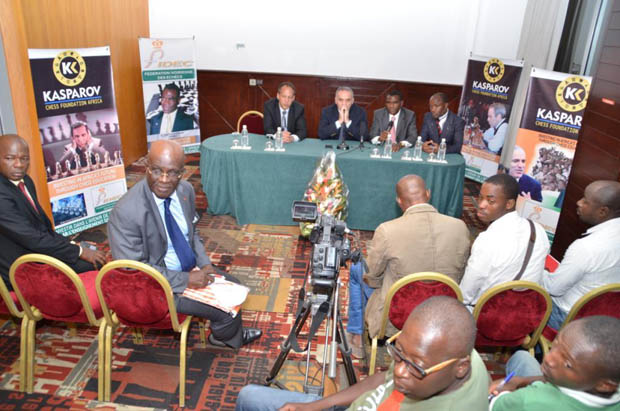 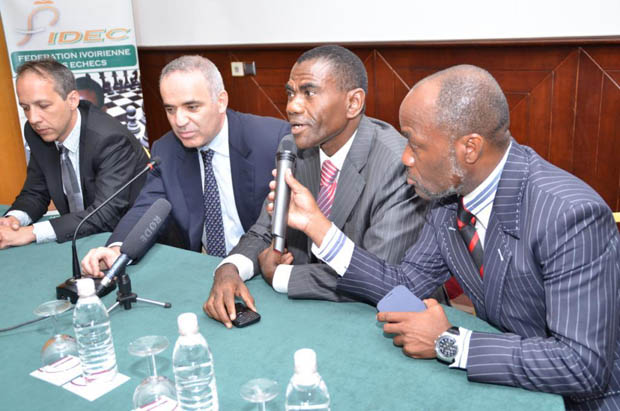 The Sports Minister Alain Lobognon was present in the room provided for the cocktail party. GK thanked the journalists and went to the lounge where all the Ivory Coast Chess leaders were awaiting him. 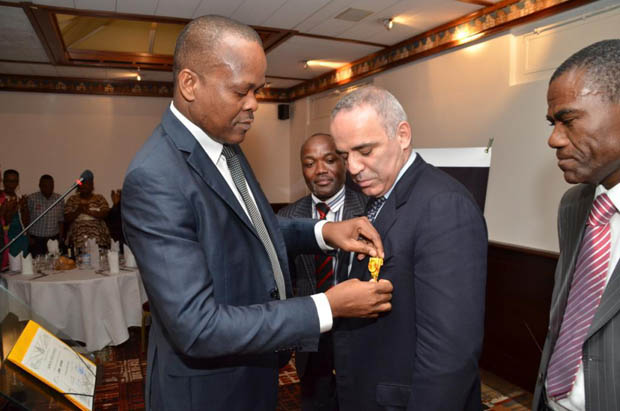 Presidents of clubs, referees and players came specifically to see Garry Kasparov “in real life”. Yes, at the end, he was for real among them and for them!

Alain Lobognon spoke to the chairmen of clubs and the Federation “I would like to challenge you, give me 10,000 chess players by the end of the year!” He called on Garry Kasparov, whom he wanted to give a special prize: the Athlete Medal of Merit, highest distinction of its kind in the Ivory Coast.

It is the culmination of a unique career, which lead to fame without equal. It is also an honor for Garry Kasparov who concluded much moved:

“It is very rare that I grope for words but now, it’s the case!” 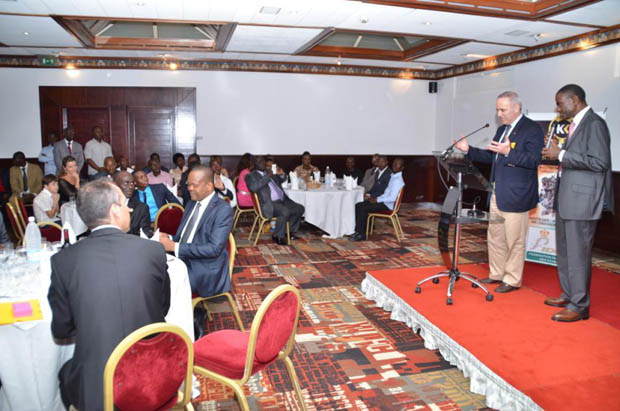